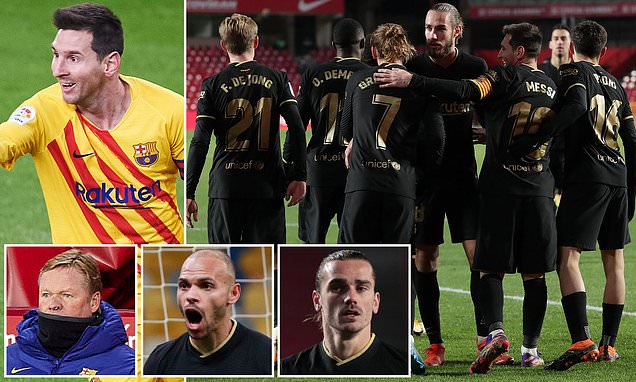 How Koeman’s Barcelona have clawed their way back into the title picture: Errors at the back have vanished, in-form Griezmann is being pushed by Braithwaite… and star man Messi is back to his imperious best after putting his future to one side

It seemed Barcelona were facing a struggle to get into the top four before Christmas. Now they are four points off the leaders and their top scorer Leo Messi is also La Liga’s top scorer.

It’s true that the gap at the top opens up to 13 if Atletico Madrid win their three in hand but with a few dropped points for the leaders the impossible becomes only improbable for Ronald Koeman’s side.

So what’s changed? Messi’s interview on prime time Spanish TV seemed to blow away a lot of cobwebs. Competition from Martin Braithwaite seems to have brought the best out of Antoine Griezmann, the silly mistakes at the back are gone, Ousmane Dembele is back and Pedri’s progress seems to know no bounds. 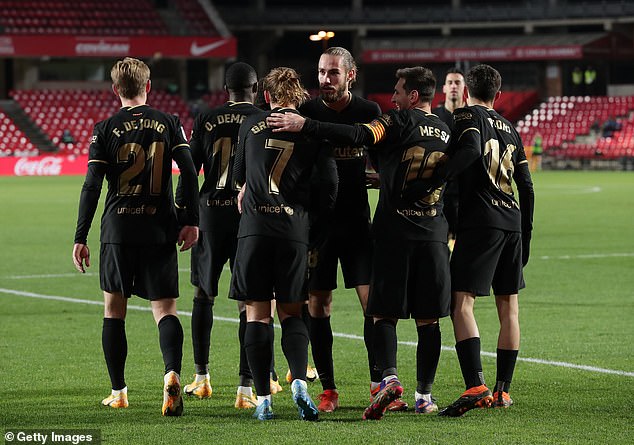 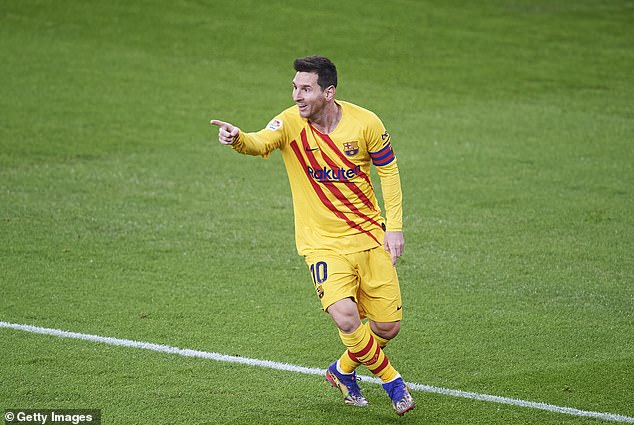 Messi backed Koeman in the interview that aired two weeks ago. He also said he was happier now than he was in the summer. A weight seemed to lift from his shoulders after the broadcast. He had put an end to speculation he would be busy negotiating his future through January. And at the same time he made it clear he could still leave in the summer but if he did he wanted it to be on good terms. It gave him breathing space, clarified the situation and allowed him to concentrate on his football.

His head seems clearer and his finishing has become more precise. He scored twice against Granada on Saturday but he also hit the post twice and scored a goal ruled out because he was half a shoulder offside. It could easily have been five. As it is he is now on 11 goals and back out in front as he bids to end the season as La Liga’s top scorer for the fifth straight season. 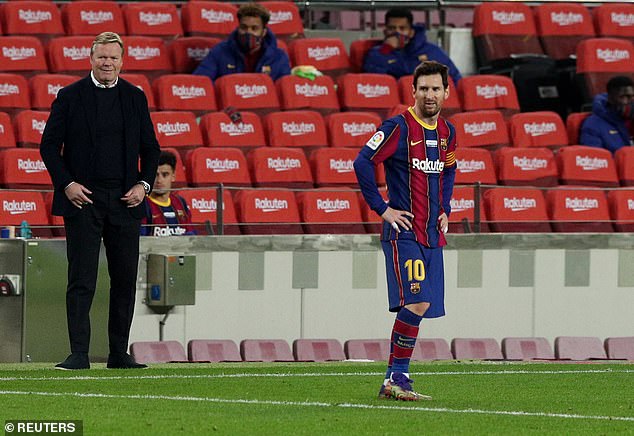 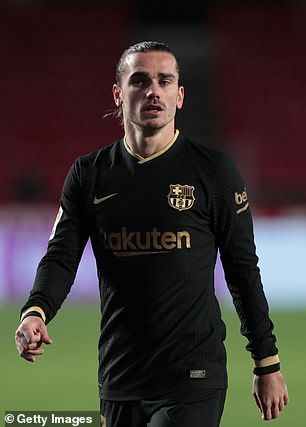 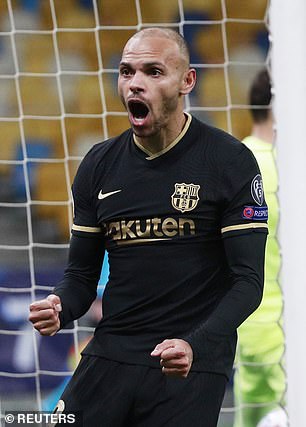 His mood has also been helped by the improved form of those around him. First Braithwaite came into the side and did a little of the back-to-goal work that Luis Suarez had previously done for the team. In the last game of the year Griezmann was left on the bench for the third time this season with the Dane’s work-rate preferred to the former Atletico Madrid forward’s greater quality.

Griezmann’s response has been positive. His two-goal performance against Granada, added to his display against Athletic in the previous game setting up Messi in a 3-2 win.

And with Griezmann getting back to his best Barcelona’s first choice front three now looks settled with Ousmane Dembele’s pace the essential final piece of the jigsaw. Koeman needs a quicker more direct player to open up space for Messi and Griezmann and with Ansu Fati out until March it’s important that Dembele stays fit and offers that. 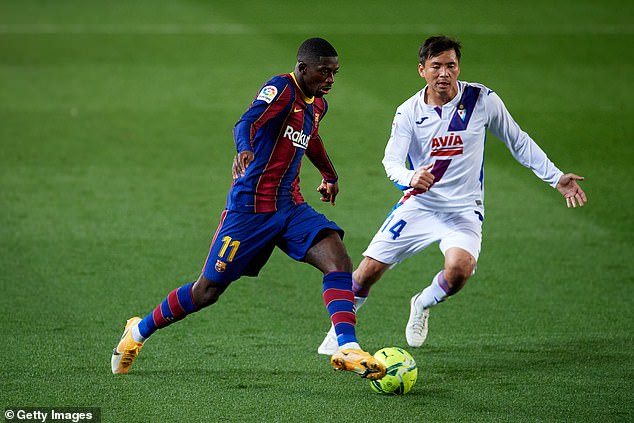 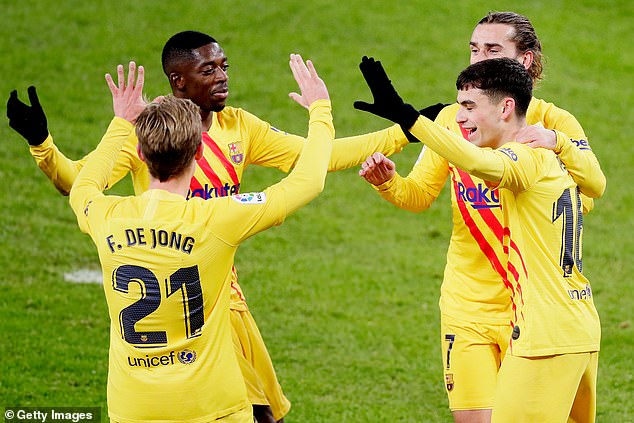 He has given the team the acceleration they so need in recent weeks and his all round play has improved too. His exquisite assist for Griezmann in the win over Granada was evidence of that.

And if Koeman finally has a settled front three he can also feel pretty sure about what his best midfield trio is. Pedri and Frenkie de Jong are now the midfield links to the forward line that were so missing earlier in the season that Messi had to spend too much time coming deep to look for the ball. All three linked up in Granada when Messi’s lofted pass picked out De Jong and he headed the ball down for Pedri to score.

Add all that to the sudden eradication of silly mistakes that had littered the earlier part of the campaign and Barcelona’s away form has been transformed. They have now won their last four on the road, having previously only won one of their first five away games of the season. 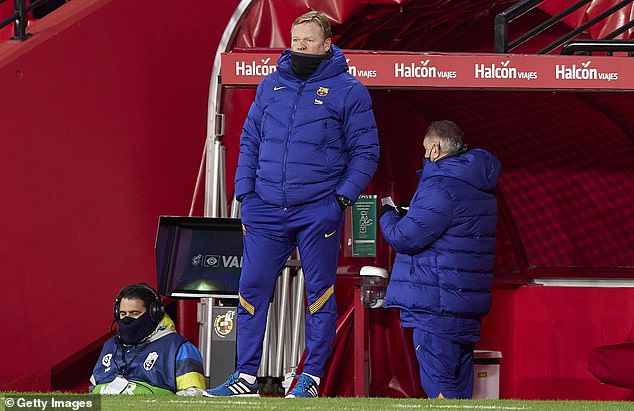 There are still flaws, but Barca’s title hopes have gone from impossible to improbable

Koeman will know that there are still major flaws in his squad. Athletic Bilbao scored against them in just three minutes last week and could have doubled their advantage at any time in the next 20 minutes before Barcelona tightened up.

Sergio Busquets remains the best alternative Koeman has to anchor midfield and that’s an indictment of the poor planning behind this squad. The 32-year-old has needed replacing now for several seasons and the failure to do so may yet cost Barcelona any success this season.

But behind him the emergence of 20-year-old Sergino Dest, 21-year-old Ronald Araujo, and 21-year-old Oscar Mingueza are all reasons for Barcelona supporters to be cheerful. And ahead of him, the form of Messi, Pedri, De Jong, Griezmann and Dembele have at least put Barcelona back in the race.