Manchester United manager Ole Gunnar Solskjaer has called for stern action and education in the wake of "unacceptable" alleged racist abuse aimed at his players during their Premier League win at Manchester City.

The Etihad Stadium bore witness to a match as thrilling as it was surprising as United overcame the reigning champions 2-1 thanks to goals from Marcus Rashford and Anthony Martial. 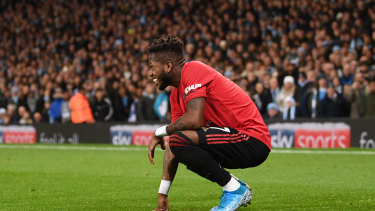 Fred of Manchester United reacts after being hit by a lighter thrown from the crowd at Etihad Stadium.Credit:Getty

The police said no arrests had been made and enquires were ongoing.

There were also reports of projectiles being thrown at players as tempers boiled over in the stands, with Fred appearing to be hit by an object hurled from the crowd as the visitors prepared to take a corner.

"Fred and Jesse [Lingard] were in the corner, taking a corner, and I've seen the video, heard from the boys," United manager Ole Gunnar Solskjaer said.

"We keep talking about it every bloody week.

"But he's been caught on camera. He should, in my opinion, never be allowed into a football ground again and I've seen the video. Unacceptable.

"So I am sure that City and the authorities will deal with it."

Asked about Fred's wellbeing, Solskjaer said: "It's affected both him and Jesse, of course… I am sure they'll feel sorry for them as well because it's an act of ignorance." 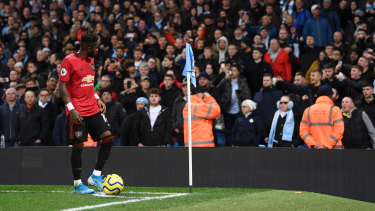 Fred looks to the crowd as missiles are thrown from the stands.Credit:Getty

We keep talking about it every bloody week. But he's been caught on camera…

"Unfortunately, this is happening in some stadiums. It happened here, it happened in Ukraine with some friends. It's sad, but we have to keep our heads up and forget about that," he told ESPN Brazil.

Racism has become an alarmingly frequent topic in football this season, across Europe.

In the English fourth tier on Saturday, Forest Green Rovers pledged to take stringent action against a supporter for racially abusing a Scunthorpe player during the League Two game.

Asked whether sanctions should be meted out to City, Solskjaer responded: "Why don't we educate him instead?

"It's not City's fault, it's his – and that should be educated… Nothing to do with Man City as a football club, no."

"The club operates a zero-tolerance policy regarding discrimination of any kind, and anyone found guilty of racial abuse will be banned from the club for life," City's statement read.

"I support the statement the club has done," he said. "So, hopefully we are going to solve it and hopefully avoid it again and it doesn't happen again."