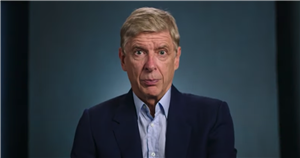 Arsene Wenger claims that "nobody scared" him in football in the first trailer for a new documentary that pulls back the curtain on the former Arsenal manager's life and career.

Arsene Wenger: Invincible paints a definitive portrait of one of football's greatest ever managers and reflects on his career in his own words.

Wenger touches on his 'addiction' to football in the maiden promotional footage for the new film and admits that "hating to lose makes you inhuman."

The documentary touches on key moments from Wenger's four decades in football, including the unbeaten 2003/04 campaign, his departure from Arsenal after 22 years and his rivalry with Ferguson.

The film has been produced by Noah Media, who were also behind the critically acclaimed football documentaries Finding Jack Charlton and Bobby Robson: More Than A Manager.

Discussing Arsenal's unrivalled invincible season in the trailer, Wenger reveals that "I set them the target of winning the championship without losing a game."

The Gunners went 49 Premier League matches without defeat between May 2003 and October 2004, winning their third league title under Wenger in the process.

Where does Arsene Wenger rank amongst the greatest managers of all time? Let us know in the comments section below.

Wenger's decision to set this objective came from his childhood as he explains that "My father never told me 'well done', he said 'you can do better.'"

Bergkamp describes the football Arsenal played during that run as "close to perfection".

For many, Wenger's time as a Premier League manager is defined by his rivalry with legendary Manchester United boss Sir Alex Ferguson.

It was Ferguson's side that ended Arsenal's record breaking unbeaten run in 2004 and he also managed United to an 8-2 thrashing of Wenger's Gunners in 2011.

However, Ferguson speaks highly of Wenger in the trailer, which touches on their rivalry, as he declares of the unbeaten season: "The achievement stands above everything else."

Wenger stepped down as Arsenal manager at the end of the 2017/18 season after winning three league titles and seven FA Cups after being appointed in 1996.

His exit came at the request of the club, with Wenger later revealing he had wanted to stay an extra year to see out his contract.

"It would have been easier if he had made the decision," admits Bergkamp in the trailer.

Reflecting on his farewell to the Arsenal fans, Wenger says "You realise that the end of something is like a funeral."

As for Wenger's effect on his players, Henry states that "Arsene changed my life" during the trailer, the French forward scored 228 goals under Wenger at Arsenal and won the Premier League golden boot four times.

Meanwhile, his former captain Patrick Vieira says that "when the manager is defending you, you'll die for him."

Arsene Wenger: Invincible comes to cinemas from 11 November, and on Blu-ray, DVD and Digital Download on 22 November