Pierre-Emerick Aubameyang hailed Bernd Leno and David Luiz after his brace helped Arsenal beat Everton 3-2 at Emirates Stadium on Sunday evening. The Arsenal striker’s two strikes either side of half-time propelled him to the top of the Premier League scoring charts with 17 goals this season but he was keen to point out the help of his team-mates after the match.

Leno made a series of important saves in the second-half to maintain Arsenal’s lead while Luiz’s through ball allowed Aubameyang to grab his first when he slotted home past Jordan Pickford a la Thierry Henry.

“It was a tough week,” the Gabon international told Sky Sports, puffing his cheeks after the final whistle.

“It was hard today to find some energy at the end of the week (after the Europa League win at Olympiakos in midweek).

“Everybody is doing well and giving 100% to win the game. It’s always happy to have Bernd Leno – he saved a couple of times at the right moment.

JUST IN: Man Utd player ratings vs Watford: Bruno Fernandes shines but midfielder gets a 4 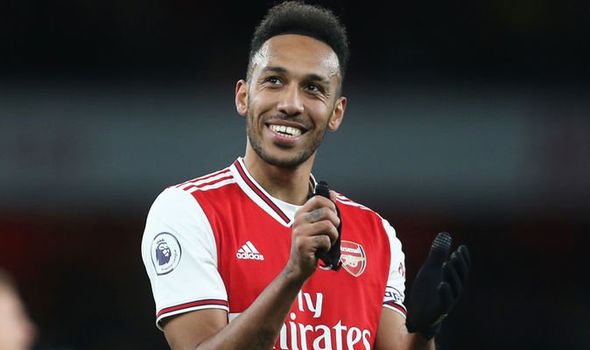 “We are proud of him and can count on him. For my first goal it was a great ball from David Luiz. I just ran through the defence and was one on one.”

Aubameyang’s second – a pinpoint header 23 seconds into the second-half – ultimately sealed three points for the Gunners but it was not plain sailing thereafter.

Everton hurried forward in search of an equaliser in the closing stages and Aubameyang’s efforts in defence were recognised by Mikel Arteta.

The Arsenal boss said: “It was an incredible amount of work Aubameyang was doing.

“Before I took over I had my questions about him but he showed his commitment. I wanted him to show if he wanted to do it and do it physically.

“Aubameyang is our most important player, no doubt the impact he has in this team. We will have to convince him to stay with us.”

“The best thing is the spirit we showed after coming back from Europe – three games in seven days,” the Spaniard added. 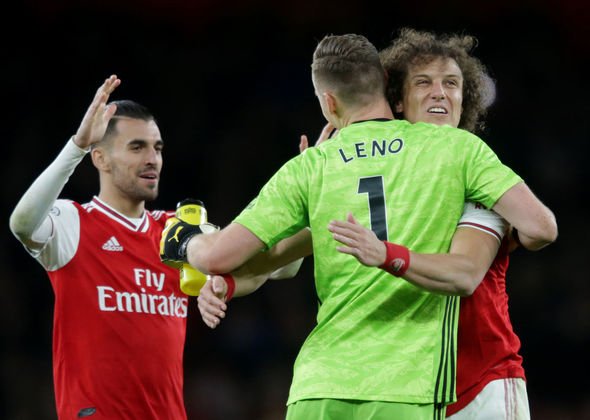 “And coming back after we went behind. The resilience they showed after they were absolutely shattered.

“Sead Kolasinac had a shoulder problem. Everybody was cramping. We could only change two players. We had to defend very, very deep.

“Leno was really good. In the right moment he saved us.”