Mikel Arteta has warned Alexandre Lacazette that Eddie Nketiah will be ready to take his place in the side, if he does not keep his foot on the gas. The Spaniard was delighted with his frontman’s performance as he struck the first Premier League goal of the new season, for a second time in his career.

He was the man on the spot to tap home in the first half after Willian’s close-range effort was saved by Marek Rodak.

Further goals from Gabriel Magalhaes and Pierre-Emerick Aubameyang capped a fine afternoon in west London for the Gunners.

There has been interest in Lacazette from Juventus and Atletico Madrid this summer but now he looks set to stay put.

While Arteta made it clear he wants to work with the former Lyon man, he did warn Lacazette that Nketiah is ready to take his place in the side.

JUST IN: Arsenal board and Mikel Arteta ‘in love’ with new £62m transfer target who can leave club 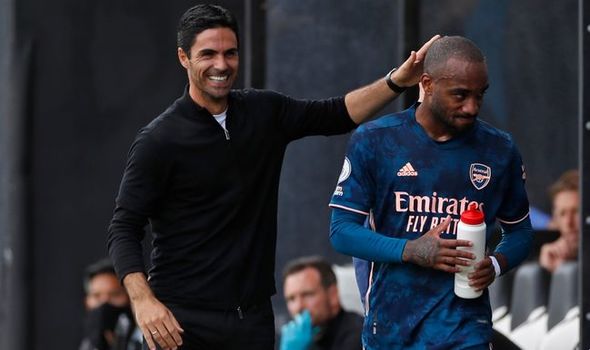 “Yes he is in my plans, he’s a player that I like a lot,” Arteta told BT Sport.

“But he knows he has Eddie in his back or next to him and he’s going to push him.

“Whoever is in better shape is going to play and it’s the same for the rest of the team.”

Nketiah was involved in a coming together with Dani Ceballos in the warm up.

He came on in place of Lacazette for the final three minutes of the match.

After the game, Lacazette committed his future to Arsenal to end any lingering speculation.

“I am really happy at Arsenal,” said the goalscorer.

“It is only the press and other people that say I am not. I want to play and win titles. We want to be aggressive with and without the ball and improve every aspect of our game.” 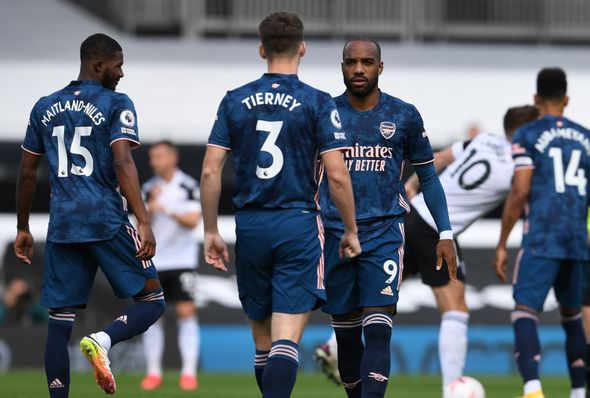 Arsenal sit top of the Premier League and will be delighted with yet another positive performance. Lacazette insisted that Arteta will not let the players get carried away, as he strives for perfection.

“It was the best way to start the season,” Lacazette told Arsenal’s official website.

“We wanted to win today and get the clean sheet. Defensively I think we did some good stuff and respected what the coach wanted. At the end, we won so everyone is happy today.

“He [Arteta] wants us to be perfect. We work a lot in the week for this kind of game because we know it’s really important for the season. We have to respect what he wants.

“We want to be aggressive with the ball and without the ball. We just want to improve in every aspect of the game. This is why we work every day, every week, to be better.”