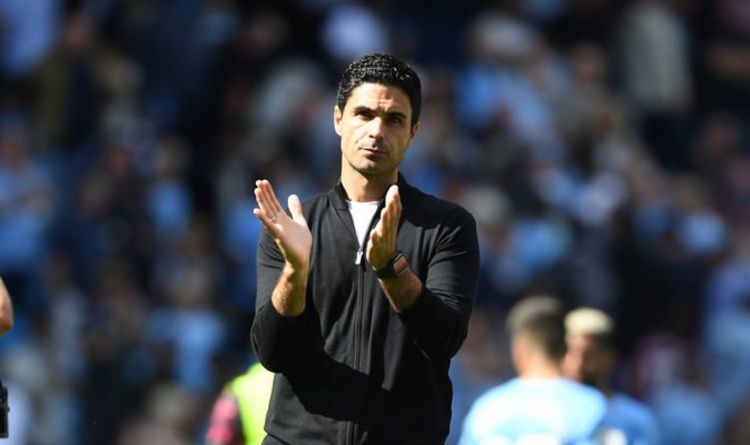 Arteta feels Aubameyang will be boosted by return of fans

Arsenal will be fretting over the expiring contracts of their stars next summer, with young talent Eddie Nketiah at the forefront of players who could leave on a free.

Nketiah, 22, joined Arsenal aged sixteen from Chelsea’s youth academy after his release from the Blues.

The Lewisham-born striker has gone from strength to strength at the Emirates Stadium, scoring 13 goals in what can mostly be considered sub appearances.

However, with the club’s key attackers Pierre-Emerick Aubameyang and Alexandre Lacazette ahead of him in the pecking order, Nketiah has found it hard to maintain a starting spot under Mikel Arteta.

The Gunners reportedly attempted to sell Nketiah in the summer transfer window, with Crystal Palace interested in the youngster.

JUST IN: Chelsea have been accused of blocking Arsenal’s transfer plans

However, the Eagles opted for Celtic talisman Odsonne Edouard instead after they couldn’t agree terms with Nketiah – leaving Arsenal fretting over his future.

The England U21 captain has just ten months left on his contract and can therefore leave on a free to foreign clubs next season if he agrees a pre-contract agreement in January.

And this would spell yet another disastrous setback in Arsenal’s torrid season.

Mikel Arteta’s men will be keen to avoid such a situation, especially as it has happened to other big clubs in the Premier League before.

Perhaps the most notable incident was Paul Pogba’s departure to Juventus, with the Frenchman leaving United at the age of 19, only to be signed back for a then-record transfer fee of £89million.

Pogba’s case has given clubs an indication as to what can happen when letting young players’ contracts run down – although it has also given players a new lease of life in considering their future.

And with first-team football limited at Arsenal, it could well be that Nketiah follows in Pogba’s footsteps.

Arsenal reportedly wanted £20m for the youngster, before reducing their asking price to just £12m at the end of the window.

But if Nketiah was to leave, not only would the Gunners miss out on a fee, but they’d not be able to insert a sell-on fee either.

The Gunners have started their season horrifically, entering the international break at the bottom of the table without scoring a goal.

But with fellow strugglers Norwich next up at home, they will look to pick up their first points of the season.