Arsenal stars appeared to be in buoyant moods as they jetted out to Lisbon ahead of Europa League clash against Sporting with the club closing in on their record number of wins in a row.

Unai Emery’s men will go in search of their 11th win on the bounce when they face Portugal giants Sporting on Thursday evening, which is only three away from their all-time record that came back in 1987.

The Arsenal squad departed London on Wednesday and are due to touch down in the Portuguese capital later this afternoon. 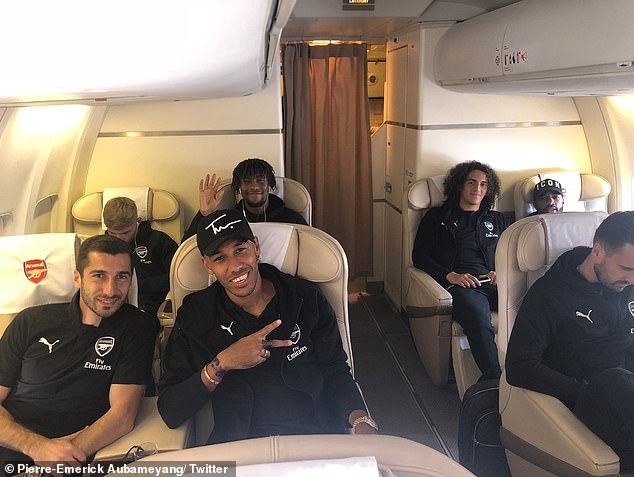 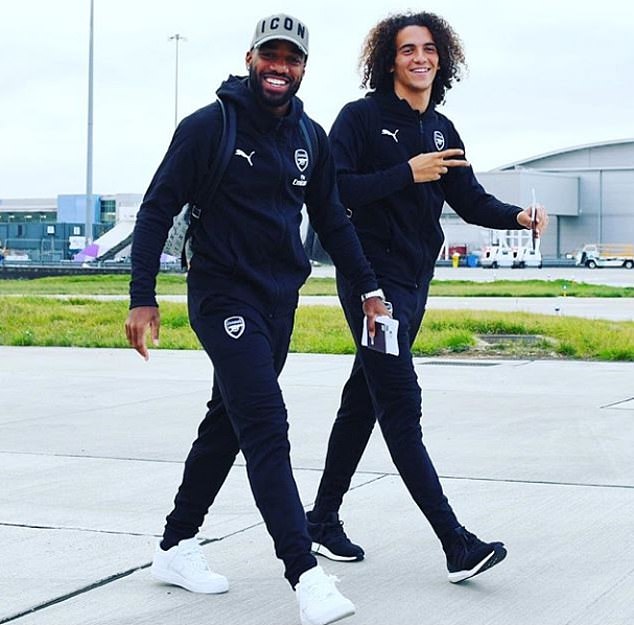 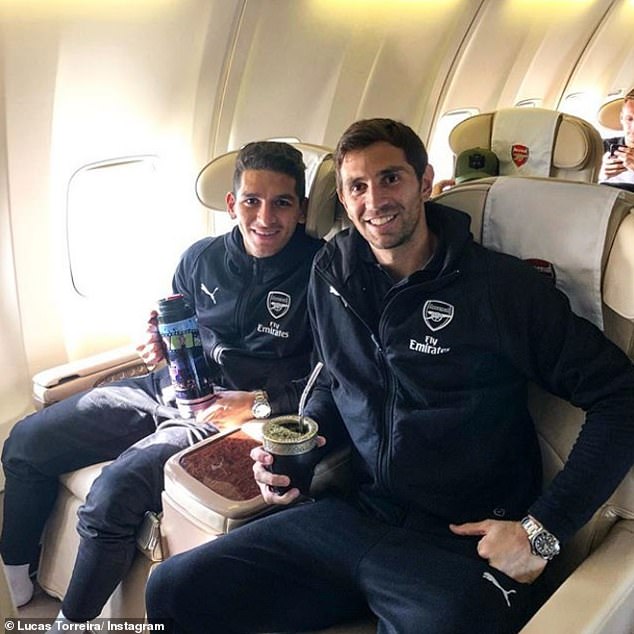 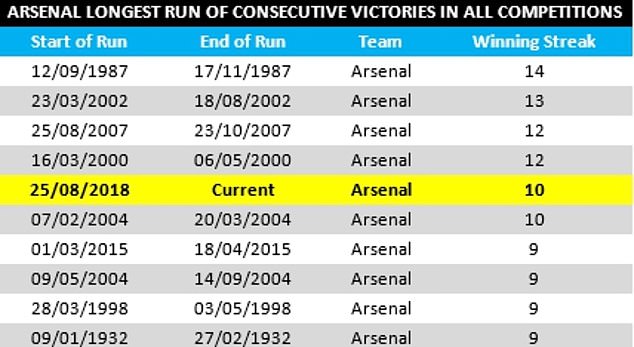 Pierre-Emerick Aubameyang, who has played a significant role in Arsenal’s winning run with four goals from his last two games, took to social media to post a picture of him with several of his team-mates sat in their seats during the flight.

Lucas Torreira also shared a snap of him and Emiliano Martinez on Instagram drinking mate tea out of a gourd during their flight to Lisbon.

After losing their opening two games of the season, Emery has overseen a complete turnaround in fortunes with his in-form Gunners side now on the verge of breaking a club record.

They will also be boosted by the return of Sokratis Papastathopoulos, who has travelled with the squad after missing their last game due to an ankle injury.

A victory on Thursday for Arsenal would bring them one step closer to that record of 14 straight wins and would also see them take control of Group E. 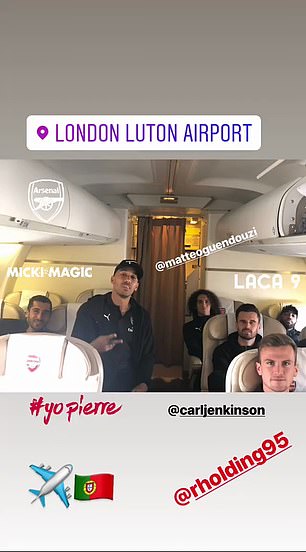 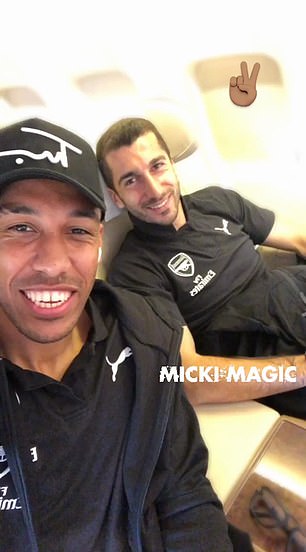 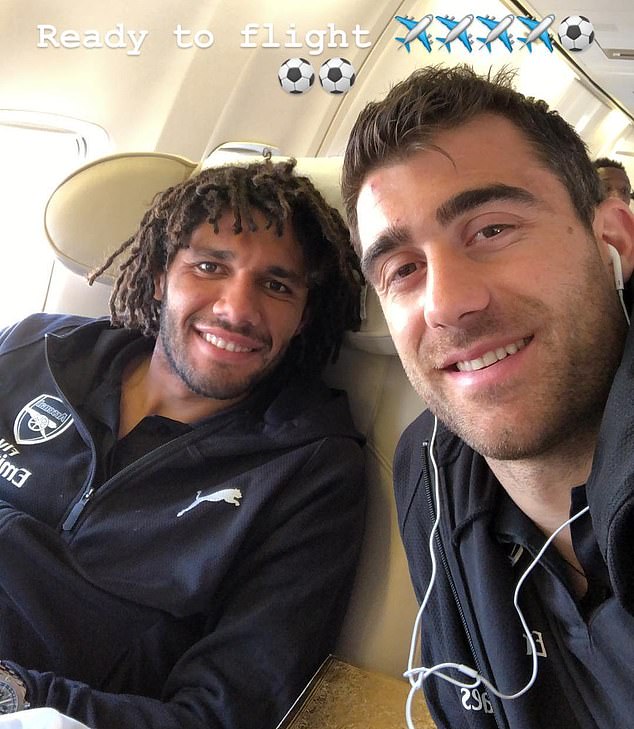 Mohamed Elneny with Sokratis Papastathopoulos, who recovered from an ankle issue to travel

Arsenal and Sporting have both taken maximum points from their opening two games and can take a giant leap to securing a place in the knockout rounds and to qualifying in top spot with three points on Thursday.

If Arsenal were to get the victory, they would need to beat Crystal Palace, Blackpool in the Carabao Cup and Liverpool to match the record of 87 and can break it with a win in the return fixture against Sporting.

Emery’s rejuvenated side have already equalled the best winning streak from the club’s invincible season in the 2003-04 campaign and have only registered four better runs in their history.

They head into the clash with Sporting as the overwhelming favourites and have been labelled as genuine Premier League title contenders following their gripping 3-1 win over Leicester on Monday. 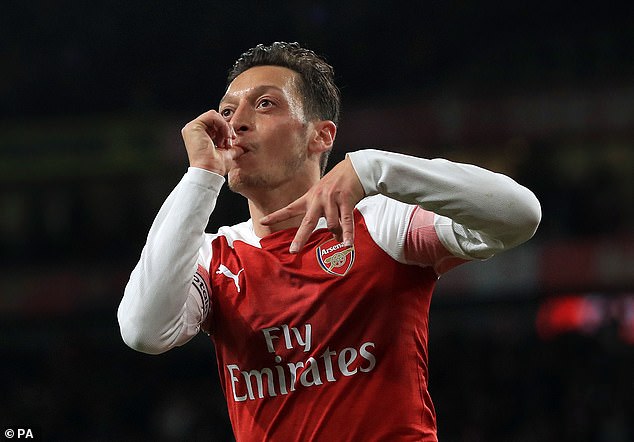 But the Arsenal boss is eager for his players’ to keep their feet firmly on the floor and has called for focus as they look to kick on.

‘I think we need to continue with the calm, with thinking each match like a big possibility to continue in our way,’ Emery said after Monday’s win.

– If Arsenal win all these games then that will be the club’s longest ever winning streak. They can equal the record of 14 – achieved in the 1987-88 season – if they win their next four.

‘And for us, it’s very important to win against Leicester because they are behind us, but near, and I think we are creating a big distance for another team that is behind us.

‘And then in front we are looking near other teams like Liverpool, like Manchester City, like Chelsea , but for us it isn’t important for us to think about the end.

‘I think we need to think about the next match, against Crystal Palace next Sunday, and also in another competition like the Europa League I think is very important for Thursday.

‘And continuing doing our way, improving, and individually and collectively also working on things, tactical things or individual things, to give them, to help them, to find the best performance. 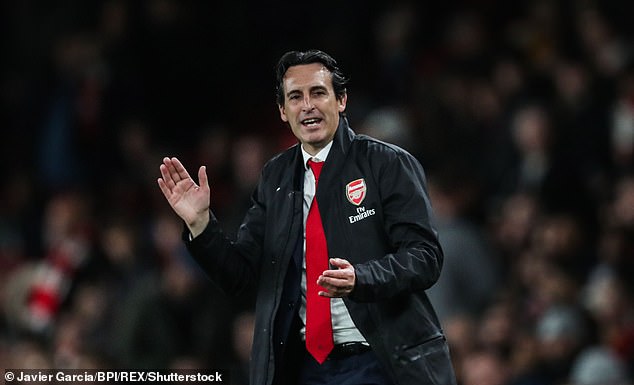