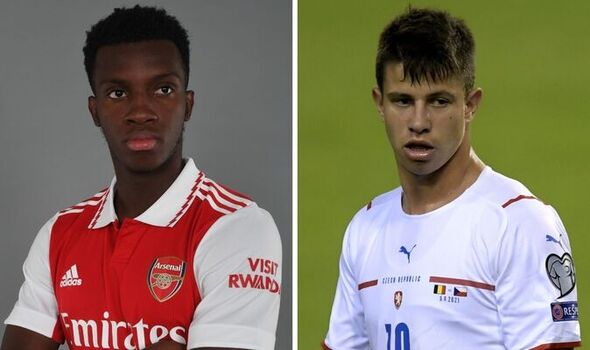 Arsenal’s plans to replace Eddie Nketiah have been dealt a major blow after Bayer Leverkusen pounced to agree a £19million deal for their striker target Adam Hlozek, according to reports in Germany. The Gunners have devised a long shortlist of potential options in attack as they prepare for the prospect of losing both Alexandre Lacazette and Nketiah, upon the expiry of their contracts.

Both are currently on course to depart at the end of June, although Mikel Arteta is still optimistic of keeping Nketiah, who he values highly.

The Spaniard is still quietly hopeful he can convince the 22-year-old Englishman to stay put after handing him regular game time towards the end of the season.

However, unless he can offer assurances of a starting berth, Nketiah looks set to move onto pastures new.

The Athletic reported on Tuesday that Sparta Prague centre-forward Hlozek had been identified as a replacement, given that he is another young striker with a high ceiling.

It’s clear the Czech Republic international would have to settle for a squad player role in Arteta’s squad but at just 19, he has all the tools to chip in with a respectable contribution of goals like Nketiah.

But, German newspaper SPORT1 are now reporting that Bayer Leverkusen have moved quickly to strike a deal worth in the region of £19m.

The deal has scuppered any plans Arsenal had to sign the striker, leaving the Gunners to go back to the drawing board.

Thankfully, the sheer number of players they have profiled means they are not short of options.

Gabriel Jesus remains Arteta and Edu’s priority in attack with talks set to recommence now the Premier League season has been conceded.

Arsenal remain confident they can entice the Brazilian international into a move to north London, despite failing to secure Champions League football for next season.

If they can’t, Roma’s Tammy Abraham, Lille’s Jonathan David and Dominic Calvert-Lewin of Everton are other options that have entered their thinking.

The plan is to sign a marquee No 9 – potentially two – while also adding a young striker to the squad like Hlozek, providing Nketiah departs.

The Gunners are still yet to replace Pierre-Emerick Aubameyang following his January departure to Barcelona on a free transfer.

“It is all about the balance,” he said. “Now we have cleared the deck and now we have a squad balance that is much more like what we want and much more affordable than what we had before.

“Now we have to start to add the top-quality pieces that they are not necessarily at 18, 19 or 20-years-old.