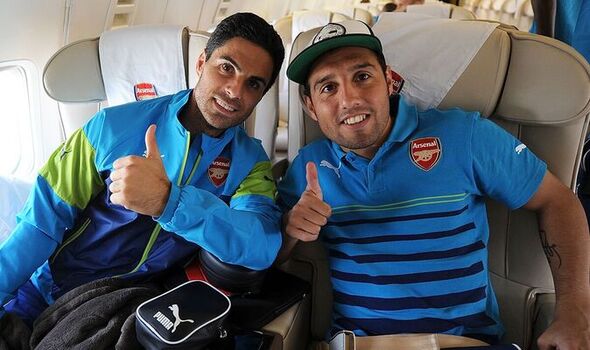 Arsenal boss Mikel Arteta can finally sign his own Santi Cazorla in the shape of Carlos Soler. Cazorla is a former team-mate of Arteta and is a player sorely missed by Gunners supporters.

Arsenal are in the market for a midfielder ahead of the January transfer window. And Paris Saint-Germain star Soler is the latest to be linked with a move to the Emirates.

A Spanish playmaker with an eye for goal is always going to draw similarities with Cazorla for Arsenal fans. Cazorla spent six years in north London between 2012 and 2018.

However, his final appearance came back in October 2016 in a Champions League tie against Ludogorets. He suffered what not only was a career-threatening injury but also one that could have seen his right foot amputated.

Cazorla’s departure will always be painful to Arsenal fans. But Arteta can finally soften the blow by signing a similar player in Soler.

French podcast France Bleu Paris claims Arsenal are interested in signing the 25-year-old. The Gunners were keen on Soler back in 2020 when he was at Valencia.

PSG only signed the Spain international on September 1 this year. But he is already linked with an exit from the Parc des Princes.

Soler has started just four Ligue 1 matches so far this season and only one of PSG’s Champions League group stage matches. His contract runs until 2027, so wouldn’t come cheap.

PSG only spent £17.2m on Soler but could be in line to make a large profit. He started his professional career at boyhood club Valencia and made 226 appearances in all competitions, scoring 36 goals.

He averaged a goal every 6.2 games for Valencia, the exact same ratio as Cazorla in his 180 appearances for Arsenal. Soler turns 26 in January, so would be just a year younger than Cazorla was when he made the move to the Premier League 10-and-a-half years ago.

But speaking in April this year, Soler rubbished claims he is similar to his compatriot. He told the Guardian: “You’re putting me alongside Cazorla or Juan [Mata] and David [Silva]? Nah.

“Look, it’s a compliment. They’re players with that ‘pause’ that maybe the Premier League didn’t have.

“It’s all so mad, so physical, that if you can adapt to the intensity and then make the right decision, find the right space, that gives you something. Football is ever more physical but the player that ‘arrives’, that filters the final pass can adapt well: like Pablo Fornals, say.”