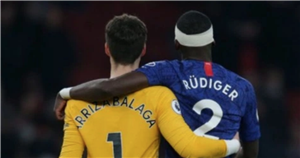 Antonio Rudiger has called Kepa Arrizabalaga his “brother” after the Chelsea pair had a training ground bust-up.

Blues boss Thomas Tuchel admitted "things got heated" in a "serious situation" in a session on Easter Sunday.

Team-mates had to separate the pair with Tuchel saying the argument stemmed from an incident in training.

And Rudiger has finally broken his silence on the whole thing with a simple post on social media.

Alongside a picture of himself and Kepa embracing, Rudiger wrote: “Mi Hermano” – translated to ‘My Brother’.

Kepa was on the bench, as he has been for the majority of the season, with Edouard Mendy first choice goalkeeper.

Tuchel had said of the bust-up: "It got heated up between Toni and Kepa. So we calmed the situation down immediately.

"The reaction was not OK. But how the guys handled the situation, especially Toni and Kepa, was amazing and showed how much respect they have for each other.

"They sorted it out straight after training in a very honest, humble and very direct way.

"That showed me they have very good character. Toni sorted it out directly, and it was a strong and brave thing to do."

While Chelsea midfielder Mateo Kovacic added: "These things happen in a family and we're a strong group.

"We spoke about it – it is all cleared and all done."