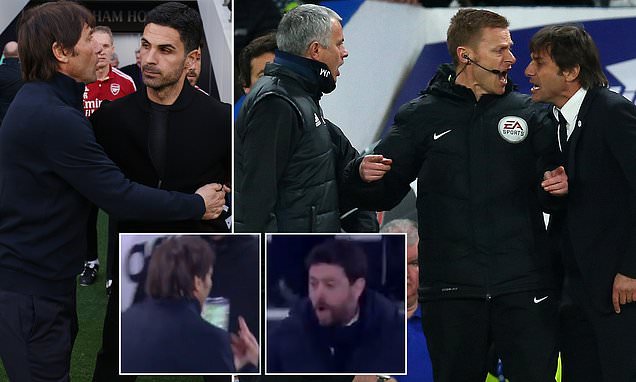 Antonio Conte brings bundles of passion to the sidelines and is not afraid to let people know what he feels about them.

During his managerial career he has had spats with players, referees, opposition managers, chairmen and even took out his frustrations on his own members of staff.

Arsenal manager Mikel Arteta was the latest to be on the end of a spiky Conte, with the Tottenham manager laying into his opposite number after their 3-0 victory on Thursday night. 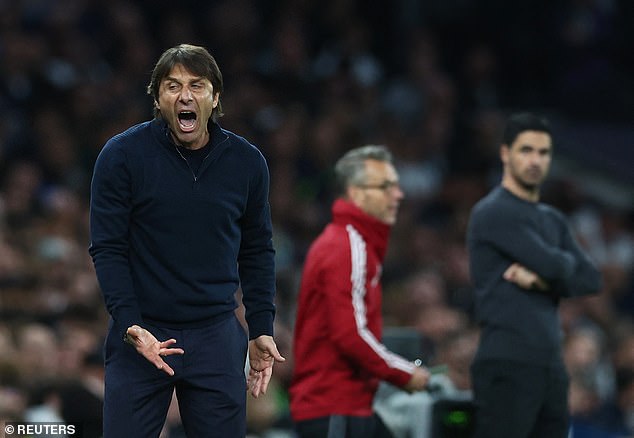 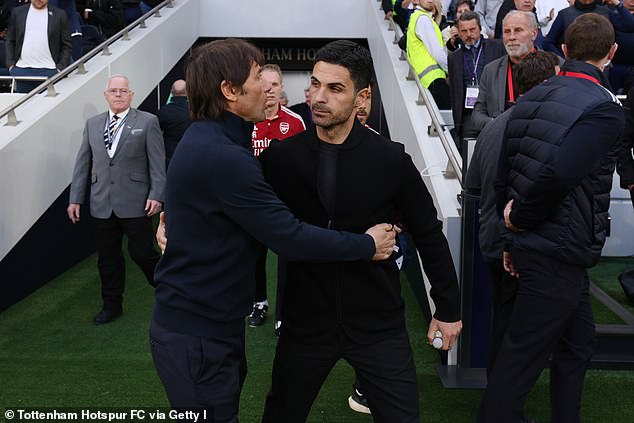 During the match, Cedric Soares gave away a penalty for a foul on Son Heung-min for the opener, and then a second yellow card was shown to Rob Holding after he seemed to push his elbow in to the face of the South Korean international.

An enraged Arteta refused to talk as he feared a suspension, adding that the ‘beautiful game had been destroyed’.

Spurs manager Conte was quick to hit back. The Italian said: ‘Mikel Arteta is doing a really good job but I listened to him complain a lot. I think he has to be focused more on his team and not complaining.

‘This is my advice. If he wants to take my advice it’s up to him. I don’t care. In six months I have listened to him complaining a lot. It’s not good.’

Sportsmail takes a look at Conte’s most explosive moments throughout his managerial career.

Tirade at his own coach

Angelo Alessio felt the wrath of Conte when he was assistant manager at Stamford Bridge during Chelsea’s 3-1 victory over Arsenal in February 2017.

The incident happened shortly before half-time when Gabriel Paulista forced a save from Thibaut Courtois with a free header from an Arsenal short corner.

Conte grabbed and shouted his assistant, pulling him off his chair and sending him down the touchline to relay a message to the team.

Chelsea ultimately won the match 3-1, as Conte celebrated one of the goals by falling into the arms of front row supporters.

Conte described Alessio as his ‘most regular victim’ after the match. 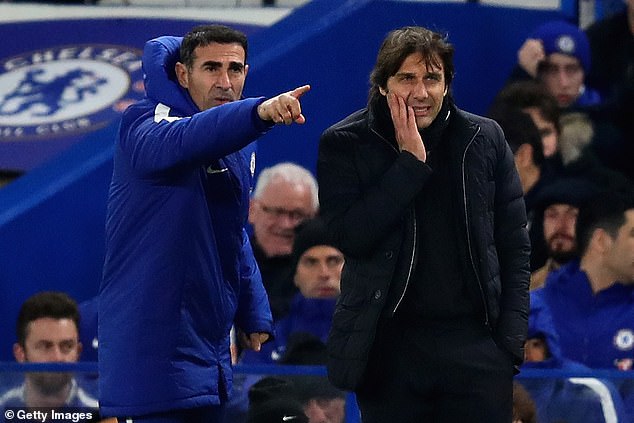 He told Sky Sports Italia: ‘Angelo is my right-hand man and also, if you will, my most regular ‘victim’ because he is the closest man to me, the one I have the most direct relationship with.

‘Basically, what happened is that before the game, in training, we had clearly prepared a number of situations arising from corners and so forth, and on that occasion Arsenal had a sixth man in the box, and that meant that [Victor] Moses, who was originally meant to be on the edge of the area, had to go mark the sixth man.

‘In such cases, [N’Golo] Kante needs to move back from his usual position further forward next to Costa, to take Moses’ place further back, so as not to leave that part of the box uncovered. They failed to do that, and I got angry [with Angelo].’

Asked jokingly by presenter and former Juventus teammate Paolo Di Canio if he would have done the same to fiery striker Diego Costa, Conte added: ‘Look, Paolo, in such moments I am capable of killing anybody.’

Antonio Conte’s most famous rival is Jose Mourinho with the pair involved in a number of spats, particularly when the Italian was at Chelsea, and Mourinho at Manchester United.

It started in October 2016 when Chelsea won 4-0 at Stamford Bridge and Conte riled up his opposite number by waving his arms to encourage the home fans to raise the volume in the final minutes. Mourinho was said to have told Conte: ‘You don’t celebrate like that a 4-0. You can at 1-0, otherwise it’s humiliating for us.’

Red mist then descended during their FA Cup quarter-final tie March 2017, when Conte was furious at the treatment of his players.

Eden Hazard was targeted by Ander Herrera who was sent off with two bookable offences on the Belgian, while Conte then exploded when Marcos Alonso was fouled by Antonio Valencia. 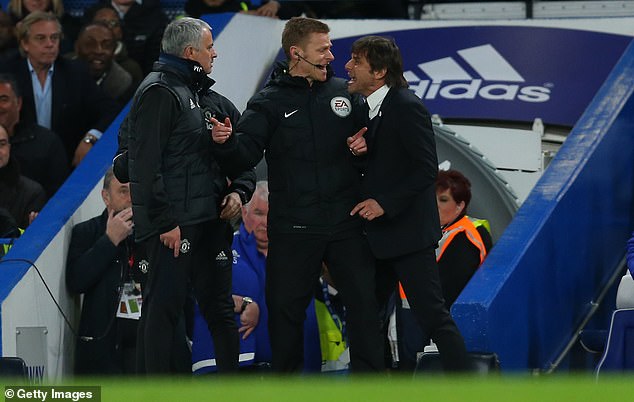 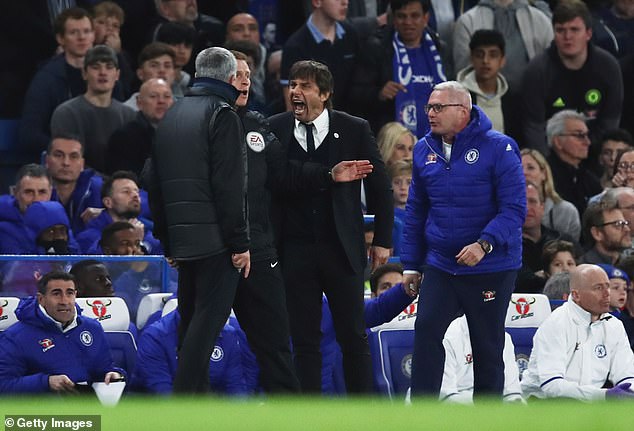 A furious Conte approached Mourinho on the touchline, shouting at the United manager and having to be restrained by the fourth official.

The pair exchanged jibes throughout the season which continued into the summer.

After winning the Premier League title, Conte warned his side against having ‘the Mourinho season’ in reference to 2015-16 when Chelsea had gone from winning the title the year before to finishing tenth.

The United manager in response to the remarks referred to rumours that Conte had artificially replaced his hair.

He said: ‘I could answer in so many different ways but I’m not going to lose my hair to speak about Antonio Conte.’

‘I don’t cry; I think the way to do it is ignore the players who are injured and focus on the players that are available. If I want to moan and cry like the others, I can cry for the next five minutes. But I don’t.’

Conte told his predecessor to mind his own business when the subject was raised to him later that night.

This continued into January when Mourinho suggested that rival managers behaved like ‘clowns’ on the touchline. 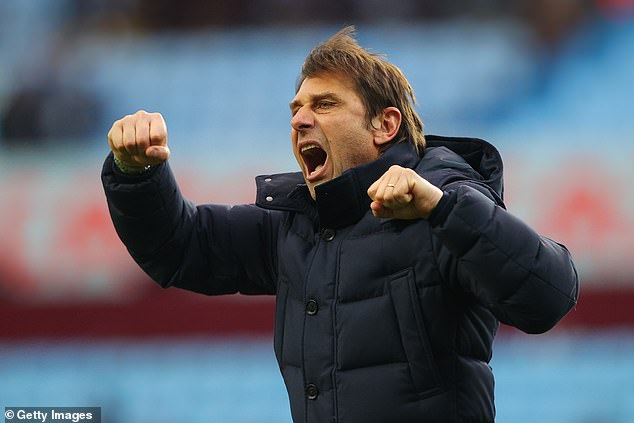 ‘Because I don’t behave as a clown on the touchline, it means that I lost my passion,’ he said.

‘I prefer to behave the way I am doing it, much more mature, better for my team and myself, I don’t think you have to behave like a crazy guy on the touchline to have that passion.’

When Conte was asked about Mourinho’s comments, he used the Italian phrase ‘demenza senile’ in relation to the Portuguese manager, which translates as senile dementia.

A Chelsea spokesperson later confirmed that he had meant to say amnesia.

‘Sometimes I think there is, I don’t know the name, but demenza senile… when you forget what you do in the past.’ 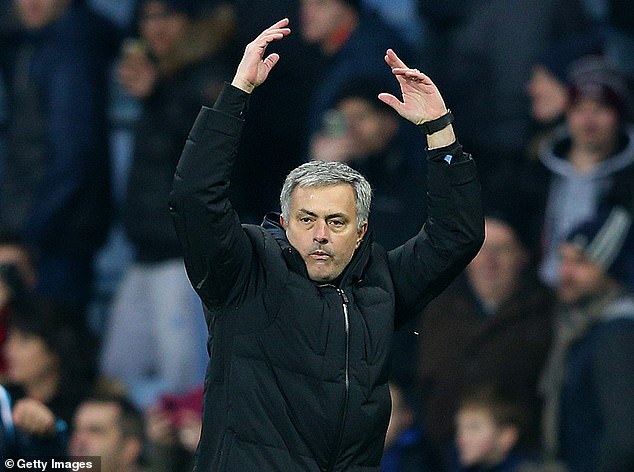 Hitting out at ‘little man’ Mourinho

The rivalry continued later that month when Mourinho, appearing to reference the Chelsea manager’s four-month ban for failing to report alleged match fixing, stated he would never be banned for the practice.

In August 2012 Conte began a four-month ban for failing to report alleged match-fixing involving Siena when he managed them in the 2010-11 Serie B season. The Italian was completely exonerated in May 2016.

In a lengthy outburst in response, Conte also brought up Mourinho’s show of support for former Leicester manager Claudio Ranieri, suggesting he was ‘fake’.

He said: ‘I think before you make this type of comment, before to hurt another person, you must pay great attention. 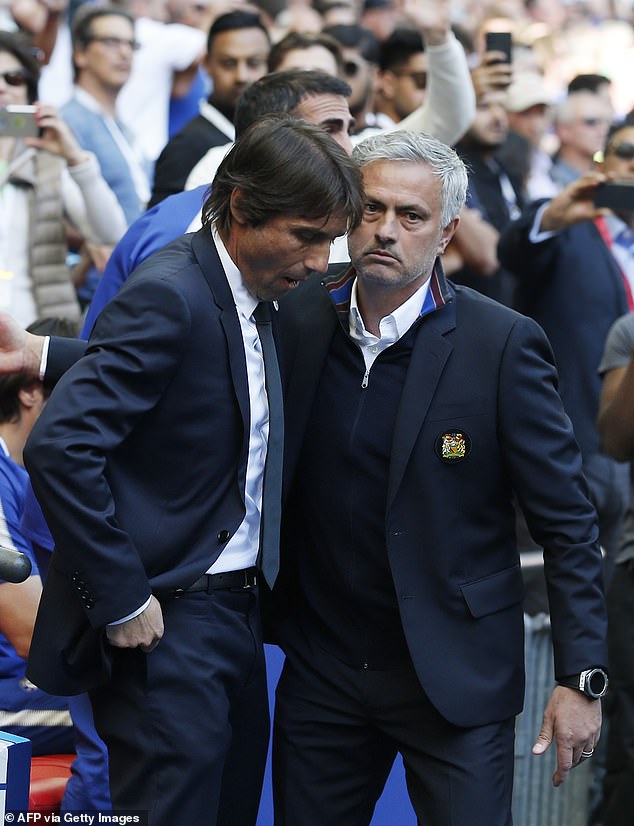 Regarding Ranieri, Conte said: ‘I remember a stupid example with Ranieri. When he offended Ranieri for his English.

‘Then when Ranieri was sacked he put on a shirt for Ranieri. You are a fake. I think you have good consideration for a person or not. It doesn’t change your opinion to be more sympathetic.

‘If you want to fight a person, you try to kill this person. And then after two years you try to help this person, because maybe it’s good for you, for your profile.’

Andrea Agnelli brought Conte back to the club in 2011 to succeed Luigi Delneri. The 51-year-old oversaw a great period of success as manager, winning three straight Serie A titles.

But things quickly soured between Conte and president Agnelli. The relationship with Agnelli became strained and Conte stepped down in 2014 with the club in the middle of pre-season.

Taking over bitter rivals Inter Milan strengthened the divide, though Agnelli claimed he would be welcome back to Turin with open arms. 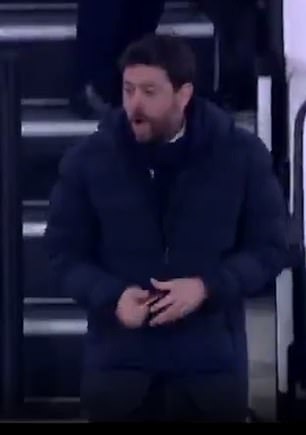 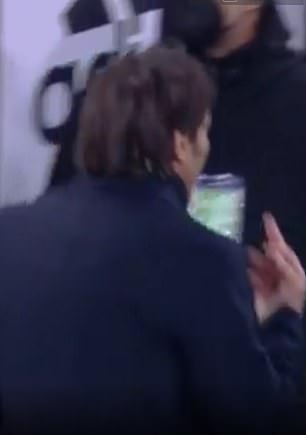 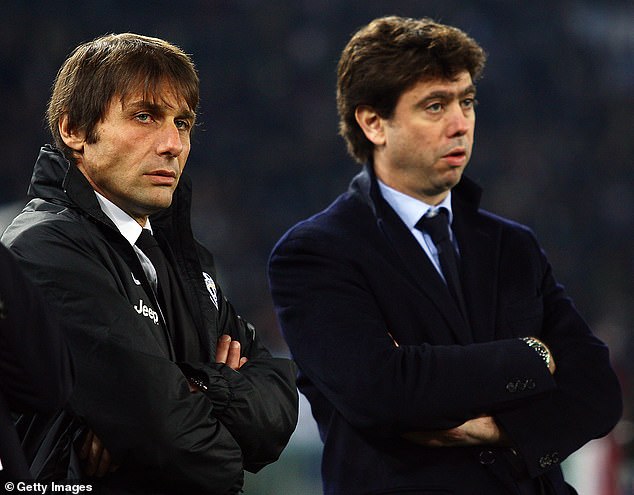 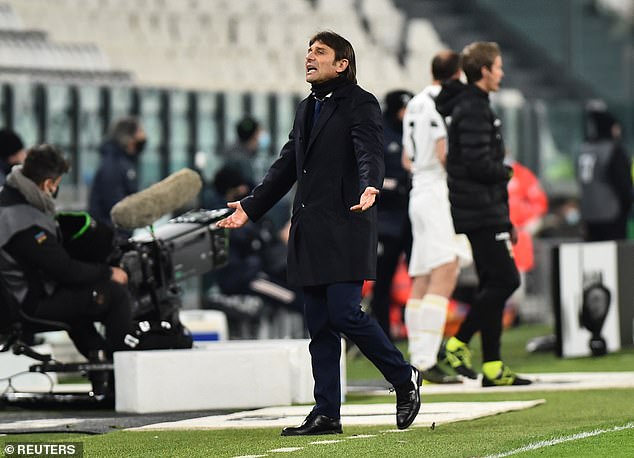 This didn’t look the case when Juventus held out for a goalless draw in Turin to progress to the Coppa Italia final with a 2-1 aggregate victory over Inter Milan.

Conte directed a middle finger gesture at Agnelli at half-time and following the full-time whistle, the Juventus chief raced from his seat down towards the Inter bench, and was heard shouting: ‘f*** off, shut up you a***hole’.

The Italian manager after the game blamed his former employers for the exchange.

‘Juventus should tell the truth,’ he told RAI 1. ‘I think the fourth official heard and saw what happened throughout the match.

‘They should be more polite in my opinion. They need more sportsmanship and respect for those who work.’

One player who successfully was able to wind up the former Inter Milan manager was former Sevilla midfielder Ever Banega.

Banega taunted the Inter Milan coach about his hair, getting under his skin in an fiery altercation which led to the Italian boss receiving a yellow card.

The pair were involved in a scuffle during the first-half of the Europa League final in Cologne, which the Spanish side won 3-2 thanks to a Romelu Lukaku own-goal.

Banega approached Conte and teased him saying: ‘Let’s see if that wig is real.’

The Italian manager responded: ‘I’ll see you after the game,’ and referee Danny Makkelie booked Conte for that comment during the intense match. 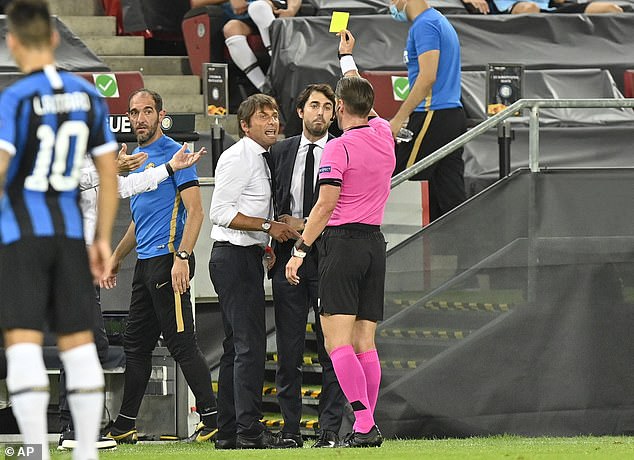 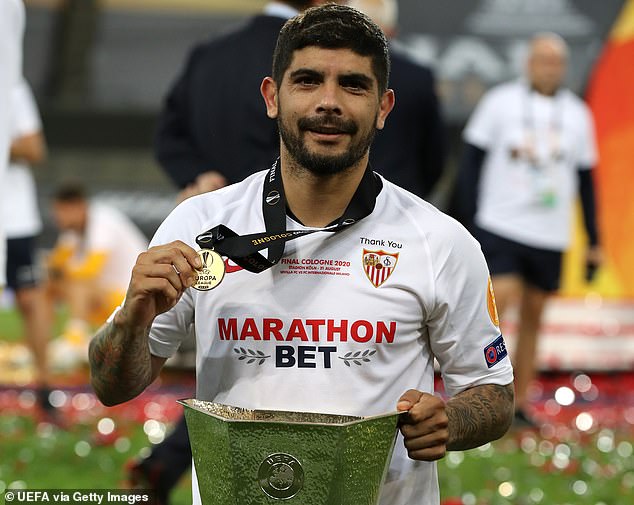 The Sevilla star, who helped his side win 3-2, told Conte, ‘Let’s see if that wig is real’

During his final season at Inter Milan, he was involved in a furious touchline bust-up with Lautaro Martinez, after the striker was substituted having come off the bench earlier in the game.

Martinez replaced the injured Alexis Sanchez in the 36th minute of their 3-1 victory over Roma in May 2021, but was replaced with 13 minutes to go by Andrea Pinamonti.

As the Argentine striker trudged off, he was seen casting a glance at the direction of Conte who paid no attention.

That was until he kicked a water bottle towards the direction of the dugout – causing the substitutes to duck for cover. 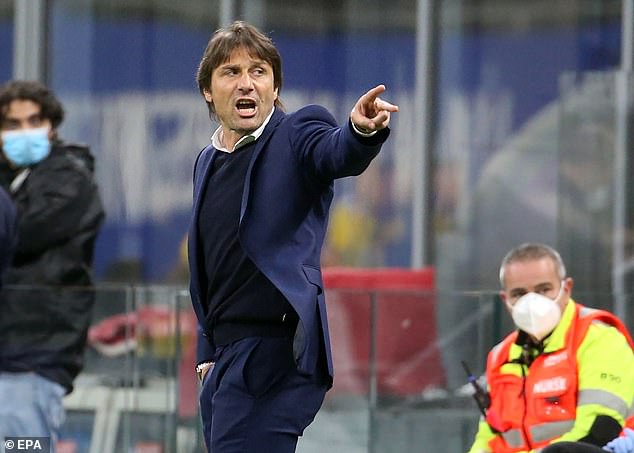 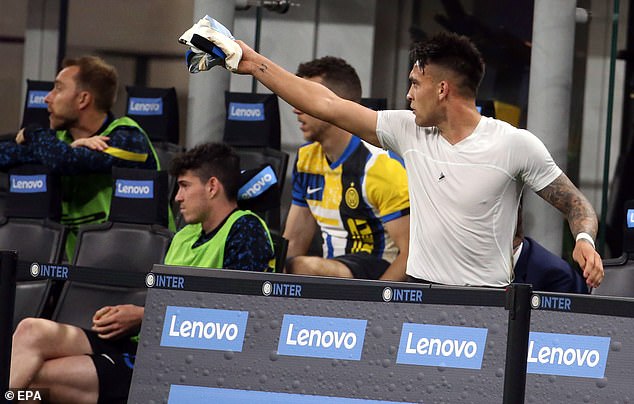 Martinez, who had entered play as a substitute, was furious with Conte and took off his shirt

Conte furiously berated the striker saying: ‘Have respect! Who are you angry with? Never react like this again.’

Martinez’s reaction was to remove his match shirt, gesticulate at his manager and throw it to the ground following another frustrating night for the 23-year-old.

They settled their feud later in the week when Inter Milan players set up a joke boxing match between the pair.

Players and staff set up a makeshift ring using cones and tape in the middle of their training pitch, with Martinez and Conte both wearing boxing gloves as they were introduced to the ‘crowd’ by Romelu Lukaku.

Inter players cheered for Martinez and then jokingly booed the Italian, before there was an amicable ending to their furious bust-up. 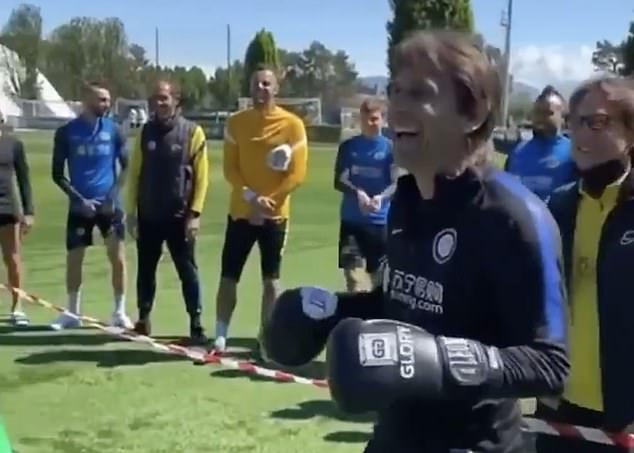