Thirteenth time lucky? For Alfredo Morelos, this chance to reshape an anguished Old Firm record is one few predicted he would receive.

Sent off on each of his last two visits to Celtic Park, the Colombian striker has endured a dozen derby appearances — nine of them starts — without scoring once.

Despite playing his part in three victories for Steven Gerrard’s side, this has so often been a fixture of torment for Morelos. 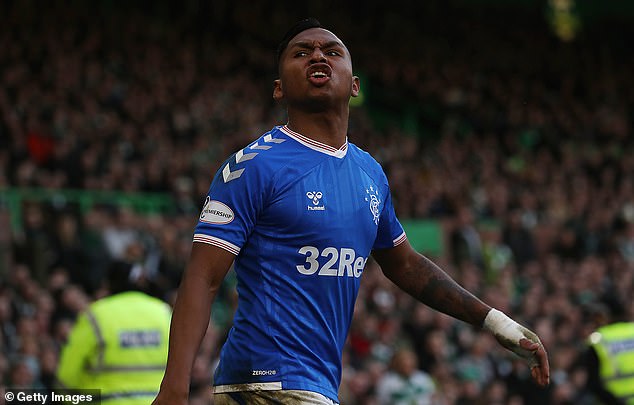 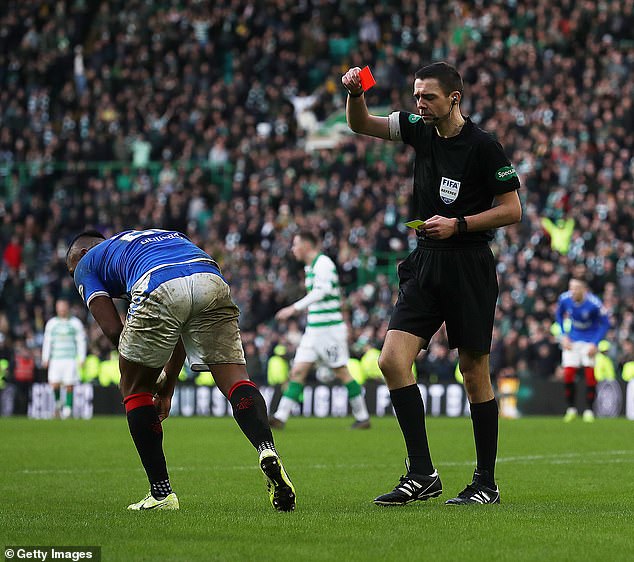 It looked as though he would exit carrying those unhappy memories of Scotland’s biggest club game.

The subject of sustained transfer interest from Lille, Morelos was widely anticipated to end a three-year stay at Ibrox before the transfer window closed earlier this month.

But the French club didn’t meet Rangers’ asking price. Nor did anyone else. And so Morelos — who returned to Scotland on Thursday after international duty with Colombia — is in line for another crack at breaking his often-raised derby duck.

Gerrard is delighted to still have him around — even if he raised the ongoing possibility of a bid from a part of the world where the window remains open. 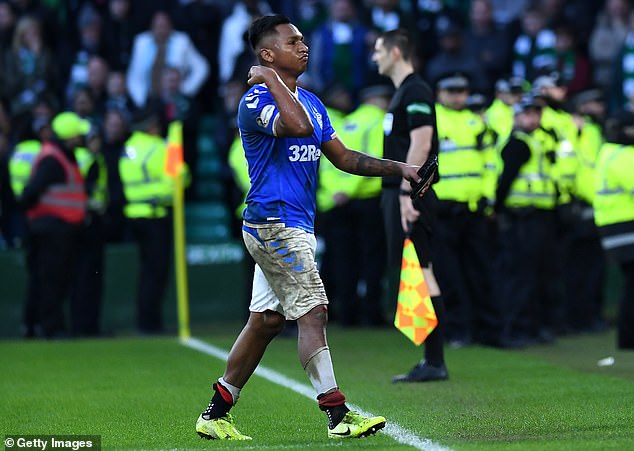 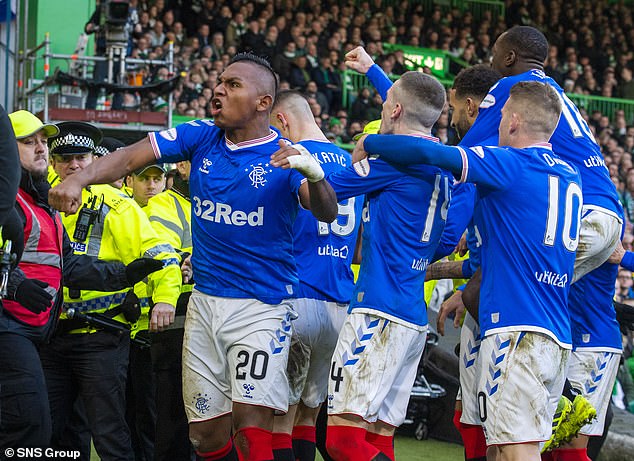 The Ibrox boss declined to confirm Morelos would start this lunchtime. Anything else would, however, come as a surprise given Kemar Roofe is unlikely to be available.

One obvious question is whether Morelos can better keep his cool at Parkhead without 59,000 opposition fans in his ears?

So far this term, the 24-year-old has picked up three yellow cards in 11 behind-closed-doors appearances.

‘In terms of Alfredo, his discipline of course has improved — but I say that with caution on the eve of an Old Firm,’ said Gerrard yesterday. ‘He needs to continue that from now to the end of the season. 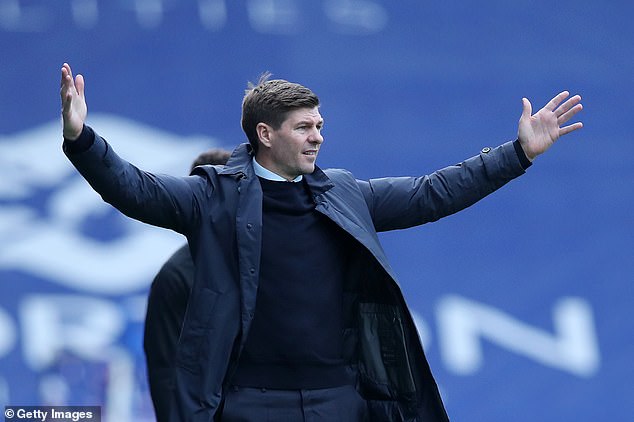 ‘He is looking fitter and sharper now. We have not seen him obviously on the pitch since the international break so we will assess him this morning, we will also have a chat with him and see how he feels and then we will decide what we want to do for tomorrow’s game.’

There is no doubt Morelos has the capacity to cause Celtic serious problems. He has dominated their defence at times, including in last December’s League Cup final when he missed a hatful of chances and saw a penalty saved by Fraser Forster.

The striker’s work in dropping deeper to link play and help release midfield runners may well be one of the keys to a positive outcome for Rangers as they look to preserve their position as Premiership leaders. 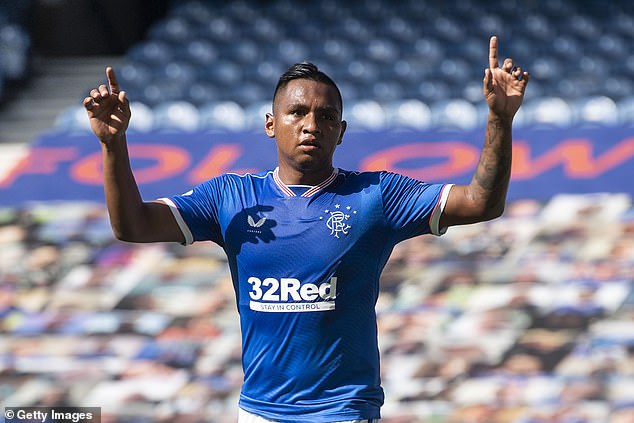 Gerrard has spoken positively of his mindset in recent weeks. That, too, seemed an unlikely prospect when Morelos was dropped back in August after having his ‘head turned’ by the transfer speculation.

‘On many occasions, it was a thing I had to manage from day to day because I didn’t know myself whether there was going to be a bid for him or whether he was going to be sold,’ admitted Gerrard.

‘He’s a fantastic player and he’s still in the door. So we will use that to our benefit. How long he is going to be here for I don’t know. 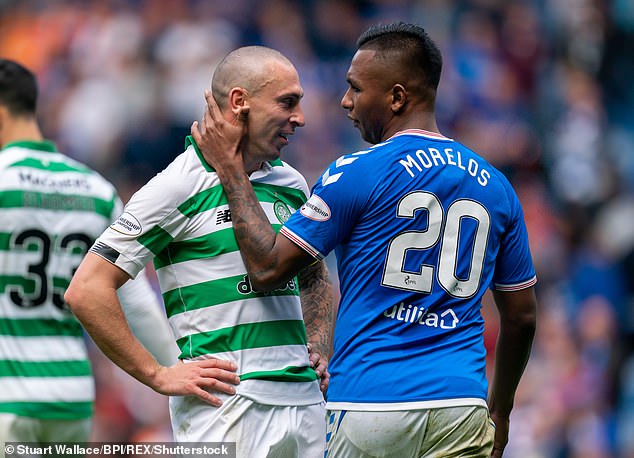 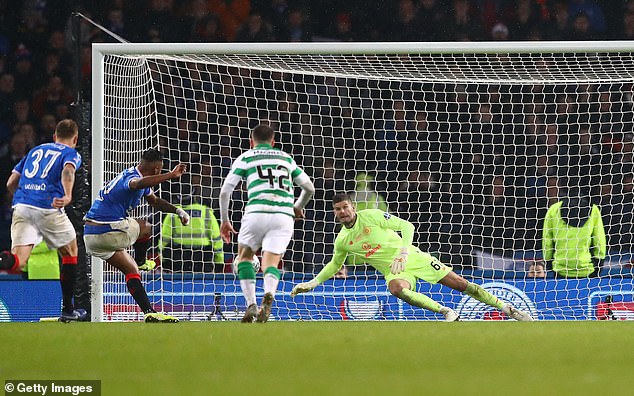 ‘There are still certain windows open so I don’t think we are totally though the woods just yet. But, from a selfish point of view, I want as many good players available to me from now till the end of the season as I can because it will give me a better chance of being successful. Selfishly, I am happy.

‘Alfredo arrived back yesterday afternoon alongside a few other internationals. It isn’t ideal, them arriving that late, but it is what it is.

‘Alfredo comes from a little bit further (having played for Colombia in Chile), so we will have a chat with him this morning and we will assess how he looks in the session.’

Morelos’ Old Firm bow saw him denied a goal after Craig Gordon blocked a header with his chest.

Gordon again denies the Colombian with a save that bounces off his knee from point-blank range.

With Rangers chasing a late equaliser, Morelos somehow hits the post from a yard out with two minutes left.

A Scottish Cup demolition saw Morelos have two chances — both were saved by Gordon.

Only named as a sub and came on for Josh Windass when Rangers were already five goals behind.

Steven Gerrard’s Old Firm bow and Morelos has one chance… which was saved yet again by Gordon.

Morelos finally celebrates a win over Celtic, but has a quiet day despite Rangers dominating.

A fifth red card of the season and the first against Celtic as Morelos is dismissed for an elbow on Scott Brown.

ermaine Defoe is preferred to Morelos and he has no time to make an impact in another win.

Sep 1, 2019: RANGERS 0 CELTIC 2 Again, Morelos was only handed a sub place and replaced by Defoe as Rangers fell to a tame defeat.

Fraser Forster not only saves Morelos’ penalty, but denies him on three other occasions as Celtic win the League Cup.

Dec 29, 2019: CELTIC 1 RANGERS 2 Morelos misses a sitter and is shown a second yellow card for diving in stoppage time before making a cut-throat gesture.