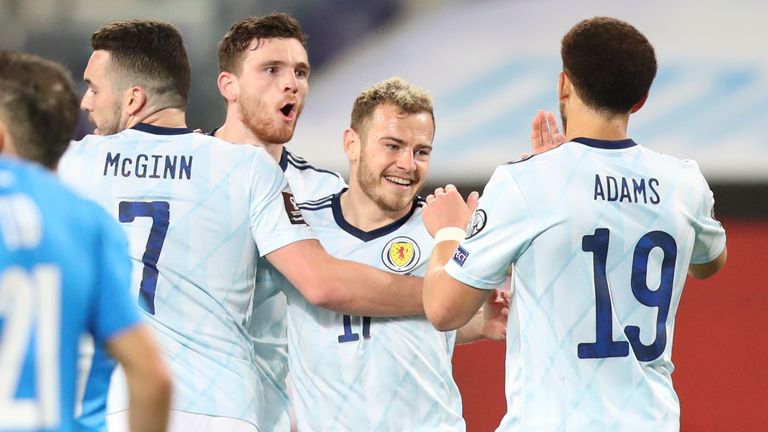 Scotland will be hoping for victory as they host the Faroe Islands, while Northern Ireland’s match against Bulgaria is already being billed as a ‘must-win’.

England will be hoping to extend their perfect start against Poland, with France, Germany and Spain also in action.

Not only that, but you can also watch in-game clips and free match highlights on Sky Sports’ digital platforms via our dedicated live blog, so there is plenty to look forward to, including these fixtures:

Group B: Spain looking to keep pressure on Sweden

Spain are hoping to keep the pressure up on Sweden at the top of Group B as they host Kosovo in Seville. Spain have taken four points from two games so far, drawing with Greece before winning 2-1 in Georgia on Sunday, while Kosovo were beaten 3-0 by Sweden in their opening Group B clash.

Luis Enrique will look to freshen up his side following two sub-par performances, while Kosovo have Bernard Berisha suspended.

In the other Group B game, Greece, who have one point from their opening game, host Georgia, who have lost both games so far.

Northern Ireland resume their World Cup qualifying campaign on Wednesday night when Bulgaria visit Windsor Park. The fixture has been billed as a ‘must-win’ game as Northern Ireland try to avoid digging themselves a hole in Group C.

Though Thursday’s opening qualifier ended in a 2-0 defeat to the Italians in Parma, there was major encouragement to be taken from the second-half performance.

The challenge now is to replicate that against a Bulgaria side who have themselves won only one of their last 10 games – a 3-0 friendly victory over Gibraltar in November – and who lost their opening qualifier 3-1 at home to Switzerland last week.

Group-toppers Italy are in Lithuania looking to strengthen their hold following two wins from two.

World Cup holders France look to strengthen their grip on Group D as they visit Bosnia and Herzegovina, who are without a win in 10 games.

France kick-started their campaign with a 2-0 win at Kazakhstan on Sunday following the 1-1 opening-game draw with Ukraine last week, while Bosnia and Herzegovina drew 2-2 with Finland in their opener.

Miralem Pjanic should become only the second Bosnian player to reach 100 caps for his country, while Anthony Martial is unlikely to make the French XI due to a knee injury.

In Group D’s other game, Ukraine host bottom side Kazakhstan.

Steve Clarke wants the positivity surrounding Scotland’s long-awaited qualification to the European Championship to bolster their bid to make it to the Qatar World Cup.

The Scots will play in their first major finals for the first time since 1998 when they face England, Croatia and the Czech Republic in the delayed 2020 Euros this summer.

However, before that Clarke’s side are looking to make inroads to qualify for the 2022 World Cup but they have work to do after starting their qualification campaign with a 2-2 home draw with Austria last week and a 1-1 draw in Israel on Sunday night.

Ahead of the home Group F game against the Faroe Islands at Hampden Park on Wednesday night, the Scotland boss welcomed any increased expectations as a “good thing” and added a reminder of recent success.

Steve Clarke hinted he could change goalkeepers for the visit of the Faroes, who drew 1-1 in Moldova before losing 3-1 away to Austria.

Regular number one David Marshall has been in fine form for his country but he came in for some criticism for his attempt to save a long-range shot from Dor Peretz a minute before half-time in Israel.

Group I: Last chance to impress for England?

England might have a perfect World Cup Qualifying record to preserve but Gareth Southgate’s focus will be firmly on the forthcoming Euros, too.

While Mason Mount has impressed during this international break, players like Kalvin Phillips, Jude Bellingham and Tyrone Mings will hope for further game-time to bolster their prospects of making the cut for this summer’s tournament in the final competitive game before the big squad announcement.

Poland might be far more than a one-man team but England’s task will surely be a little easier without Robert Lewandowski lining up at Wembley.

The all-time top scorer is out injured and Paulo Sousa is also battling with personnel problems due to coronavirus. Kamil Piatkowski has contracted Covid-19 in the latest round of testing, with Mateusz Klich and Lukasz Skorupski testing positive in recent days. Grzegorz Krychowiak initially tested positive on Tuesday but the Polish FA confirmed he undertook a second coronavirus test which came back negative. He will fly to London on a private jet to join up with the rest of the Poland squad and is be expected to start at Wembley on Wednesday.

In Group I’s other games, Andorra, without a point, host Hungary, while Albania go to San Marino.

Germany look to make it three wins from three as they host North Macedonia in Duisburg on Wednesday.

Having beaten Iceland and Romania without conceding, Joachim Low is looking to build more momentum to make up for November’s humiliating 6-0 defeat by Spain.

Timo Werner is pushing for a starting spot on Wednesday, while Jamal Musiala is also looking for a full debut.

Armenia, who also have two wins from two, host Romania, while Liechtenstein and Iceland, both without a win, face off in Vaduz.