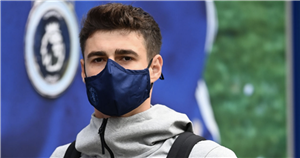 Chelsea could put several first-team players up for sale this summer as Thomas Tuchel looks to build a Premier League title challenging side for 2021/22.

The former Borussia Dortmund and PSG boss oversaw a fine run of unbeaten fixtures since being chosen to replace Frank Lampard – but that was ended in style by West Brom on Saturday.

Tuchel, who admitted that he has some ideas for his squad next season, could raise millions in funds by selling those he doesn’t have plans for in the senior side.

Daily Star Sport have now taken a look at 10 potential departures as director Marina Granovskaia will again be tasked with organising incoming and outgoing deals.

With Edouard Mendy holding onto the number one spot that was handed to him by former boss Frank Lampard, the future of Kepa Arrizabalaga remains uncertain as the summer window approaches.

As the months progress it looks more obvious that the move to sign Kepa from Athletic Bilbao might have been an error at £71m, but he could still rebuild his career abroad.

In a fresh development Antonio Rudiger is said to have been “removed” from a training session after a bust-up with the goalkeeper on Sunday morning following their defeat.

Although Emerson Palmieri grabbed a memorable goal as Chelsea put Atletico Madrid out of the Champions League last month, the club are said to be willing to sell up.

Football Italia report that both Inter and Napoli have been monitoring the progress of the left-back, who is entering the final year of his contract in London.

Despite playing in the Europa League final under Maurizio Sarri, he slipped down the pecking order under Lampard and is not a regular starter under Tuchel.

Despite his favour under both Sarri and Lampard, Jorginho could make his way back to Italy this summer as he continues to be linked with a move to Serie A.

However, his agent Joao Santos is quoted as saying this week: “He has a two-year contract with Chelsea.

"He thinks about playing the European Championship. And then the World Cup in Qatar. He will remain at Chelsea, 100%. We will talk about [a new contract] in a few months."

Although Lampard had high hopes for Christian Pulisic during their time together, Tuchel recently admitted that their time in Germany could hinder the forward’s hopes of starting regularly.

Tuchel stated that Pulisic could be utilised from the bench because of the impact he can have on tired defenders, which is unlikely to please the United States hero.

He said of the forward last month: “He proved in many weeks that he has the level to be a Chelsea regular player, to have a big impact at this club and it’s a challenge now to maintain the level and to keep improving.”

Another player who has not been starting regularly of late is Tammy Abraham, who has slipped out of favour under Lampard due to the good form of Oliver Giroud.

The England forward has also suffered from injury problems, but former Republic of Ireland forward David Connolly believes his former club West Ham could come calling, but might be unsuccessful.

In a chat with talkSPORT, he said: “West Ham would love him! They need another striker. They’re very reliant on Michail Antonio, but I can’t see Chelsea selling Tammy Abraham.”

Fikayo Tomori looks certain to leave Chelsea on a permanent deal this summer after impressing on loan at AC Milan in Serie A following a January move.

Tuchel has admitted to not having considered Tomori’s return as he focuses on those at Stamford Bridge, with Milan having an option to buy him this summer.

Although Lampard had long-term plans for the defender, that looks to have changed at the club following his departure in January.

Danny Drinkwater will have one year left on his Chelsea contract at the start of next season, having been out on loan to Burnley, Aston Villa and now Kasimpasa in recent months.

His £35m move from Leicester in 2017 looks to have been a large mistake from the club, who could even allow the player to leave on a free this summer by paying off his wages.

In a further blow to his relationship with Chelsea fans, Drinkwater incidentally posted a picture of him celebrating on Instagram following Lampard’s sacking.

Ruben Loftus-Cheek has managed only one goal and no assists since joining strugglers Fulham on loan from Chelsea at the start of the season.

The England midfielder has not been able to find his best form despite the hopes of former boss Lampard, and has a contract at Stamford Bridge until 2024.

The 25-year-old is likely to still get Premier League interest should he not be a part of Tuchel’s plans, which could see him leave in the summer.

Michy Batshuayi has struggled since joining Crystal Palace on loan this season, scoring once and making two assists across 16 appearances in the Premier League.

Although he did score for Belgium against Belarus during the international break, it is unlikely that he will return to play a key role at Chelsea next season.

With his contract running until the summer of 2022, a permanent exit could be on the cards.

Tiemoue Bakayoko will have one year left on his contract at Chelsea when his loan at Napoli comes to an end this summer, but doesn’t look to be in the plans of Tuchel.

The 26-year-old earned a move to the Premier League by helping Monaco to Ligue 1 glory in 2017, but has only made 43 appearances for the Blues in four seasons amid three loans.

It is unlikely that he will return to play a key role at Chelsea during the last year of his deal there, and could end up leaving on a permanent deal this summer.