Melbourne Rebels still have a pathway into the Super Rugby finals if they can beat the Chiefs at AAMI Park on Friday night.

The Rebels suffered a club-record 66-0 loss to the Crusaders in Christchurch on Saturday as the title favourites flexed their muscles. 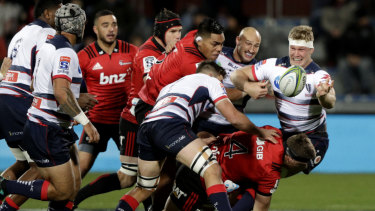 Crunched: Rebels’ Matt Philip passes off under pressure against the Crusaders.Credit:AP

Melbourne will bring back Wallabies halfback Will Genia after he was forced to rest this weekend due to Rugby Australia's rest policy while Rebels coach Dave Wessels will urge his players to move on and focus on becoming the first team in club history to make the finals.

Wallabies lock Adam Coleman injured his shoulder and was replaced in the first half so he could be in doubt for Friday night's game.

The Chiefs will come to Melbourne knowing a bonus point win would put them into the finals and a win would give them a chance depending on other results, so this contest is effectively a play-in game.

But the final round of Super Rugby will see 12 teams in the race for the top eight positions although with the top four sides safe it is effectively eight teams battling for four spots.

If Melbourne win or take a bonus-point win they will make the finals for the first time in club history.

If they happen to run up the score and bring their for and against back to positive numbers they could finish as high as fifth depending on results in the South African conference games but they would more likely finish sixth or seventh.

With the Bulls and Lions playing each other, the winner of that game would move past the Rebels while the Stormers could also jump the Rebels with a bonus-point win over the Sharks.

Australian conference winners ACT Brumbies and South African conference winners Argentina Jaguares will decide who finishes second and third by their final round results while Wellington Hurricanes can't fall out of fourth place. All three sides will host quarter-finals along with the Crusaders.

Whoever finishes eighth will face the Crusaders in Christchurch while the Rebels, if they win, would likely visit either the Brumbies or Jaguares.

There is a scenario in which the Rebels, the Chiefs, the winner of the Waratahs and Highlanders game plus South African sides the Lions and Stormers could all finish in 35 points then face tie-breakers for seventh and eight spot.

Wins and then for and against are the two tie-breakers but the Rebels could fail in both as the Lions would finish seventh due to due to already having eight wins while the Waratahs, +11, the Highlanders, +12, and Stormers, -19, are all ahead of the Rebels, -21 on for and against.

Those numbers will all change but not enough to bring the Rebels up.

The Rebels host the Chiefs at AAMI Park on Friday at 7.45pm.

The finals equation for Melbourne Rebels

Thomas Partey: Is Atletico Madrid midfielder on the verge of Premier League move?