The Rugby World Cup Pool B match between Namibia and Canada which was scheduled to be contested later on Sunday in Kamaishi has been cancelled because of the destruction caused by Typhoon Hagibis, World Rugby said. 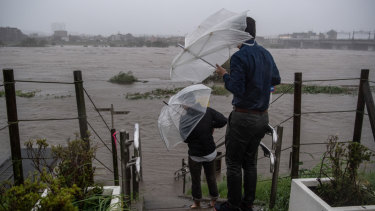 The organising committee's CEO Akira Shimazu added: “We considered every possibility to make this game happen, in the end we had no option but to cancel the match to ensure the safety of the fans, team, volunteers, and all others involved.

"It was both a difficult and emotional decision to make, however, I feel it’s the right decision."

Typhoon Hagibis, one of the most powerful tropical cyclones to ever hit central Japan, left millions confined indoors and streets deserted as record rains and fierce winds flooded rivers and threatened widespread damage.

The Namibia-Canada match, which had no bearing on the rest of the tournament with both sides out of contention for the quarter-finals, will be recorded as a draw. It is only the third World Cup match to have been cancelled.

Two of Saturday's matches, the Pool C decider between England and France and the Pool B match between world champions New Zealand and Italy, were scratched on Thursday when it became clear the typhoon would make landfall in central Honshu.

Organisers expect the Pool C match between the United States and Tonga (in Hanazono), Wales's final Pool D match against Uruguay (in Kumamoto) and host nation Japan's Pool A clash with Scotland (in Yokohama) – which will decide which of the two teams reaches the quarter-finals – to go ahead on Sunday as planned.

“We remain optimistic that Sunday’s remaining matches will go ahead as scheduled in Kumamoto, Hanazono and Yokohama, which are much further south and therefore outside of the impact of the storm conditions this morning," the statement added.

"Detailed venue inspections at Hanazono and Yokohama are currently underway, and an update will be published when that important process has been completed."

Ticket holders to the Namibia v Canada match will be entitled to a full face-value refund.

If Scotland were trying to shut out the enormous distraction of the typhoon, focusing instead on the assumption that they would indeed be playing Japan, it was proving near impossible.

Adams is looking in Wales' Six Nations showdown with France