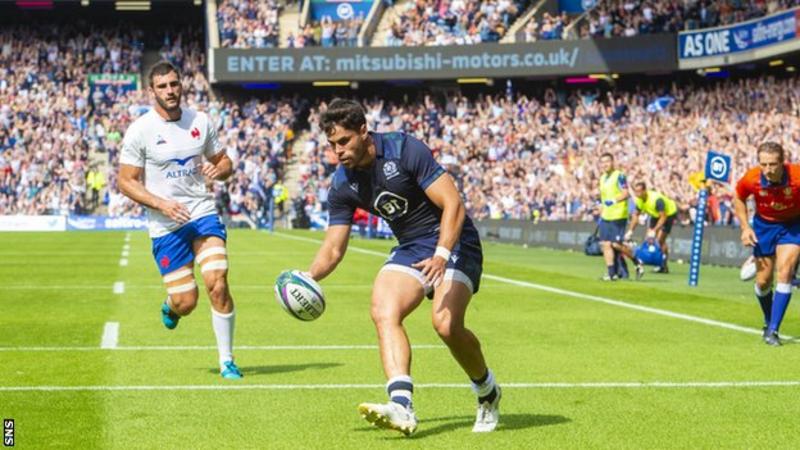 A week on from a 32-3 collapse, the Scots’ horror start at the Allianz Riviera was repeated as Damian Penaud went over within the first two minutes before later adding a second try.

Sean Maitland’s score just before the break jolted the crowd into life to build on Greig Laidlaw’s early penalty.

Chris Harris crashed over the line with 20 minutes to play to clinch victory.

While far from a perfect display, this was an improved showing from Gregor Townsend’s men, particularly in the second half.

A negative from the afternoon for the Scotland head coach came in the form of Tommy Seymour, Blade Thomson and Sam Skinner being forced off.

The Scots now face a double header with Georgia, starting in Tbilisi next week, before heading to Japan where they open against Ireland on 22 September.

After the awful performance in Nice last Saturday, Scotland desperately needed a performance to restore confidence. In recent times they have made awful beginnings in these games, conceding early and being forced to play catch-up. Scotland’s slow starts became a feature of the week and it will continue to be a talking point after they yet again conceded in the opening seconds.

For the third Test in a row they shipped a try inside two minutes, a condition that needs curing and quickly. It was hopelessly soft and entirely self-inflicted. In their haste to get the ball wide and play with a frenzied pace, Pete Horne threw an ill-advised pass under pressure.

Intended for Stuart Hogg it was picked off by Penaud. After scoring twice in Nice, the right winger had an easy job of running in again. Camille Lopez had a shocker with the boot last week. The job of adding the extras fell to Thomas Ramos and the full-back made it 7-0 before everyone had properly settled in their seat.

Laidlaw’s penalty narrowed the gap soon after. What was better from Scotland was their aggression in the tackle and their organisation in defence. They trailed, but they didn’t lack intent. Making his debut, Thomson never had a chance to show his stuff with ball in hand but his work off the ball was impressive. He emptied Gregory Lambey in midfield at one point. That howitzer was one of the differences from last week.

Another difference – when France get a five-metre line-out they usually score. They take the ball, drive it forward, skittle the Scottish forwards and touch it down. That was the case in the Six Nations and it was the case in Nice. Midway through the opening half they had a chance to do it again, but this time they were repelled. Baby steps, perhaps. But progress for sure.

And then, more of the same weaknesses. One step up, two steps back. Finn Russell, who was a constant source of invention, made an error, dropping the ball and giving France the opportunity to counter, which they did, devastatingly. Sofiane Guitoune spotted the space and sped into it before finding Penaud outside. The wing sprinted over for another score, once again converted by Ramos.

At 14-3 down, Scotland were in a hole again. Bad enough that they were monstered in France, the thought of an even worse defeat now reared its head. Murrayfield was quiet. There was a moment when they might have found their voice but Scotland butchered a lineout on France’s 22. The butchering of lineouts in good positions became a theme of the day for the home team.

With a minute to go, the Test started to turn. Penaud spilled ball and Scotland’s Blair Kinghorn – an early replacement for Seymour – picked up and sent Harris to the line. France scrambled and looked to have scrambled well, but Russell’s gorgeous floated pass over two defenders and into Maitland’s grateful mitts did the job. Laidlaw converted; 14-10.

Thomson had to retire early in the new half. A shame. Everybody wanted to see more of him. Scotland might have taken the lead had Kinghorn made his pass to Stuart Hogg, but it went to ground. With France subdued and offering little, Scotland hit the front when countering off a spillage from Camille Chat.

Kinghorn’s chase took play from one end to the other. France knocked on from the line-out. From the scrum Harris came in on the crash ball and thundered over. Harris was impressive. He was a borderline pick before this. He advanced his cause here.

The conversion was good from Laidlaw and from 14-3 behind Scotland were now 17-14 ahead. It was a lead they really only ever looked like adding to. Hamish Watson was terrific. Ryan Wilson came on to a big game. Russell showed for the millionth time how truly indispensable he is.

They wasted another couple of moments before the end and, worryingly, lost Skinner through injury after an hour. Townsend will be praying for good news on that front, but the sight of the big lock being carried off was encouraging. A bit of a low point on a day when Scotland experienced the high of victory again.

CHRIS FOY: Thorley must be wondering what he's doing wrong