Matt Hankin, 27, alleges he suffered a career-ending concussion when he was hit in the head by teammate Richard Barrington in a Budapest bar in 2015.

The former player, who retired at the age of 25, spent years in recovery from head injuries and has now brought a lawsuit against Barrington and Ademola Adejuwon, the team’s former doctor.

The Premiership club is fighting the lawsuit, which is its latest legal battle after the club was relegated and fined a record £5.36 million last year following salary cap breaches. The Sun reports that In papers lodged at the High Court in London last Friday, it is said Barrington ‘… caused injury to the claimant by striking him on the head whilst he was wearing a metal helmet with a fire extinguisher’.

In the documents seen by The Sun, Hankin also alleges ex-Sarries physio Nicholas Court failed to properly assess his injury when the team returned to London.

And he claims former club doctor Ademola Adejuwon was ‘negligent’ in allowing him to play rugby three weeks later, when he allegedly suffered further injury.

Barrington and Adejuwon also have lawsuits filed against them as part of the case.

The papers added: ‘He (Hankin) has not returned to play rugby since 3 October 2015 when his employment with the Appellant came to an end in June 2018, when his contract came to an end.’

Hankin now works at Haileybury boarding school in Hertfordshire where he is assistant director of rugby. 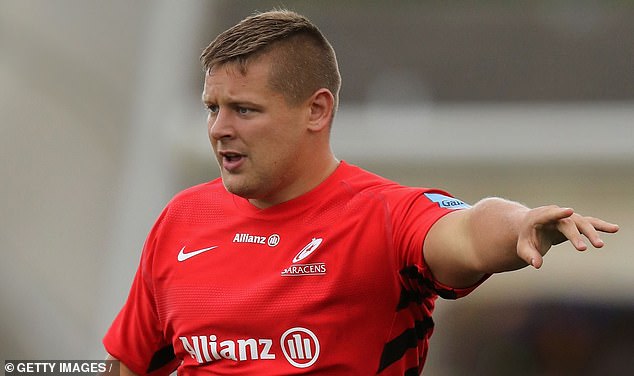 Hankin, 27, alleges he suffered a career-ending concussion when he was hit in the head by teammate Richard Barrington in a Budapest bar in 2015

Meanwhile, prop Barrington has been an integral part of the club’s Premiership and European success.

Hankin said his injury made him feel anxious, isolated and like a prisoner in his own home in the first few months of his injury.

‘A few times I just sat in my flat; I couldn’t watch telly, I couldn’t go out. Seeing everyone make these achievements and excel in rugby and playing so well, I felt I had so much more to achieve.’

A Saracens spokesman told The Sun: ‘Mr Hankin is pursuing a claim against a former team-mate, his doctor and Saracens.

‘Liability is denied and it would not be appropriate for the club to comment further in view of the ongoing court proceedings.’