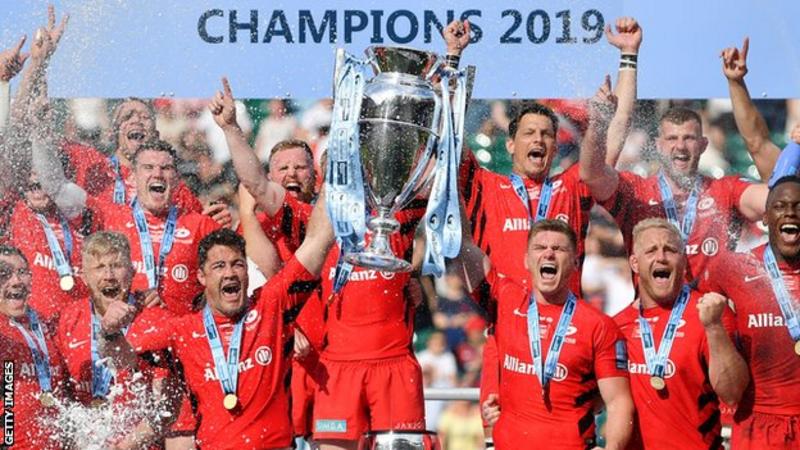 Saracens have been urged to be more transparent with fans over how they came to be relegated to the Championship, says Premiership Rugby chief executive Darren Childs.

Childs said the club needed to “take ownership” of the process that led to their unprecedented punishment for not complying with the salary cap.

This latest sanction comes just over two months after they were given a 35-point penalty and £5.36m fine for non-compliance with the £7m cap in each of the last three seasons.

Childs said Saracens “have got a number of questions to answer to their fans” and, speaking to BBC Sport, he also confirmed Saracens opted to be relegated to the Championship instead of allowing a mid-season forensic audit.

Childs, who has been in the role since September, dismissed recent criticism of Premiership Rugby’s handling of the matter, saying it was “a little unfair” and that other sports leagues around the world had complimented them on their decisive action.

The current salary cap regulations do not include a provision to automatically relegate a club, leading to confusion among fans over how that eventuality came about.

On the calls for improved transparency surrounding the initial judgement from November – which has not been published – and this recent decision, Childs told BBC Sport: “I think that is an important request. I think Saracens need to do some of that as well, quite frankly. They accepted the decision and they need to communicate with their fans.

“They are the ones that have the transactional relationship with them in terms of ticket sales and other bits and pieces. I can fully understand why there are levels of disappointment from that, and rightfully so.

“Let’s not shy away from the fact that these guys got nailed for cheating for three years and they couldn’t prove that they weren’t doing it again this year. So they have got a number of questions to answer to their fans.

“We will help them and work with them in order to do that but they have got to take ownership of some of that.”

It is understood that if Saracens gave their approval for the judgement to be made public, he would revisit the matter.

Childs said the decision on Saracens’ relegation came as a result of “exceptional circumstances”, which were an accumulation of their repeated breaches, their lack of contrition towards other clubs and their response to the judgement.

“We have been in intensive conversations with them since November,” he said.

“The outcome of that was that they were unable to provide necessary confidence of compliance for the current season.

“In addition, we were trying to get the club to cooperate with a mid-season forensic audit to put this issue to bed once and for all, and we couldn’t get their cooperation.

“All those pieces were moving in tandem and that left us in this exceptional circumstance where the longer it went on, it actually became inevitable that relegation was pretty much the only consequence, the only outcome that we could actually work with.”

He added that Saracens, who return to Premiership action at Harlequins on Sunday, were first presented with the option of relegation “between Christmas and new year”.