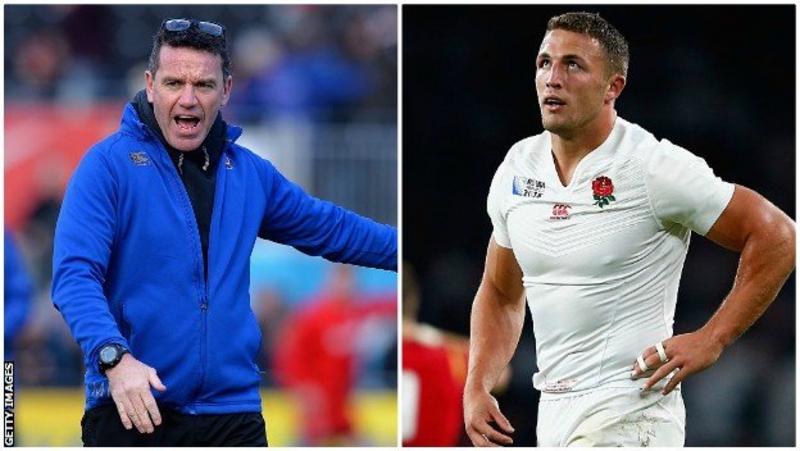 Sam Burgess has called his then-Bath coach Mike Ford “a snake” and accused him of using Burgess as a “pawn” to play politics during England’s dire 2015 Rugby World Cup campaign.

“I had to tell him I couldn’t play for him anymore. I’d lost respect for him.”

Burgess, who returned to rugby league following the World Cup after just one season in union, claims Ford stoked controversy around his selection by discussing the issue in the media despite Burgess’ requests not to.

“I just felt that people behind the scenes were playing a deeper game,” explained Burgess.

He also said that the presence of Ford’s son George in the squad became problematic.

Ford was selected at fly-half for England’s opening win against Fiji, but was only on the bench for their second match against Wales, with Burgess brought into midfield and Owen Farrell preferred at 10.

“With George, Mike kind of infiltrated the camp – that is my take on it,” added Burgess.

“After me starting against Wales, my relationship with George completely changed, he wouldn’t talk to me, he was a bit sulky.

“Knowing what I know now, I see the politics. George came on with 10 minutes to go to keep Mike and George happy. We didn’t need him on, we had the team to finish the game.”

A subsequent 33-13 defeat by Australia, which neither Burgess nor Ford started, ensured the hosts would not progress beyond the pool stages.

Burgess returned to Australian rugby league side South Sydney Rabbitohs in the aftermath of the tournament, after just one year of a three-year deal with Bath.

“I went back to Bath and I couldn’t sit in the same room as Mike. It was pretty hot to be honest,” said Burgess.

“I went straight into his office and said ‘Mike I don’t trust you, I think you have been playing games behind my back, you have used me as a bit of a pawn in your game of chess, I can’t put my boots on and play for you every week’.

“I will never forget his face when I said, ‘I can’t respect you, I think you are a bit of a snake.’ I remember the quiver that I got from him.”

Both Mike and George Ford, who played for Bath at the time, were critical of Burgess’ decision to leave, with Mike saying he lacked “the stomach” to fight for his future in rugby union.

Ford, who was England’s defence coach at the 2007 and 2011 Rugby World Cups, had initially been one of the favourites to replace Lancaster after the World Cup, before Australian Eddie Jones was appointed instead.

Burgess retired from rugby league in October, and is working as a pundit in the Australian media and as part of the backroom staff at the Rabbitohs.

BBC Sport has contacted Leicester – where Mike and George Ford coach and play respectively – for comment.