Five Waratahs players including Will Harrison, James Ramm and Angus Bell have been named in their first official Wallabies squad but coach Dave Rennie could find no room for last year’s World Cup representatives Isi Naisarani, Jack Dempsey or Tevita Kuridrani in a 44-man group announced on Sunday afternoon.

A total of 16 uncapped players have earned selection in a larger than normal Wallabies squad and the big bolter of the group is Brumbies centre Len Ikitau. 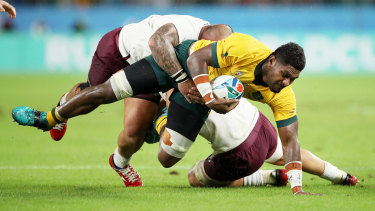 In what is the first glimpse of Wallabies life under Rennie, the Kiwi coach has assembled a larger squad of players that could still include two overseas-based players as part of changes to the Giteau Law announced earlier this week.

The Brumbies boast the biggest representation with 13 players, ahead of the NSW Waratahs (11), Queensland (11) and Melbourne Rebels (9). No Western Force players were named following their side's winless Super Rugby AU campaign.

The major shocks are that of Naisarani and Dempsey, with Rennie clearly wanting to go in a different direction by naming Lachie Swinton, Harry Wilson and Fraser McReight in their first Wallabies squads.

As for Kuridrani, the 29-year-old’s Test career could be up in smoke after missing out on a wider group that will travel together for eight Tests this year in New Zealand and then Australia.

There was no room for prop Tom Robertson nor centre Karmichael Hunt.

Meanwhile, Queensland Reds hooker Brandon Paenga-Amosa and centre Hunter Paisami have forced their way into the group after missing out on last month’s players of national interest squad.

Promising fullback Jock Campbell was overlooked but the Reds, who qualified for the Super Rugby AU final on Saturday evening with a 25-13 win over the Melbourne Rebels, will be thrilled to have newcomers Filipo Daugunu and Tate McDermott included.

The average age of the squad is 24, while those selected have played an average of 17 Tests.

In a statement, Rennie said: “We’ve picked this squad on form and on potential and I know the whole group are chomping at the bit to get stuck in and push their case for a Wallaby jersey.

“There’s a big game to come on Saturday night down in Canberra but personally, I’m really looking forward to getting out on the grass in a week’s time to start putting in the work together.

“When we picked the squad, we had to consider how we will handle the rigours of the Test calendar ahead. It is obviously a big squad which is due to COVID restrictions as we can’t bring players in and out but each of one them is there on merit.”

The Wallabies squad will assemble next Monday after the Super Rugby AU final before departing for New Zealand where they will face the All Blacks in two Bledisloe Cup matches, likely to be on October 17 and 24.

They will then return to Australia for a six-week Rugby Championship against the Kiwis, South Africa and Argentina set to begin on November 7.