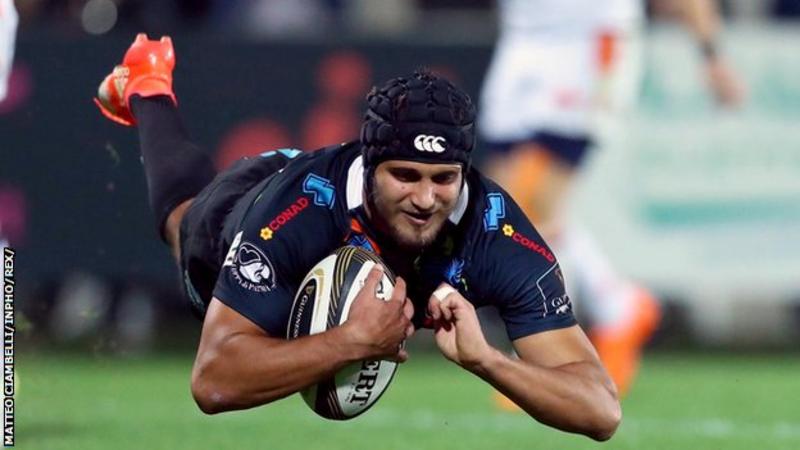 In a game lacking in quality, the Scottish side established a healthy advantage through the boot of Simon Hickey and a Darcy Graham try.

But all their hard work was undone by basic errors in the second half, as the resurgent Italians ran in four tries.

Edinburgh have now lost four of their seven Pro14 matches.

A missed tackle allowed David Sisi to run in for a score unopposed within minutes of the restart.

And then a moment of madness from Dougie Fife when dealing with a kick allowed Gabriele Di Giulio a similarly easy run in. With just eight minutes left, Hickey’s flat pass was well read by Carlo Canna, who sprinted through to give the Italians yet another simple score and the victory.

Zebre were not done yet either, as further pressure allowed captain Tommaso Castello to barge over the wrap up the bonus point.

Back down to earth for Edinburgh

After the high of their towering performance last weekend in the Champions Cup thrashing of Toulon, it was back down to earth with the heaviest of bumps for Edinburgh.

A wet and windy Friday night in front of a sparse crowd in Parma represented a significant comedown in any case, but the error strewn collapse they produced only worsened the experience.

It had started oh so brightly too. After Hickey had put Edinburgh in front with a penalty, the visitors, missing nine Scotland internationals rested ahead of the autumn internationals, were well on top, Viliame Mata and the returning Pierre Schoemann so often at the heart of it as they battered the Zebre defensive line.

Chris Dean scored the all-important fourth try to secure a bonus point against Toulon and the centre was the man to eventually open up the Zebre defence.

Playing with front-foot ball in the home 22, Hickey fed Dean who cleverly checked his run, stepped inside his opposite man and offloaded out the tackle to find Darcy Graham arriving on the loop to score.

Hickey, as he so often does, added the extras and a further penalty as errors punctuated the remainder of the half, Canna eventually getting Zebre on the board on half-time with a penalty of his own, leaving it a 10-point game at the break.

But it was all rapidly downhill from there as Edinburgh became embroiled in a mess entirely of their own making.

Edinburgh count the cost of errors

Holding a similar lead at the break in their last Pro14 fixture against the Cheetahs, their carelessness allowed the South African side back into the match, and so it was the case here.

First, Mata spilled the kick-off, and after a few phases lock Sisi picked and spun away from Callum Hunter-Hill to gallop over for the try, Canna converting. It was eye-wateringly easy for the Italians, in what was their only real spell in Edinburgh’s 22.

If that was brutal viewing for Richard Cockerill though, Edinburgh’s head coach would scarcely believe what was to come.

After Hickey and Canna had traded penalties, Canna put an innocuous kick into the Edinburgh half, which Fife inexplicably allowed to bounce, the ball looping over his head and into the welcoming arms of winger Di Giulio to waltz over and secure an easy seven points for the hosts, putting them within three.

Despite Zebre having made almost twice as many tackles by the hour mark, it was they who seemed to find the energy to pile on the pressure, while the penalties and the errors mounted for Edinburgh, keeping them pinned in their own half.

As they grew increasingly desperate, Hickey took the ball to the line just inside his own half and whipped a pass wide, but it was well read by Canna who intercepted and scored under the posts.

And as just rewards for their tenacity, Zebre’s captain Castello rumbled over in the dying moments to give them the bonus point, and leave Cockerill wondering what might lie ahead as they begin a month without key internationals with a bruising defeat.