The Wallabies were well beaten by the All Blacks on Sunday.

They fell 27-7 – their 20th straight loss to the Kiwis at Eden Park – and now face the tough task of having to beat their fierce rivals twice in the space of seven days to secure the Bledisloe Cup for the first time since 2002 when the series heads to Australia with fixtures in Sydney on October 31 and at Brisbane's Suncorp Stadium seven days later. 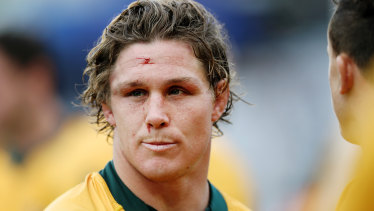 Rennie raised more than a few eyebrows when he named the maligned Waratahs forward for his first Test start since 2018. But the selection proved to be a good call. Hanigan made 13 tackles, missed just one and made the break which set up Marika Koroibete's try. While Hanigan did plenty of good work, he is still prone to the occasional soft penalty. He gave away two in the space of five minutes at one point, which gifted the All Blacks prime field position, before redeeming himself by winning a penalty at the defensive breakdown. That passage of play summed Hanigan's career up.

Another Test, another workhorse performance from the Wallabies captain. Hooper provided a link in attack and made 14 tackles but his downfall on Sunday afternoon was his tackle completion percentage. The skipper uncharacteristically missed five tackles.

While that missed tackle count is far too high for a player who is typically a defensive beast, his breakdown presence impressed. Hooper pinched a pair of turnovers – one at a critical juncture early in the match.

Wilson overcame a bout of gastro to line up on Sunday but the illness may have taken its toll. Wilson wasn't at his metre-eating best but did rock Beauden Barrett twice with perfectly timed tackles.

White was one of the Wallabies’ best in the 16-all draw seven days ago, prompting former All Blacks coach Steve Hansen to predict he would be given more attention at Eden Park. The World Cup-winning coach hit the nail on the head. Every halfback relies on their forward pack generating go-forward and White was starved of both momentum and clean ball on Sunday. That did not allow him to snipe around the fringe of the breakdown like he did in Wellington. White also missed five of his 11 attempted tackles. That's not good enough at Test level.

O'Connor controlled the first Test in Wellington. He did nothing of the sort on Sunday. The five-eighth struggled when Matt To'omua came from the field with five to play in the first half. He appeared to panic on a couple of occasions and overplayed his hand, which resulted in errors. O'Connor also missed a simple tackle – one of four total – on Jack Goodhue, which led to Aaron Smith's try.

Koroibete took the first opportunity he was afforded to give the Wallabies hope at half-time. But he bungled a golden opportunity to score a double when he was held up over the line by Richie Mo'unga and Anton Lienert-Brown. When the Kiwis then made their way into the Wallabies' 22, Koroibete was the man who shot out of the line and allowed the break which put Sam Cane in for the sealer. The flying Fijian also conceded three total turnovers, including a pair of bad drops. 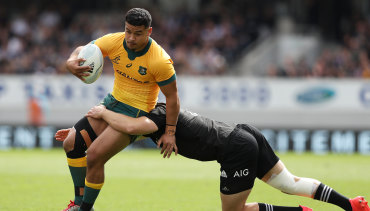 Daugunu was arguably man of the match seven days ago. The flying Fijian was not afforded anywhere near as much space with the ball and while his return with ball in hand was probably a pass mark (68 metres, two line breaks, three tackle busts, two offloads from 11 carries) he did not have the same impact. Daugunu also missed three of his six total tackle attempts.

Banks will be one player under the microscope for the third Bledisloe. The Brumbies star has not been able to translate his running game to the Test arena. That was made very clear on Sunday, as the All Blacks had no difficulty stopping him every time he tried to launch a counter-attack. His kicking game is valuable but Rennie may look to Dane Haylett-Petty at ANZ Stadium. 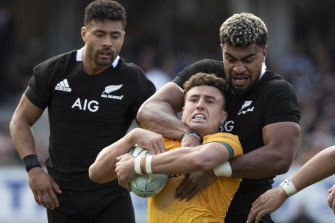 Tom Banks had an average afternoon for the Wallabies.Credit:AP

Uelese played the final 30 minutes and made an impact with ball in hand, making 29 metres from his four carries. The scrum held its own while he was on the field and the lineout didn't falter, either.

Sio replaced Slipper and played the final 27 minutes. He put his hand up for a handful of carries and did a serviceable job at scrum time.

Alaalatoa entered the fray after half-time and while he will never bring the same explosive physicality of Taniela Tupou, did exactly what was required of him at the set-piece. He was one of few Wallabies with no missed tackles, completing all six of his attempts.

Simmons played 27 minutes but didn't offer a great deal of impact with ball in hand.

Wright's third Test was not one to remember.

He coughed the ball up twice in 30 minutes – including a strip at the hands of replacement halfback TJ Perenara – but did win an impressive penalty at the breakdown in the final 10 minutes when the Wallabies were defending their line.

Gordon kept his head as the Wallabies scrambled for points in the second half. His passes were clean and he put the perfect weight on a box kick which rolled out deep inside the All Blacks' 22 when there was little else on.

Petaia must start the third Bledisloe at outside centre. He replaced To'omua late in the second half and was the only Australian to look a serious threat with ball in hand in the second half. He beat four defenders in his seven carries and, while he did produce the error which eventually led to Sam Cane's try, he does far more good than bad.

Hodge only played the final 15 minutes. That wasn't enough to make a call on either way.