Evans was sent off by referee Frank Murphy after just 37 seconds at the Liberty Stadium when his boot made contact with Racing wing Teddy Thomas’ head as he claimed a high ball.

European title contenders Racing – beaten finalists in 2016 and 2018 – did not require a second invitation to capitalise as Thomas’ try double, a penalty try and touchdown for hooker Teddy Baubigny secured a bonus point before half-time.

Racing’s victory keeps them firmly on course for the quarter-finals in a punishing group that also includes Champions Cup holders Saracens and twice European champions Munster.

The Ospreys, with just one win from nine starts in all competitions this season, played their first game since head coach Allen Clarke was relieved of his duties.

The Ospreys included Wales World Cup squad members Watkin, Davies, Nicky Smith and Adam Beard, yet star-studded Racing had an imposing look about them and started as firm favourites. 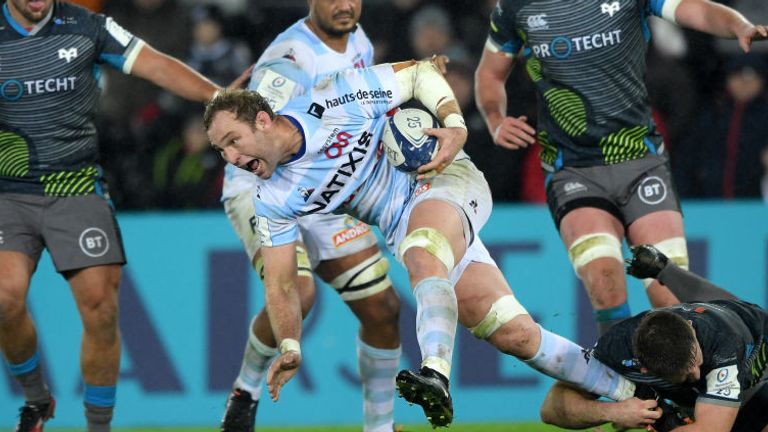 And Racing immediately gained a one-man advantage as Evans was dismissed, with Murphy brandishing a red card after consulting television replays.

A yellow card quickly followed for Racing wing Juan Imhoff following a deliberate knock-on, and Ospreys struck from their next attack as Dirksen touched down and McKenzie kicked a touchline conversion.

The Ospreys then suffered an injury blow when Watkin departed after 17 minutes, before Williams was sin-binned for a technical infringement and Racing punished their 13-man opponents by driving a lineout and Baubigny touched down.

Machenaud converted to level the contest, ending a breathless opening quarter when the Ospreys gave as good as they got in adversity.

But the tide quickly turned, with Thomas scoring a try in the corner and Machenaud converting, before Ospreys were briefly reduced to 12 men, with Murphy yellow-carding Davies for a deliberate knock-on and awarding Racing a penalty try.

Williams returned, but only in time to see Thomas claim his second touchdown that Machenaud converted, meaning that Racing had claimed four tries in 11 minutes and secured a bonus point.

Unprecedented transfer window, wide-open title race and the search for Eddie Jones’s successor: the Premiership returns with plenty on the line