Prime Minister Scott Morrison, who once tweeted that “rugby will always be my game”, has light-heartedly put the heat on new Wallabies coach Dave Rennie before his first game in charge.

“No pressure mate, just don’t stuff it up,” Mr Morrison said. “Seriously, Dave’s new leadership tonight marks what I think is a new start for a new era of the Wallabies. An era that will be defined as much by the culture of that team that is created both on the field and off the field.”

In a special video sent to the Wallabies before Sunday’s Bledisloe Cup opener in Wellington, Mr Morrison wished the team luck and revealed he was in Dunedin when Australia last beat the All Blacks in New Zealand in 2001.

“You know it’s been a long time since we won in New Zealand. I was actually there when that happened,” Mr Morrison said. “Who can forget John Eales’ last-minute penalty in Wellington in 2000? Or Matt Burke’s heroics at Dunedin the following year? These moments are part of Australia’s rugby folklore. 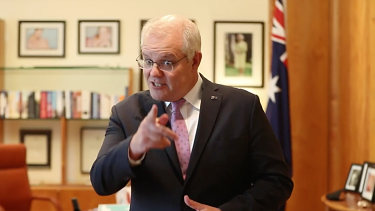 Mr Morrison, who many believe is a rugby league man, has a very soft spot for the 15-man game.

He tweeted in 2012 that “rugby will always be my game”, and a few years earlier confirmed on social media that while he was more of a rugby fan, “naturally when it comes to the NRL, the Sharks have my loyalty”.

The Wallabies take on the All Blacks today at 2pm (AEDT) in the first of four Bledisloe Cup matches between the sides in 2020.