A new-look Waratahs side likely to feature Mack Mason at No.10, Alex Newsome at fullback and Jack Dempsey in the back row is primed to run out against a Highlanders outfit also playing for its season this Friday.

The Waratahs won’t name their starting XV until Wednesday when they depart for Invercargill for their final regular match of the season but won’t have Wallabies representatives Michael Hooper, Sekope Kepu, Rob Simmons, Bernard Foley or Kurtley Beale in their run-on side. 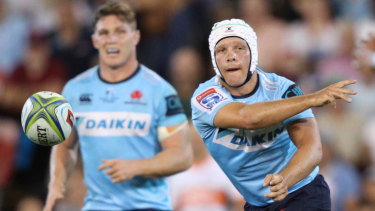 Mack Mason is set to wear the No.10 jersey for the Waratahs this Friday against the Highlanders. Credit:AAP

Mason is firming as Foley’s replacement at five-eighth in what will be his first outing since a poor performance during the Waratahs’ shock two-point loss to the Sunwolves in March.

"Hopefully he gets out there," said Waratahs winger Cam Clark, who is also set to return to the starters. "He's a great player and he's been playing great footy for Easts as well in the Shute Shield. He's match fit and ready to go, so I'm sure he'll be able to step up.

"You train a lot throughout the year on the training paddock and if you don’t get a lot of minutes it can be frustrating at times."

Meanwhile, the Waratahs are leaning towards shifting Newsome from the wing to fullback in what would be the first time he has ever worn the No.15 jersey at Super Rugby level.

Lalakai Foketi and Adam-Ashley-Cooper will link up once again in the midfield, while Nick Phipps is set to retain his spot at halfback for his final Waratahs match before heading offshore next season.

"There are guys out there who are really keen to show what they can do and prove something over there in a tough place to win," Clark said. "Every game you go out to put in a positive performance and the way things have gone this year with a few tight losses, it’s definitely something we want to leave behind for next year to build on."

With no Kepu, the Waratahs will have to make a call as to whether Harry Johnson-Holmes or Tom Robertson moves to tight-head prop. The latter began his Super Rugby career at tight-head and has said recently he would be happy to make the shift if required.

Ned Hanigan will return to the starters after missing the Brumbies game with a concussion and is likely to partner Tom Staniforth.

The back-row also becomes a tricky proposition given Hooper’s absence.

Dempsey trained well on Tuesday and is understood to very much be in the selection frame after a back injury that has prevented him from playing since round 11 against the Sharks.

Will Miller, Hugh Sinclair and Michael Wells will have to squeeze into the other two back row positions.

The Highlanders have pledged to name a full-strength side and will welcome back All Black Ben Smith who is "raring to go".

For the Waratahs – sitting 12th on the ladder – to make the top eight they need to beat the Highlanders with a bonus point and hope the Chiefs defeat the Melbourne Rebels without claiming a bonus point.

A bonus point win for the Highlanders could also see them snare a finals berth.

"They have a lot of flair, a lot of variety in their attack and some great players," said Clark of the Highlanders. "You’ve got to be pretty on to win against them. They’ve got a lot to prove as well going into this last game. It’ll be a tough one. Hopefully we can have another good performance."

Thomas Partey: Is Atletico Madrid midfielder on the verge of Premier League move?