Jonny May led the way with two tries as Leicester Tigers crushed Calvisano 59-7 in the European Challenge Cup on Saturday.

The Pool 5 match at Welford Road saw the Tigers blitz the visitors with four tries inside the opening 16 minutes from Manu Tuilagi, May and Sam Lewis, with George Ford landing three conversions for a 26-0 lead.

Although the visitors reduced the deficit before the break to 19 points via a converted try from Lorenzo Cittadini, second-half tries from Tom Reffell, Adam Thompstone, Jake Kerr, Noel Reid and Telusa Veainu added an emphatic touch to the scoreline to make it three wins from three.

Bristol Bears also maintained their 100 per cent unbeaten record in Pool 4 with a superb 37-11 triumph over Stade Francais at Ashton Gate.

Although Lester Etien gave the visitors the lead with the game’s first try, Bristol went into the break with a 13-8 advantage courtesy of two Ian Madigan penalties either side of a Luke Morahan try.

A penalty apiece early in the second half ensured the tie was still close going into the final 20 minutes before Bristol ran away with the game with converted tries from Harry Thacker, Charles Piutau and Toby Fricker to secure a bonus-point win. 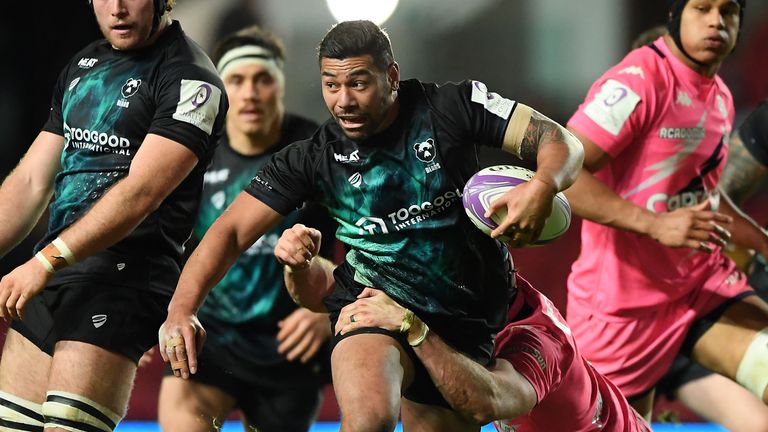 In the same pool, Italian side Zebre secured their first win of the tournament with a tight 27-24 victory over Brive.

In Pool 1, Worcester Warriors secured a bonus point with a pulsating 34-28 win over the Dragons at Sixways Stadium to end the visitors’ unbeaten start.

After a Aaron Wainwright try gave Dragons an early 7-3 lead, flanker Taine Basham was shown a red card in the 18th minute. A try from Ryan Mills helped put Worcester in front 13-10 at half-time.

Rhodri Williams edged the Newport-based side ahead early in the second half before the home side finally took full advantage of the extra man with tries from Ollie Lawrence, Noah Heward and Jono Kitto. Despite a late Luke Baldwin try, Warriors held on for a crucial victory. In Pool 2, Toulon remain unbeaten following a 37-17 win at home to London Irish. France scrum-half Baptiste Serin scored two tries in the first half at the Stade Mayol, sandwiching Steve Mafi’s first try for the Exiles which kept his side in touch at the break as the visitors trailed 15-10.

But Toulon grabbed the game by the scruff of the neck after the break via tries from Ramiro Moyano and Masivesi Dakuwaqa to open up a 27-10 advantage before two red cards soured the game for Toulon’s Theo Dachary and Irish flanker TJ Ioane.

Although Tom Fowlie grabbed a late try for the visitors, Toulon finished with a flourish as Moyano grabbed his second try. Josh Adams carried on the try-scoring form he showed for Wales at the World Cup as Cardiff Blues stormed to a 54-22 win at home to Pau in Pool 5’s evening game.

Top 10 highest earning footballers – with Ronaldo and Messi on top