We can thankfully now stop agonising about whether the Waratahs will field their Wallabies stars against the Highlanders in the final round – a debate that never should have even got to this stage.

The Brumbies’ convincing win in Parramatta ended the Waratahs' season in the right way, with absolutely no ambiguity about who deserves to play in the finals. 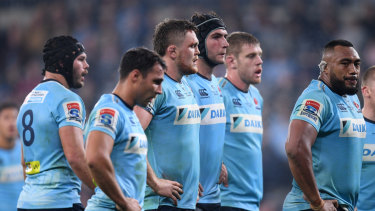 Curtains: The Waratahs look on during their defeat to the Brumbies.Credit:AAP

Having admitted they overplayed their Wallabies last year, the Waratahs have had plenty of time to come up with a strategy to live without them.

The other Australian sides have had to take their medicine in terms of rest weeks and had the Waratahs won on Saturday and picked their Wallabies for the last game the resentment it would have caused outside NSW would have lingered for years.

It's true that Daryl Gibson would have 'owed' his players the opportunity to push for a finals place but an agreement – even of the verbal, non-formal kind – is still an agreement and Australian rugby desperately needs its stakeholders to be pulling in the same direction. 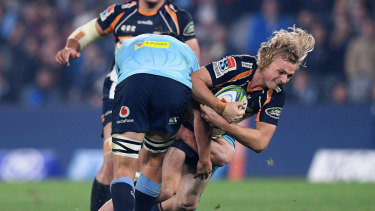 Joe Powell makes a run for the Brumbies.Credit:AAP

The other thing to like about the Brumbies was the performance of No. 9 Joe Powell.

He had some highlight-reel moments earlier in his career but I'm not sure he has ever played better than the second half of 2019. He's playing tough and smart and he made some great tackles when the Waratahs did manage to threaten in the first half.

He's back on the Wallabies' radar, big time.

The Reds scored an excellent, patient multiphase try to beat the Blues on Friday.

Too often this year there has been an aimlessness to their play but in the final minutes against the Blues they looked like they knew exactly how to exploit the 14-man Blues.

However, the night was bittersweet because it appears that Samu Kerevi will take his services to Japan. Colleague Georgina Robinson has indicated that Rugby Australia simply doesn't deem Kerevi a high enough priority to keep.

Yet if anyone deserves the security of a longer-term Rugby Australia deal it's Kerevi, who has developed into Australia's best No. 12 with his strong running and offloading game.

At 25 years old he has time to improve as well and is clearly respected and loved by his teammates in Brisbane.

Money is obviously tight but it will be a crying shame if Kerevi wants to stay but ends up going because funds have been directed elsewhere.

The Crusaders were always going to bounce back after their loss to the Chiefs the week before so life was going to be tough for the Rebels.

However, even after a 66-0 shellacking I'm not convinced Dave Wessels is going to be losing too much sleep.

The Rebels' season was always going to be defined narrowly – if they make the finals it's a success – and that is still within their control.

The mathematics are simple for them: if they beat the Chiefs in Melbourne on Friday they are in the finals.

Their selection for the Crusaders game indicated they were targeting that game and the importance of making the finals for the first time cannot be underestimated.

It would be transformative for the club. The Western Force never managed to play finals footy during their time in the competition and we all know what happened to them.

5. It's hard not to get excited by these Junior Wallabies

The Junior Wallabies were trailing the Irish until the final quarter in the crucial World Rugby Under 20 Championship clash until blowing them away 45-17 with a late flurry of tries – that's always a sign of a good side.

The dry conditions in Argentina are suiting the Australians, who now look poised to finish top of a tough pool after beating an Irish side that was down to 14 men for most of the game.

New Brumbies signing Nick Frost scored a memorably try, showing great pace for a big second-rower and the ingredients are all there for the Junior Wallabies to give the tournament a real crack.

One of their main rivals, New Zealand, scored some slick tries in their 52-33 win against Scotland but their second-rowers look a bit undersized and the Scots had their scrum under pressure at times.

Far away from the Israel Folau fallout some good things are happening in Australian rugby.

Team of the week:

Hamilton targets titles landmark but what other records can he reach?

Hamilton targets titles landmark but what other records can he reach?