They were three of the most ­dangerous opponents England rugby hero Ben Cohen has ever faced – and they almost took his life.

The 40-year-old World Cup winner was gang-tackled by a triple whammy of a deadly heart condition, blood poisoning – and glandular fever.

He was well and truly floored and had to be blue lighted to hospital.

“I’ve never had a problem with dying,” he says.

“But when you’re being told if you hadn’t come to hospital you might not have made it through the weekend, you then realise you’re not invincible.”

His nightmare began in June 2017 with chest pains. His GP suspected a heart attack and he was rushed to A&E near his home in Northampton.

But doctors diagnosed pericarditis, inflammation of the protective, fluid-filled sac around the heart.

“The pain was astronomical – it felt like someone was pulling my ribs through the back of my spine,” dad-of-three Ben recalls.

If that wasn’t bad enough, it soon became clear Ben also had sepsis, life-threatening blood poisoning that can lead to multiple organ failure.

And to cap it all, docs also found he had glandular fever, potentially the cause of the other two conditions – and which, ultimately, would have the biggest impact on the sportsman’s life.

“The sepsis and pericarditis, although deadly, were quickly treated with five days of antibiotics,” says Ben.

The virus, for which there is no ­treatment, begins with high ­temperatures and swollen glands but can cause extreme exhaustion which lingers for months.

“I had two rounds of it,” says Ben. “It came and went in about eight weeks but then, in January, it was back and it hit me so hard.

“I drove to Bournemouth for a wedding, made it to the ceremony and then went to bed. I was in a real mess.”

The impact his chronic fatigue had on family life was particular upsetting for him.

“I’d sleep solidly eight or nine hours at night then go to bed twice a day for up to an hour and a half at a time. I’d gone from getting up and being active all day to having no energy. It was really horrible.”

Even going on holiday was too much to handle.

“We went away twice during that second bout, and I’d be done in after putting sun cream on the kids.”

The cloud finally began to lift in May, but Ben says he is only just properly back on his feet now.

“The emotional journey you go on is very similar to an injury in that you’re looking at a year, give or take, of sitting around.

“When I was playing ­professionally I hated being injured and would play through them when I shouldn’t have as I would get really frustrated sitting on the sidelines.

"With glandular fever you don’t have a choice. I couldn’t do anything, not for lack of trying. You have no energy.
I’m only just coming out the other side.”

Ben says going vegan helped get him back on track.

“I found myself eating rubbish because I craved sugar the entire time,” he says. 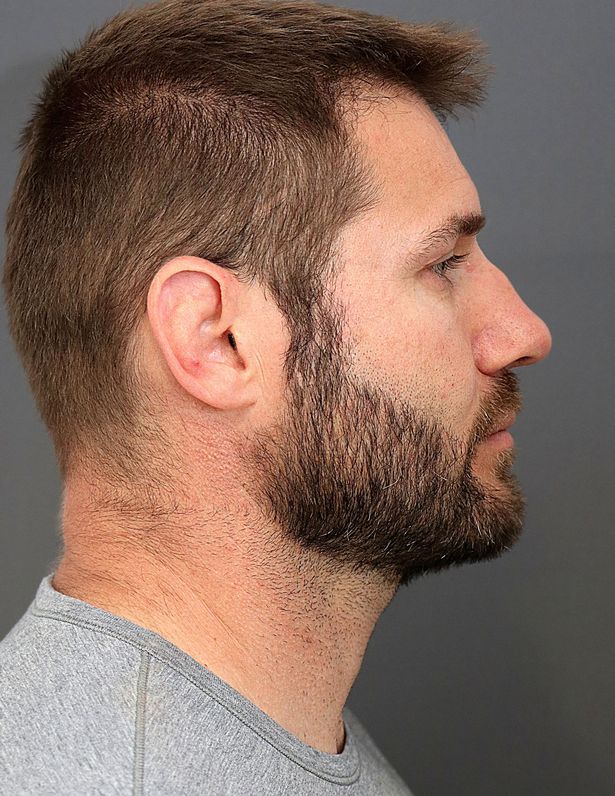 “You end up in a bit of a mess. So I decided to go vegan for six months as it’s power food.

"There’s more protein in a handful of kidney beans than a good steak. I didn’t want to do it forever, but if I were a sportsman again I’d definitely be vegan.”

Being unwell so long took its toll on Ben emotionally and physically.

“I’d lost a lot of weight from not being at the gym and was so gaunt around the eyes. I saw myself in the mirror and thought, ‘Christ almighty, I still look ill’ even though I was feeling better.

“I’d never felt the need to have any of sporting injuries fixed before but it made me want to look healthier again.”

So when he read about Ellanse, a type of filler gel which could fix his nose and cheekbones without surgery, he went for it.

The 30-minute process involved injecting microscopic beads of a medical-grade polymer between the muscle and the bone where he had injuries. “It boosted my ­confidence,” he says.

“Kristina thought it looked brilliant and friends told me I looked really well.”

If Ben has learned anything from his experience, it is the importance of listening to your body. He admits he had been disregarding symptoms weeks before he ended up in hospital.

“The night before I was admitted I’d been running around the garden with my girls – it wasn’t until later that I ­realised I’d ignored all the warnings.

“When I had been training I had been getting sore, tired muscles between my ribs like I’d strained myself. I was breathing heavily and feeling tight across my chest,” he says.

“When I look back now that was the pericarditis. Other than that I’d felt fine and it’s hard work getting a doctor’s appointment these days so I ignored it and just skipped my bench work.

“Once I was in hospital, I had that same sensation but 100 times worse. All I thought was ‘I’m not ready to go yet, I want to see my girls grow up’.

"I’ve always been one of those who just crack on when they get a sniffle, but now I know you ignore your body at your peril.”