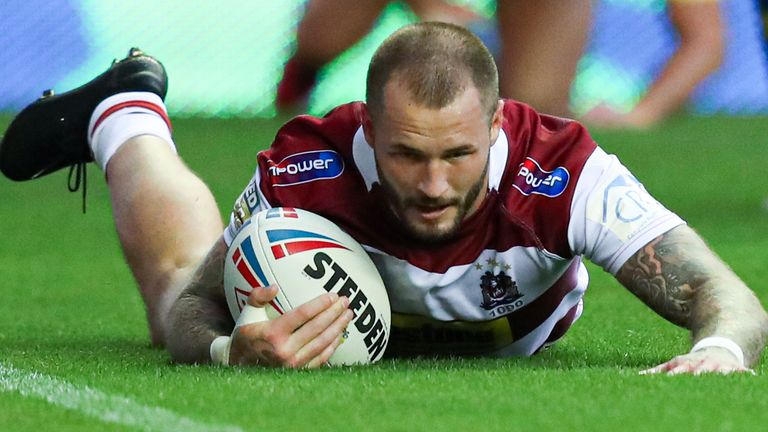 Zak Hardaker took another major step towards redemption on Monday when he was named in the Great Britain squad for the tour to New Zealand and Papua New Guinea.

The former Leeds and Castleford full-back, who was not in either of the England or Great Britain performance squads announced earlier in the season by national coach Wayne Bennett, was the surprise inclusion in his 24-man party.

As expected, Bennett has chosen all three Australia-born players who qualify through the grandparent rule and have demonstrated their desire to play for their adopted country in the forthcoming Test matches against Tonga, New Zealand and Papua New Guinea.

They are full-back Lachlan Coote (St Helens) and half-backs Blake Austin (Warrington) and Jackson Hastings (Salford), who were all short-listed for the Man of Steel award won by Hastings after hugely-impressive first full seasons in Super League.

Coote has already represented Scotland and the return of Great Britain has paved the way for Ireland international Joe Philbin, the Warrington forward, to force his way in but there is no Welsh involvement after St Helens forward Morgan Knowles was ruled out through injury. Saints captain James Roby is another injury absentee while his club’s Grand Final win over Salford came at a considerable cost, with centre Mark Percival (rib) and winger Tom Makinson (shoulder) sustaining injuries which cost them places in the squad.

Bennett said: “It was pretty tough actually, with a lot of players in contention. A couple of guys got injured and that’s taken a bit of the pressure off and given a couple of other guys opportunities.

“I think we’ve got a pretty good squad which is more than representative of the best players in the game in England and Australia.”

With a host of full-back options, Hardaker’s versatility clearly helped him get the nod ahead of Sam Tomkins, who is one of the players on stand-by in the England squad currently in Sydney preparing for this weekend’s World Cup Nines. Ironically, Hardaker, who turns 28 on Thursday, was the man chosen by Wigan to replace Tomkins 12 months ago as he set off on the road to redemption.

Hardaker was officially the best player in Super League when he was crowned Man of Steel in 2015 but his mental frailty had been exposed two years earlier when he was thrown out of England’s World Cup squad for a breach of discipline.

Eventually released by Leeds, he looked to have got his career back on track when he played a key role in Castleford’s run to a maiden Grand Final in 2017 but was suspended in the run-up to the game after testing positive for cocaine.

After serving a 14-month ban, Hardaker was handed a lifeline by Wigan only to be arrested for drink-driving during pre-season training. However, his new club stood by him after he agreed to go through rehab which included a visit to the Sporting Chance clinic and he was arguably their best and certainly most consistent player in 2019.

As expected, Bennett has appointed former St Helens prop James Graham as captain in the absence of Sean O’Loughlin and Sam Burgess.

Bennett said: “No-one plays with more pride and passion than he does for his country, I can tell you.”

Graham, 34, is the only member of the squad with previous experience of playing for Great Britain, having won five caps from 2006-7, and with a record 44 England appearances, is set to bring up a half-century of caps against Tonga in Hamilton on October 26.

“It’s very emotional for me,” said Graham, who will lead Great Britain for the first time after previously captaining England. “It will have a history and tradition and it’s something that resounds with the fans and our sport.

“They will be four incredibly difficult matches but the difficulty rating was always going to be high. It’s a challenge for us, but as a group I think we’re going to grow into that challenge.”