James Tedesco has never taken strike at the SCG, but neither has an Australian been spun a web like the one an Englishman weaved on Friday night.

In a moment which was worthy of little halfback George Williams landing on the SCG's famed honour board, Canberra's No.7 bamboozled the game's best fullback a couple of cricket pitches away from where the cut strip should have been. 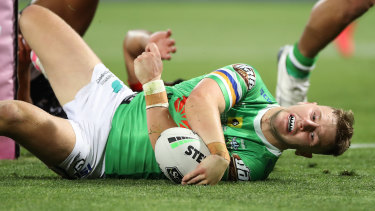 George Williams scored his own try before laying on a brilliant kick for Jack Wighton against the Roosters.Credit:Getty

Only minutes before Williams' game-breaking kick, Tedesco had been hobbling in backplay with a leg complaint, and few times, if ever, in his career has he looked so bamboozled fielding a ball from the deck.

His bad break handed the Raiders a 10-point lead – one which was slashed only minutes later when Tedesco benefited from a Sonny Bill Williams offload – and turned the NRL finals series on its head. Williams would hardly have got the same purchase on a fifth day turner in the middle of summer.

The Roosters were trying to become the oldest squad to win a grand final in more than 50 years, a collection of superstars Phil Gould predicted were showing signs of "coming down the other side of the hill".

Robinson said he wanted his players to do his talking for him on the weekend, rather than him talking during the week.

Chairman Nick Politis and Robinson will head into an off-season with 30-somethings Jake Friend and the Morris twins, Brett and Josh, all officially unsigned. The three of them have indicated a desire to play on with only a few strokes of the pen before their contracts are lodged.

The Roosters have dominated for the best part of a decade by adding a few moving parts around the nucleus of club stalwarts: Friend, Boyd Cordner, Jared Waerea-Hargreaves and Mitchell Aubusson, the club's most capped player who played his final match on Friday night.

Friend might finally get his first State of Origin jersey in a series where Cordner could be playing his last. No man has played the game tougher for longer. But the heart and soul of his club and state was twice left clutching at thin air when Josh Papalii and Joe Tapine scored.

At the end of the night though, no Roosters forward had ran for more metres.

No Rooster on the park was older than Sonny Bill Williams, the 35-year-old recycled in the NRL for his third stint with Robinson knowing his side had limped through the middle of the season with an injury toll few had seen in recent memory.

If he was only supposed to come back for a late season sugar hit, Robinson got it at the right time.

Part-time pugilist Williams climbed off the bench with his side on the ropes, trailing 16-0. By the time he huffed back to the sideline mid-way through the second half, they were behind only by four. Like the team he was playing for, Williams doesn't know when he's beaten.

But maybe the rugby league gods have finally squared the ledger.

Crows and Saints sweat on compensation, Broad set to stay a Tiger