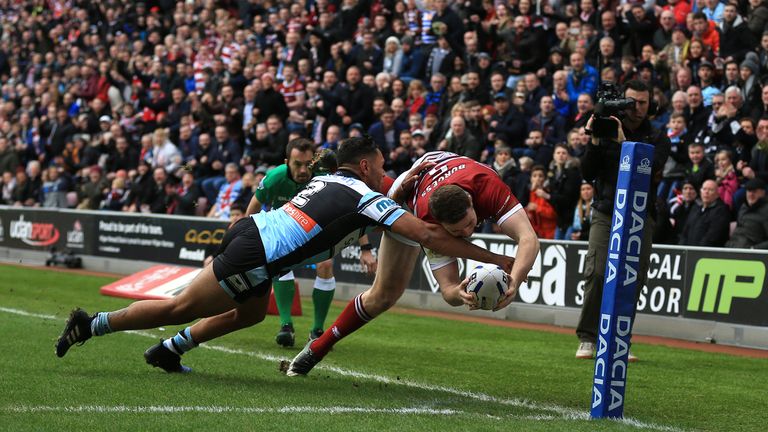 With the World Club Challenge live on Sky Sports on Sunday and the Wigan Warriors taking on the Sydney Roosters, Tom Mordey looks back at the Super League side’s previous form in the event.

Wigan are the most successful side in the history of the World Club Challenge. They’ve won four titles, more than any other team.

But, their 2017 success was their first victory in the competition for 23 years. Let’s look back at their finals – the good and the not so good…

The World Club Challenge returned in 1987 – 11 years after Eastern Suburbs (now Sydney) beat St Helens. Wigan invited Manly-Warringah over to fight it out for the tag of world champions.

So on a Wednesday night in October, the two sides did battle in front of a big crowd at Central Park. The game was a tight affair, with neither side managing a try.

Wigan’s David Stephenson kicked four goals in an 8-2 victory. And while the game was lacking tries, it certainly didn’t lack edge. The two sides clashed in several brawls, while Manly’s Ron Gibbs was sent off for elbowing Joe Lydon.

So Wigan became the first English side to win the competition and there were more famous nights ahead against Australian sides. 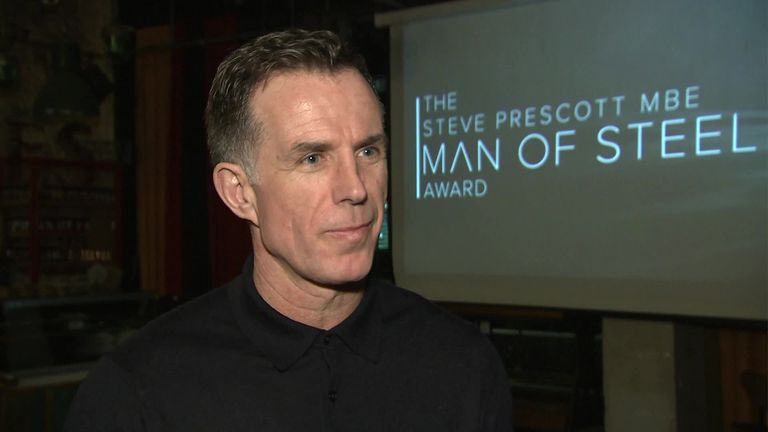 Wigan returned to World Club Challenge action in 1991, with Penrith Panthers the opponents this time round. Again, the game was played on a Wednesday night, but this time at Anfield, as Wigan took the game to a stadium famous for big matches.

Penrith were without two star players – Brad Fittler and Mark Geyer and Wigan dominated the game. Penalties were the order of the day early on, Frano Botica kicking four of them to edge Wigan into an 8-0 lead.

Penrith replied with a try through Darren Willis, but that was to be their last scoring action. Wigan centre Sam Panapa got over before half-time before David Myers scored late on to secure the win. A late drop goal from Joe Lydon put the icing on the cake as Wigan took home a 21-4 victory. 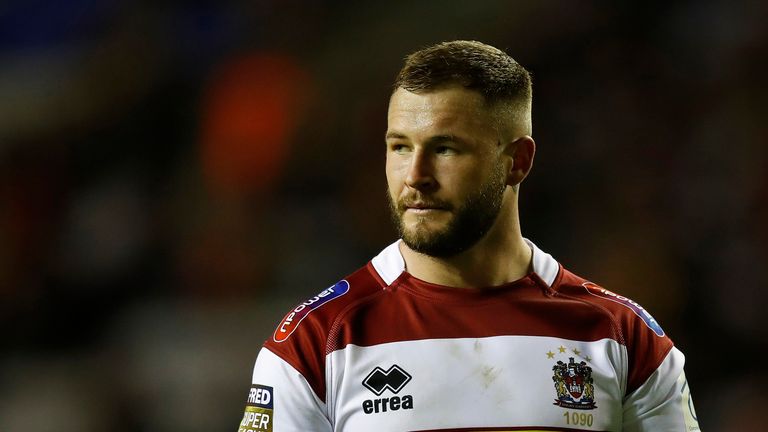 One of the most famous nights in Wigan’s history came in 1994. They had lost to Brisbane two years before on home soil and not many fancied Wigan to reverse that result in Australia in front of 54,200 – a record World Club Challenge attendance.

Test props Andy Platt and Kelvin Skerrett were both missing for Wigan, while Graeme West was in temporary charge of the team following John Dorahy’s sacking.

But the away side started brilliantly. Shaun Edwards’ high ball caused confusion, allowing Denis Betts to touch down before Barrie-Jon Mather burst through a gap, choosing to dummy rather than set Martin Offiah free, before beating Wendall Sailor to the line. Sailor replied for Brisbane to reduce the lead to 12-4 at half time.

And that was extended after the break, Michael Hancock knocking on, allowing Jason Robinson to race away for another try. The expected fightback came eventually, Hancock crossing to make amends for his error before Julian O’Neill went over to make it 18-14.

But a 66th-minute penalty from Franco Botica made it 20-14. And Wigan held on, producing some immense defence to keep out the Australians, producing a result many thought impossible. 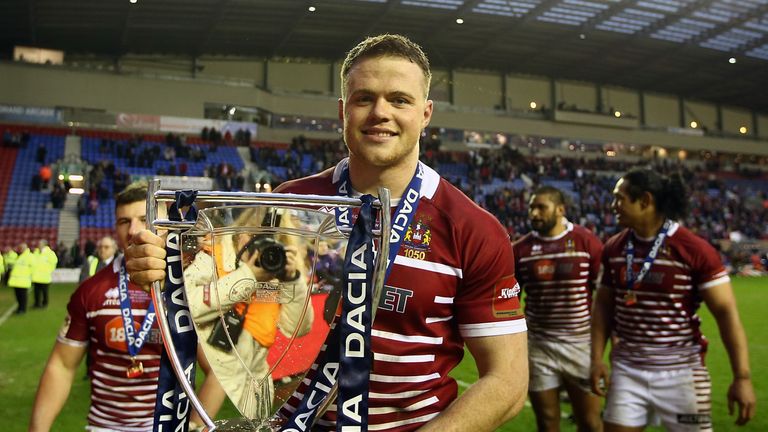 Wigan had to wait another 23 years before their next World Club Challenge success, having lost two finals in 2011 and 2014. The game took place as part of an extended World Club Series, with Wigan facing Cronulla Sharks in the showpiece event. 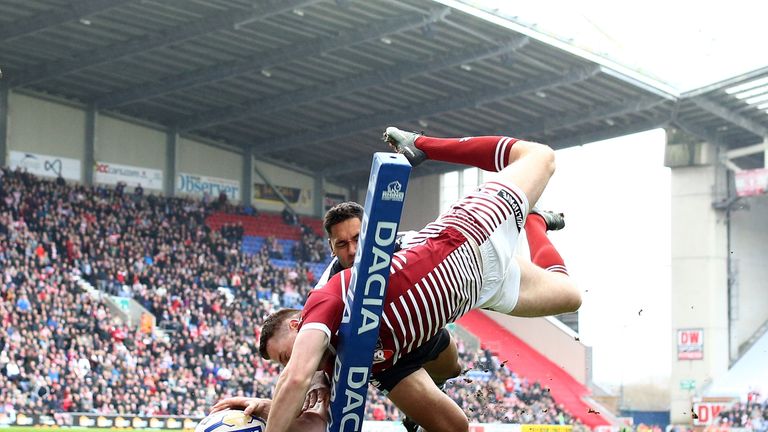 The Warriors were aiming for that record fourth victory and this time they were not to be denied. The hero at the DW Stadium was winger Joe Burgess, playing in his first game since returning from the NRL. He became just the second player to score a hat-trick in this event.

The first came from an acrobatic finish after just three minutes and he grabbed a second after good build-up work from the Warriors. Burgess also added the final touch, dotting down a kick in the final minute to secure a 22-6 win.

Oliver Gildart also crossed for the Warriors, while the Sharks only had a Jesse Ramien score to show for their efforts. They were the victims of two tight video refereeing decisions in the first half, but Wigan’s win was the first by an English club since Leeds in 2012.

After the 1991 victory at Anfield, Wigan were involved in the World Club Challenge again a year later in 1992. This time, Brisbane were the visitors, with the game held at Central Park.

The 1987 event saw plenty of aggro between the English and Australian sides and 1992 was no different, a huge early brawl erupting. Wigan did take the lead through a Frano Botica penalty, but they were no match for Brisbane.

Julian O’Neill and Kerrod Walters both scored tries to give the away side a 10-2 advantage at the break. Another brawl set the tone for the second period, and despite a spectacular try from Shaun Edwards, two scores from Michael Hancock ensured Brisbane took the trophy back to Australia in a 22-8 win. 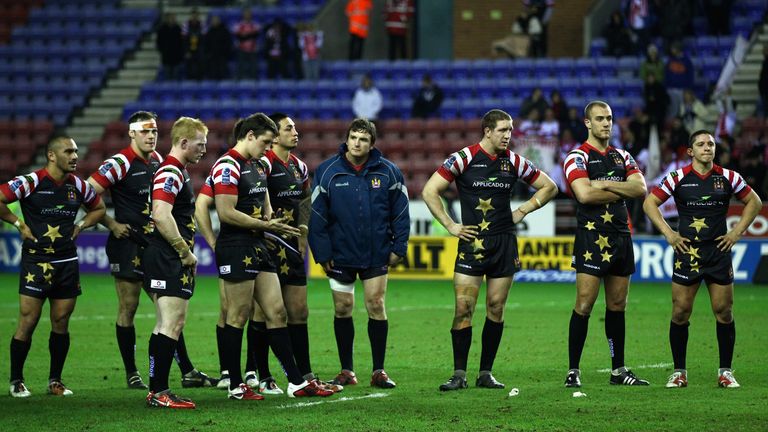 Wigan returned to England v Australia action in 2011, having failed to win Super League since the World Club Challenge returned in 2000. St George Illawarra Dragons came to the DW Stadium for their first appearance in the event.

They were missing Coach Wayne Bennett who returned home for family reasons. And the Warriors started brilliantly, racing into an 8-0 lead thanks to a George Carmont try and a Paul Deacon conversion and penalty. 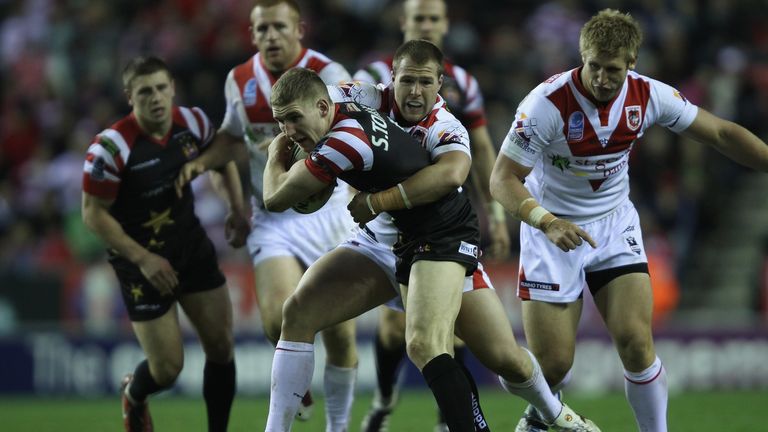 But the Dragons recovered, scoring two of their own tries in six minutes. Brett Morris crossed first of all, before Matt Cooper also crashed over. The two sides traded tries again before the break, Carmont and Morris both grabbing their second scores before a Sam Tomkins drop goal edged Wigan 15-14 in front.

That was as good as it got. The second half was a tight affair and the Dragons nicked it through Cameron King, the interchange hooker, who forced his way over from dummy half. And their defence held firm to deliver a first World Club title. 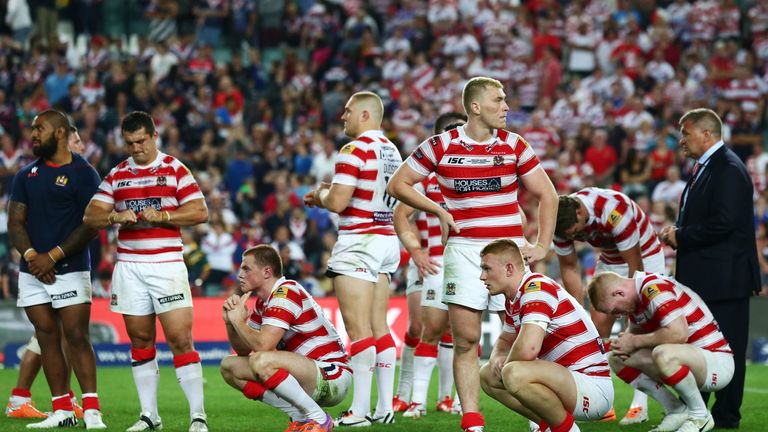 Wigan’s next attempt at the world title came in 2014. But this time the Warriors went Down Under to try and win the trophy, the first visit by an English side to Australia since Wigan’s famous win over Brisbane in 1994.

They faced the Sydney Roosters at the Allianz Stadium, but Wigan could not repeat their famous success from 20 years ago. The Roosters set the tone with an early blitz of tries, three coming in the first 22 minutes as Michael Jennings crossed twice and Sam Moa once. That left Wigan hanging on early doors and although they replied after the break through Joe Burgess, Jennings completed his hat-trick just five minutes later, capitalising on a loose Wigan pass.

Shaun Wane’s men did restore some pride – Josh Charnley got over for two tries in seven minutes to briefly threaten a comeback, but the Roosters proved too strong. Jared Waerea-Hargreaves crashed over before Shaun Kenny-Dowall also grabbed a four-pointer to secure a 36-14 win for the Roosters.