Collingwood coach Nathan Buckley should not relent to pressure by fans or pundits to coach a more attacking and expansive style of football if he thinks his method will get the team better results, according to Leigh Matthews.

The Pies played a large part in making their clash with Geelong on the weekend one of the most dour games in recent memory. This came off the back of a series of cautious efforts this season, full of backwards and sideways ball movement and conservative positioning of players. 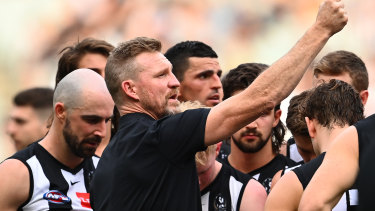 Nathan Buckley believes his side is improving, despite some ugly games. Credit:Getty Images

It prompted Brisbane Lions triple-premiership player Jonathan Brown to label the Pies as “deplorable to watch”, with some fans – neutral, and black and white alike – also complaining on social media about Collingwood’s careful approach in 2021.

Despite the Magpies blooding a long line of first-gamers and playing with a developing midfield, former Collingwood premiership coach, and Brown’s former Lions mentor, Matthews is of the belief that playing to win is better than playing to entertain, no matter what stage of development a team is in.

Buckley is out of contract at season’s end after taking over as coach in 2012.

“The coach’s job is not to create the spectacle, that’s the bonus if you can,” Matthews said. “If I was coach, you are trying to give yourself the best chance of winning.

“Whatever it takes. If you are a fan watching, you might have a different attitude … but I would think Collingwood fans would want to be as close to winning as you possibly can.

“The rest of us [neutrals] who aren’t totally biased are worried about the spectacle of the game and all that stuff. I think most footy fans barrack for their team to win.

“Any coach worth his salt is just trying to do his best to get the team the best chance of winning. And that is the job.

“There is no confusion. No coach is saying ‘I want to make it a good spectacle even if it gives us a worse chance of winning’. I have never known a coach to do that. They’ll talk the talk, but bottom line [is] giving your team the best chance of winning is what any coach wants.”

For their caution, the Pies are not winning. They sit 16th with two wins and nine losses. However, they are ranked fourth when it comes to smallest losing margins against top eight sides. They have an average losing margin of 14 points across games with Geelong, Port Adelaide, Sydney, West Coast, Brisbane and the Western Bulldogs.

Brown was scathing on the Fox Footy coverage of the Collingwood versus Geelong match, where the Pies kicked 1.11 in three quarters and then rallied to finish with 6.15 and lose by only 10 points.

“I know it wouldn’t be a coaching direction telling them to go that slow, but it’s deplorable to watch … the players, I think, are lacking confidence.”

Buckley was optimistic post-game, despite one goal to three-quarter time against Geelong, which included none in the first half. That followed four in three quarters against Port Adelaide and one in three terms against Sydney.

“We weren’t able to complete our play in front third,” Buckley said on Saturday.“We are playing a brand that we are more confident in and more positive about than potentially a month ago or two months ago.

“We are actually moving the ball through the back half a lot better, it is just that final piece for us [that is falling down].

“You look and you go ‘0.7 at half-time and you think look we’re not playing that bad, like we’re in the game’. We were 16 inside [50s] to 14 with eight minutes to go in the second quarter … there’s some elements we need to improve on, but we are getting games [into young players].

“We are playing some pretty good sides and we are being very competitive.”