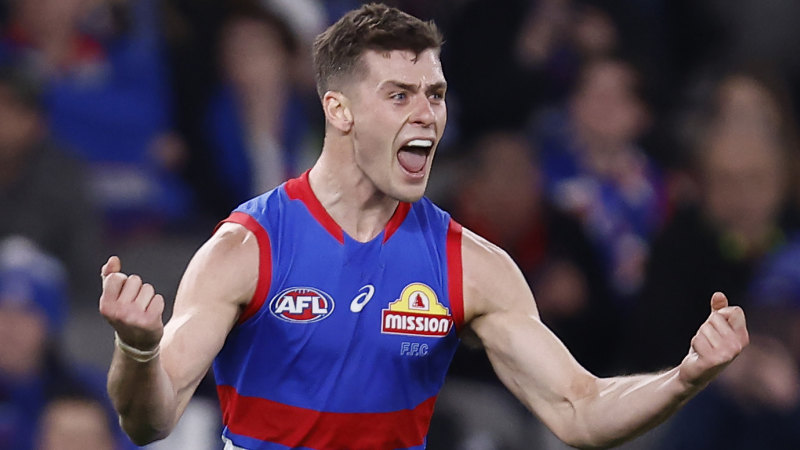 Dunkley stormed home in the tight race on Wednesday night, polling 52 votes over the final three rounds and the elimination final loss to Fremantle to overcome fellow onballer Tom Liberatore – who was consistent through the rounds – and poll the maximum votes.

Josh Dunkley has requested a trade to the Brisbane Lions.Credit:AFL Photos

The 25-year-old was a consistent performer across the year, averaging 25 touches, six tackles and six marks a game, while finding the scoreboard regularly with 18 goals and not missing a game.

Dunkley’s accolade comes a week after the star onballer requested a trade to the Brisbane Lions, seeking a six-year deal worth more than $4 million, after spurning a five-year offer from the Dogs.

Alongside Liberatore’s Doug Hawkins medal for second place, he also secured the John Van Groningen Domestique of the Year award, which is voted on by the players.

The 30-year-old was reliable in clearances, averaging more than seven clearances per game this season.

Naughton, Gary Dempsey medallist, reaffirmed his star development and position in the forward line with a career-high 51 goals this season, at an average of 2.4 goals per game. The 22-year-old booted three or more goals in 10 games this year.

Emerging swingman, 19-year-old Sam Darcy, won the Chris Grant best first year player award, after an impressive four games in the back half of the season, including the final against Fremantle.

Skipper Bontempelli was recognised for his role in his side’s loss to Fremantle in the elimination final with 30 disposals and two goals, named as the club’s best finals player.