Manly players were talking tactics in a team meeting on Monday when Dylan Walker took things in an unexpected direction.

"I said thank you to them for being good mates to me," Walker said. "There was a lot of talk about football stuff and then I sort of went the sentimental side. I got on the touchy side, thanking them for being there. 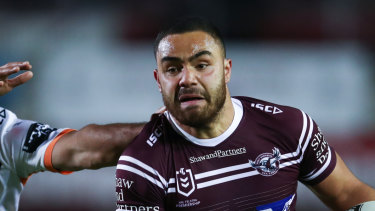 Dylan Walker has thanked his teammates for standing by him.Credit:DPP

"Not just for me but my family too. They’ve been really supportive, they could have easily turned their heads and [been] ‘don’t worry about him’.

"We’re a close-knit group, and I’m grateful for that."

Walker had to lean on that support network after he was charged with assault occasioning actual bodily harm and common assault. While he was found not guilty of pulling his fiancee Alexandra Ivkovic to the ground by her ponytail following a fight over a PlayStation in May, the Manly playmaker admits he was "looking down the barrel of potentially being gone" from the game altogether.

One of the first players affected by the NRL’s new "no fault" stand-down policy, Walker was allowed to return for the Sea Eagles after the verdict. That experience has ensured he cherishes opportunities like this weekend’s finals clash against Cronulla.

That’s the most important thing, especially when you face those challenges in life, that you have that good support system around you.

"It’s been a big, old rollercoaster," Walker said of his season. "Coming into this week, I just don’t take any game for granted now. I was looking down the barrel of potentially being gone, so I’m blessed each day. I reflect on it every day, how grateful I am to have such great teammates, family, friends and a support base around me.

"That’s the most important thing, especially when you face those challenges in life, that you have that good support system around you.

"It’s very important and I’m very grateful I have a loving partner and little family. My sole focus is all about them, and footy is second to me but very important." 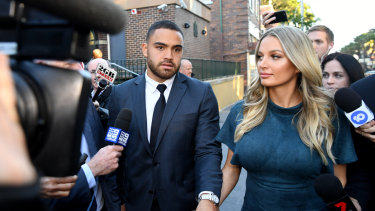 Walker has represented NSW and Australia after making his name in the centres but has switched to the No.6 jersey in the run to the finals. After combining with Daly Cherry-Evans in the halves, the 24-year-old wants to finish his career as five-eighth.

"I’m loving it at five-eigth at the moment, I’m really enjoying my time there," he said. "I’m having fun. I get to call the ball a little bit more, you get it a bit earlier. I think that’s the position I’d love to stay in. I understand the game a bit more and Chez [Cherry-Evans] and Dessie [coach Des Hasler] have helped me with that, especially Chez.

"He’s one of the best halves in the game running around. I think this is the position for me as a player to excel."

Walker is off contract at the end of the season but is hopeful of earning an extension.

"I’ve put that in the background, I just want to focus on football stuff," he said. "My mind hasn’t been there. I’ve had little conversations about it, but I just want to play finals football first and let that sort itself out.

"I’d love to stay here if I could. You’ve got to ask Dessie about that. I’m optimistic about it, but for me it’s just finals and trying to get a win."