Melbourne are unlikely to punish Steven May for making the ill-advised decision to go out for drinks on the weekend while injured, but the player will also be left under no illusions about the club’s thoughts on his decision.

May was out drinking at a Richmond bar at the weekend while recovering from injury. It is understood he was with some former Gold Coast teammates, including Dan Gorringe, now back playing amateur football in Melbourne. 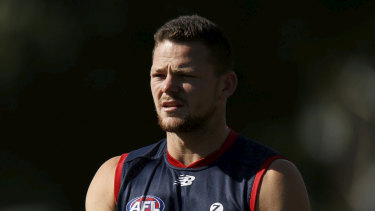 Defender Steven May’s difficult start to life with the Demons has continued.Credit:Darrian Traynor

He was not drunk, did not misbehave, and only had a few drinks, but when in rehabilitation from injury players are not normally supposed to drink.

The fact May was a highly prized recruit who through injury has yet to have an impact on the field at his struggling new club and arrived out of condition, compounding the problem.

May will speak to his teammates this week about his behaviour but he is not likely to be sanctioned by the club.

It is understood May has also been dealing with some personal issues in recent weeks.

The talented full back joined Melbourne as part of the exchange that saw Demons full-forward Jesse Hogan return home to Fremantle. May only managed one game this season before being injured.

He had hamstring troubles in the pre-season as he pushed to lift his fitness levels, then suffered a groin strain against Geelong. He remains several weeks from senior selection.

“I’m disappointed and I’m disappointed for Steven May, he’s had a troubled start at the Demons,” commentator Gerard Healy, a Brownlow medallist with the Swans, who began his career at Melbourne, said on Fox Footy.

“And to be caught out or even just to do it behind closed doors, to me suggests the bloke hasn’t learned his lessons.”

Former Melbourne captain Garry Lyon said the club would be likely to embrace May and try to work with him.

“I think they will try and take him under their wing and try and educate him because he’s not playing anyway,” Lyon said.

“If this is not a wake-up call for him, and may be it should have been when he turned up for training a little bit out of shape.”

“I just wonder whether that was one of the reasons Gold Coast was happy to move him on,” Brown said.