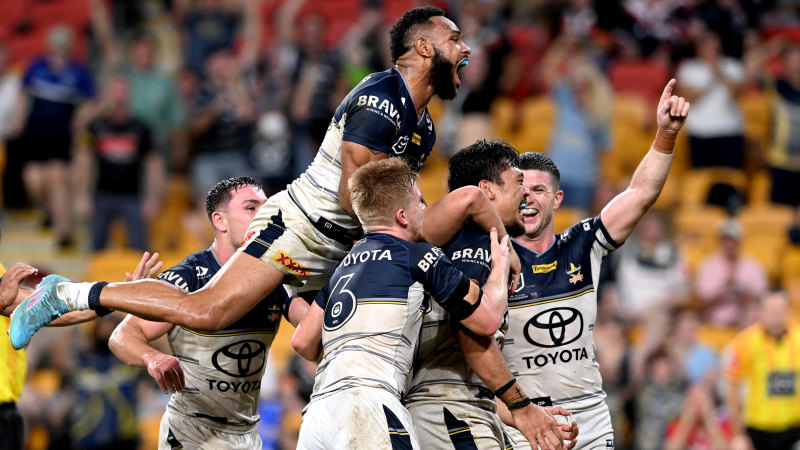 The Wests Tigers’ forgettable campaign continued after a hamstring injury to Luke Brooks and ugly crowd abuse of halves partner Jackson Hastings compounded a 36-12 Magic Round loss to the rough-riding Cowboys.

While North Queensland rattled up their fourth straight 30-plus score – a first in their history, the Tigers will sweat scans on Brooks’ hamstring after he was forced out of the contest at half-time.

A heavy head knock for Jake Simpkins and Zane Musgrove’s shoulder issue left the Tigers with just one fit player on the bench midway through the second half, while Hastings was the target of unsavoury abuse that reportedly saw derogatory comments made about his family as he lined up a shot at goal.

The Tigers half made a beeline for the NRL ground manager and pointed out the individual in the Suncorp crowd, with footage later showing security escorting a patron out of the stadium.

While the Tigers sit ahead of Friday’s opponents Canterbury on points differential only, the Cowboys’ wild ride at the top of the ladder continues thanks to their band of emerging young stars.

Flyer Murray Taulagi saved Magic Round’s finest feat for last with the try assist of the season complimenting his own double.

Raised on rugby until the age of 17, Taulagi’s pass while parallel to the turf and well past the corner post was more akin to the Harlem Globetrotters than either oval-ball code, gravity and a fair Jackson Hastings tackle defied in the process.

Scott Drinkwater was happily on hand to finish off one of the tries of the season thus far, setting the tone for a tit-for-tat opening 40 minutes.

Tigers rookie Junior Tupou – a late call-up for Oliver Gildart (calf) after also returning from rugby and the Junior Wallabies – jagged a debut try in response, flying high and past Taulagi for a cross field kick.

Taulagi’s first try, thanks to right centre Peta Hiku creating an overlap by switching to the opposite edge, was matched by Luke Garner before Kyle Feldt dragged the lead back the Cowboys’ way once more. 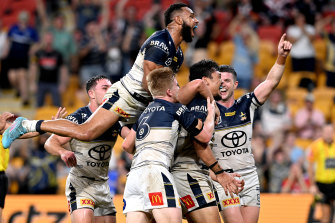 The Cowboys celebrate Jeremiah Nanai’s try in the win over the Tigers – the first time the North Queensland club have ever scored more than 30 points in four consecutive outings.Credit:Getty

The sight of lightweight prop Reuben Cotter sliding into the backfield two minutes later, dummying and stumbling past Starford To’a as he scored a 70-metre try, was one for front-rowers everywhere before second half tries to Taulagi, Hiku and Jeremiah Nanai put the Tigers to bed.