Wayne Bennett has described concerns the NRL’s latest crackdown could ruin State of Origin as “hysteria” and believes the series will be better off without contact to the head.

Earlier this week, Roosters duo Victor Radley and Angus Crichton were rubbed out of the series opener after being found guilty at the judiciary. Handed five weeks on the sidelines, Radley will also miss Origin II. 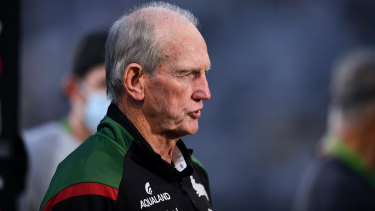 Bennett said Melbourne, Penrith and the Rabbitohs – who are all in the top four – had no issue with the crackdown, which proved the game can rid of contact to the head and neck without it having a negative impact on quality.

Paul Green takes over from Bennett as Maroons coach this year, and Bennett said he had already spoken to the new coach a number of times to assist him in the role.

“I want him to do well,” Bennett said. “If you’re an Origin coach you want your team to behave your best. If someone does ten in the Origin you can just about kiss that game goodbye because of the quality of players. I think they will be right across it.”

Bennett labelled Cody Walker a “vulnerable” player when it came to Blues selection and said he would also suit a spot on the interchange bench.

“There are other five eighths around, so he is in a vulnerable position,” Bennett said.