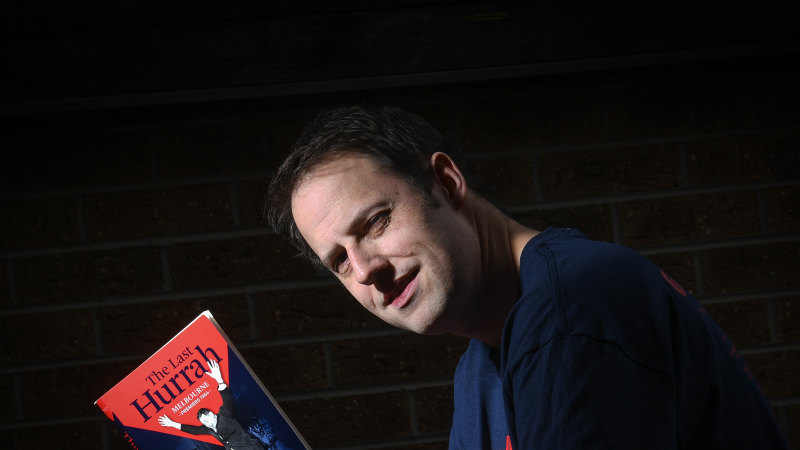 Adam Woolcock grew up in Hawthorn, in a great Hawthorn era, surrounded by Hawthorn supporters. In 1988, as the Hawks prepared to play their seventh grand final in a row, seven-year-old aged Woolcock decided he would barrack for their opponents, whoever they were. They were Melbourne, and they lost by a record 96 points.

“If only Murray Wrensted had kicked that goal at Waverley,” Woolcock said. Wrensted was the West Coast forward who had a late chance to eliminate the Demons in an earlier final that year, but missed. Woolcock can’t help but note that all four other teams in that final series have won premierships since, but not his Dees. 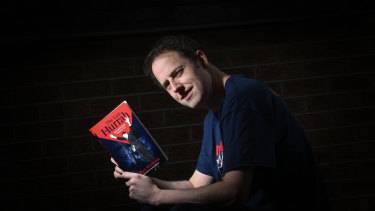 And they are his. He had made his pledge, and it was sealed in blood. Now 40, he uses the shorthand of the long-term fan to annotate the mass travail and scant triumph since.

The near-merger of 1996. The short, bleak Mark Neeld era. The absconding of Tom Scully. Round 23, 2016, Paul Roos’ last game as coach, back at Kardinia Park, lose by 111 points. “So Melbourne,” Woolcock said. It’s all seared into his soul.

But so is Allen Jakovich’s eight goals to beat Essendon in the 1991 elimination final, and Nathan Jones’ goal for the true believers to snuff out Geelong in the 2018 elimination final. The MCG rocked on its foundations that night. Then it all came crashing down in the preliminary final against the Eagles in Perth two weeks later. 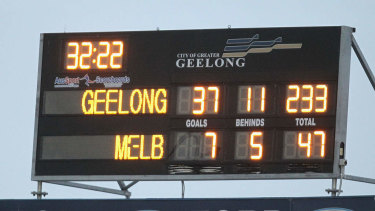 One of the many low ebbs for Melbourne.Credit:Hamish Blair

“It was classic Melbourne: dangle it in front of your eyes and then rip it away, never to be seen again,” said Woolcock.

In 2009, Woolcock began to ventilate his calling as a Melbourne tragic on a history website, demonwiki, and a blog, demonblog. Since, he has produced around 1.5 million words of considerably greater erudition and eloquence than the average fanzine. In 2016, he parlayed them into a book called The Great Deepression, documenting the almost unrelievedly grim decade from 2007.

His next idea was to explore the also barren decades following the Demons’ last premiership in 1964 and the collapse of the Norm Smith empire. Fascination with misery: it must be a Melbourne thing.

But publisher Hardie Grant convinced him to focus on the more uplifting tale of the ’64 flag itself. The Last Hurrah was due out last year until stalled by COVID-19. As luck would have it, it was published in July this year, just as the Demons were beginning to gather for what is now their best chance to win a flag since ’64. 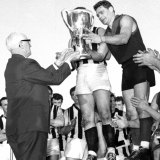 Luck, sort of. Almost as soon as The Last Hurrah landed in the bookshops, they closed. It’s a very Melbourne turn of events, and this year that could apply both to the city and the football club. “I had about a week to run around rearranging displays to give it more prominence,” Woolcock said.

Seven of the 20 who won Melbourne that landmark flag are no longer with us. Woolcock interviewed most of the rest, two face-to-face, the rest by phone as Melbourne’s long lockdown gripped. Typical of old footballers, their recalls were mostly sharp and their sense of wonder at what they did undying.

But the historian in Woolcock loves the minutiae that emerges. He’s found players who trained at Melbourne, but did not play a senior game. One in 1964 came down from Strathmerton. His name was also Norm Smith.

Woolcock also discovered – this is not in the book – that in 1982, the Melbourne reserves runner got a vote in the Gardiner Medal for best-and-fairest in that grade, courtesy of an umpire who misread the team sheet. More remarkably, Carlton’s under-19 runner got three votes in the Morrish Medal the same way. He was David McKay, a retired champion. 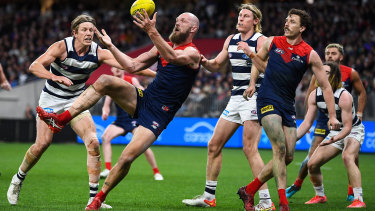 Woolcock did not miss a game for years. Now working shifts in public transport, he sometimes depends on the radio and the mind’s eye. He’s excited, an uncommon Melbourne feeling. “It’s the best Melbourne team I’ve ever seen them put on the park,” he said. “If not for sheer talent, for the way they’re playing.”

The last two years, he’s been at work during the grand final. Other years, he’s watched while flicking through a book. This year, he’ll be glued to the screen.

He has no regrets about the fate his seven-year-old self unwittingly chose. “I can’t believe it’s happening,” he said, “but everything else doesn’t matter any more. Everything else is an entrée to the ultimate success.”

Momentarily, he becomes philosophical. A two-week grand final week will do that. “Everything that happened – the defeats, coaches sacked, players leaving – did it all need to happen to create this?” he said. “That’s the sort of mental gymnastics I’m putting myself through.”

You could write a book about it.