They are the forgotten two minutes that paved the way for Manly winger Jorge Taufua to celebrate his 150th NRL game on a sunny Sunday afternoon at his beloved Brookvale Oval.

Taufua was on Monday forced to alert the Sea Eagles to the fact he was about to reach the milestone, as official records – including the official media guide for the 2020 season – had him listed on 148 games. 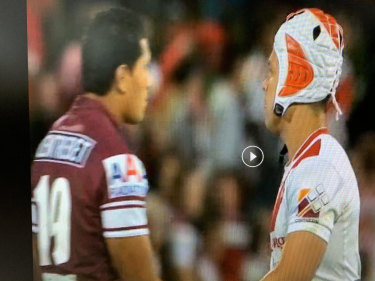 Jorge Taufua shakes hands with Jamie Soward after his blink-and-you-miss-it debut in 2012.

The Sea Eagles contacted the NRL, who consulted stats guru David Middleton, who duly discovered Taufua's debut in round four, 2012, had never officially been documented by Big League and the official data providers at the time.

Middleton even had a film still of Taufua shaking hands with Dragons playmaker Jamie Soward after the game, and watched footage of the fresh-faced winger playing in the final moments. 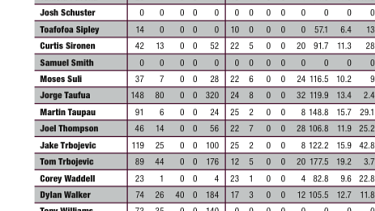 Jorge Taufua is still listed as having played 148 games in the 2020 NRL official media guide.Credit:Big League

"This will definitely be Jorge Taufua's 150th NRL game,'' Middleton said. "I watched the footage [of his debut] again on Monday – he didn't do anything, there were no tackles, no whatever, so he had no stats.

"As a result of the fact he was only on the field for two minutes and had no stats and all his columns were dashes, Big League left him out of their post-match stats. But Rugby League Week had him in there and rated him a one out of ten, and they wouldn't have done that if he didn't play.

"If you get on the field for five seconds, it still counts as a game. There were a few who did it in Origin. Grant Rix was a Queenslander and was even given a number by the QRL as an Origin player, but he sat on the bench.''

A company called STATS became the official date provider to the NRL in 2014, but there was no way they could have detected Taufua's appearance error from two years earlier. STATS could not be reached for comment.

Wikipedia also erased Taufua's debut from history with the site reading: "Geoff Toovey selected Taufua to make his NRL debut from the interchange bench for the Sea Eagles against the St George Illawarra Dragons but he didn't get on to the field in the club's 6-17 loss at Kogarah Oval.'' 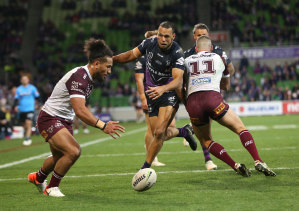 Had Taufua not raised his concerns, the Samoan wrecking ball would have celebrated the achievement the following week – 75 kilometres up the road against the Sydney Roosters at Gosford, not a packed Lottoland.

While grateful the record had been set straight, Taufua said it would mean nothing if the Sea Eagles did not defeat old foes Melbourne and rival winger Suliasi Vunivalu.

"When I started I didn't think I'd get to 150, and to now do it at the one club is pretty special,'' Taufua said. "I'll be up against Vunivalu and he's had it over me most of the time. One day he scored four tries in the first half. I'll have to be on my game.''

Known for his massive hits, especially on unsuspecting centres, Taufua even frightened a few of his teammates during full-contact sessions over the summer. At least one high-profile player has made a point of refusing to run the ball against him.

But there is one star teammate Taufua makes a habit of steering clear of for fear of retribution – Jake Trbojevic.

"I'm not here to injure my teammates, but I definitely won't run at Jake,'' Taufua said with a smile. "Jake is known for folding people in half, especially wingers. I'll stick to [smashing] other players.''

Manly officials are banking on a packed house for the opening-round Storm clash. Trbojevic trained in an ink bib on Tuesday, as did Addin Fonua-Blake, while Curtis Sironen was spotted at the start of the session running with the rehab group.