Sydney are unhappy with the severity of the sanction given to captain Dane Rampe and are contemplating whether to lodge a formal appeal to the AFL.

Six days after the controversial game against Essendon at the SCG, the Swans and the league are at loggerheads over the fine handed to Rampe for his "derogatory" sledge at an umpire. 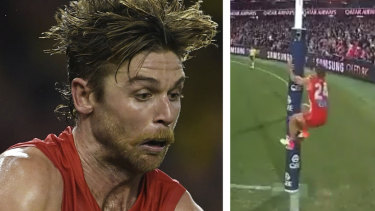 Controversy: Sydney’s five-point win over Essendon has been overshadowed by Dane Rampe’s actions as David Myers lined up for an after-the-siren shot on goal.Credit:Photo: AAP, Seven

Rampe was fined $10,000, half of which has been suspended for the rest of his career, for telling umpire Jacob Mollison he "talks like a little girl". He was given a fully suspended $1000 fine for climbing the goal post.

The Swans acknowledge Rampe erred with his comments, which the AFL said were "completely unacceptable", but believe the fine is excessive.

The club wrote an email to the AFL on Wednesday outlining comparative fines as they feel Rampe had been too severely punished. They want the fine to be lightened and the length of which the fine is suspended to be shortened. But the league responded by saying it was not interested in drawing comparisons with other incidents and the penalty remained.

It's believed the case involving Richmond champion Dustin Martin was one of several used to highlight their point. Martin was slugged $7500, $5000 of which was suspended until the end of 2020, for raising his finger at Greater Western Sydney ruckman Shane Mumford and appearing to mimic the snorting of drugs.

It's understood the sexist nature of Rampe's remarks and that they were directed at an umpire, instead of a player, contributed to the league imposing a heavier fine.

The Swans can appeal to the Appeals Board on the grounds that the sanction imposed was "manifestly excessive" but are yet to make a decision.

AFL Players Association president Patrick Dangerfield on Wednesday suggested the punishment did not fit the crime.

"We're doing some work around that and just how fair that is and how that sits with the consistency around other fines for incidents we've seen over the last few years.

"I think there's still some work to play out there."

AFLPA chief Paul Marsh said the players union supported the use of on-field microphones despite the broadcasting of Rampe's remarks.

"We support the use of on-field microphones on the basis they bring fans closer to the game and provide a better spectacle for viewers," Marsh said in a statement.

"While from time to time, on-field microphones will pick up on inappropriate comments and language – and to his credit, Dane apologised for his comments – the players recognise the valuable role they play in the promotion and betterment of the game."

The Swans are set to be without superstar forward Lance Franklin for the trip to Hobart to take on North Melbourne due to a hamstring issue.

The club had initially believed the issue to be minor but he is now in danger of missing a fourth consecutive game.

"Lance Franklin pulled up sore from our final training session last week and didn’t get up for our game against Essendon," Swans football manager Charlie Gardiner said.

"Our medical team have said that he is probably more unlikely than like to play at this stage.

"I am not expecting Lance to take the field against North Melbourne."

Key forward Sam Reid, however, is expected to line up despite copping a knock to his hip last week.

"Looks like he will be OK," Gardiner said. "He is getting lots of treatment and I think he will come up for this week’s game."