NSW star Kylie Hilder has declared she is "definitely retired" after an unexpected late call-up in the women's State of Origin clash on Friday night.

At 44 years of age, Hilder ran onto Sunshine Coast Stadium following a back injury to Keeley Davis and became the oldest player in history to pull on an Origin jersey. 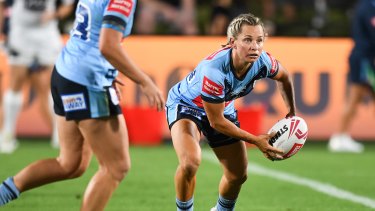 At 44-years old, Hilder ran onto Sunshine Coast Stadium following a back injury to Keeley Davis and became the oldest player in history to pull on an Origin jersey. Credit:NRL Images

It was only until Hilder ran out onto Sunshine Coast Stadium that the reality of the situation hit.

"We were about to kick off and the nerves really hit," she said. "I hadn't played footy for about six weeks so I knew that first tackle and that first hit was going to hurt."

Hilder proved instrumental in the Blues effort, providing steel to the pack. However, her comeback wasn't enough to stop the Maroons on Queensland turf.

NSW stormed back from 24-6 down to nearly take an unlikely victory.

For Hilder, the Blues camp in itself was the perfect way to leave the game.

"I can walk away from the game holding my head high knowing that football, it's a game, but forming relationships and friendships means a lot more than losing a game of footy."