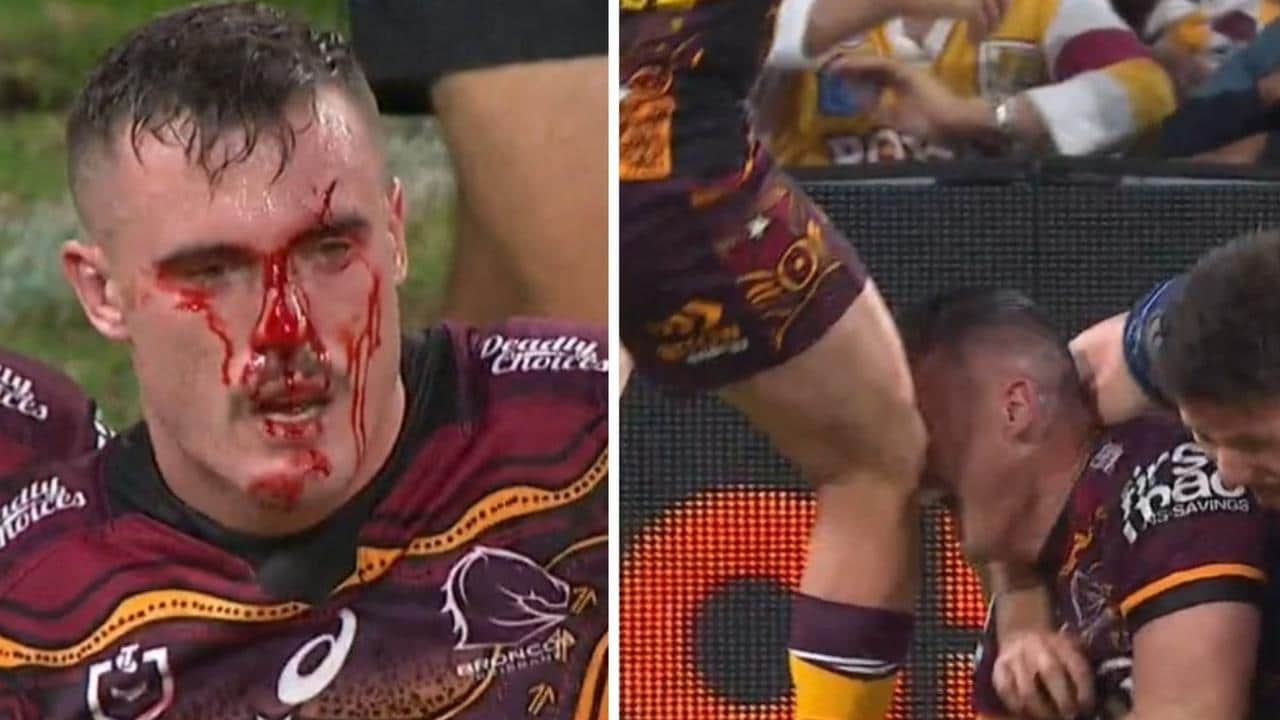 The Brisbane Broncos have crashed back to earth in another crushing 40-12 loss to the Melbourne Storm at Suncorp Stadium and one moment has made crystal clear why.

The result was the Broncos’ 11th straight loss to the Storm at Suncorp Stadium, dating back to March 2009 in an Ivan Henjak coached side that had the likes of Darren Lockyer, Israel Folai and Karmichael Hunt in his first stint in rugby league.

It’s also the 10th straight win for the Storm over the Broncos.

The Storm have been the pacesetters over the past decade, while the Broncos have been on a rapid decline since the 2015 Grand Final, culminating in the wooden spoon in 2020.

While the Storm were missing a majority of the club’s spine, including Origin stars Cameron Munster and Harry Grant as well as the impressive Ryan Papenhuyzen with injury, the replacement players have all done their job.

The Storm have been on a tear lately, scoring less than 40 points just once — in a 34-10 win over the Raiders last week.

The Storm were on fire.Source:Supplied

On the other hand, the Broncos looked to continue some good form into Indigenous Round hanging with the Storm in the early stages before untimely mistakes undid all their good work.

The Storm led 16-0 at the break but scored twice in the first three minutes of the second half to make it 28-0 before the Broncos finally got on the board.

It was the last tackle with the Broncos stretched wide as skipper Jake Turpin threw a bullet pass as he got across the line.

But bizarrely, Hetherington got up with blood pouring down his face.

The replay quickly showed where it came from with Turpin accidentally kneeing him in the face.

“It was the knee of Turpin, his captain,” Andrew Voss said. “He’s got a bumblebee in the head for scoring his first try in first grade.

“Can you believe that? He scored his first try in first grade and then a nano second later, his skipper’s kneed him in the head as a post-try celebration.”

Jake Turpin accidentally kneed the youngster in the face.Source:FOX SPORTS

Hetherington had to go off for a head injury assessment.

The Twitter account of Willie Mason’s podcast The Take with Willie Mason posted: “An example of the Broncos issues is a bloke scoring his first try and then having his melon split open by his mate. This is not good team work.”

An example of the Broncos issues is a bloke scoring his first try and then having his melon split open by his mate. This is not good team work. #NRLBroncosStorm

Hetherington scores his debut try and gets his face opened up by his captain in celebration. Thanks skip #NRL#NRLBroncosStorm

When you watch the Storm in comparison and see how they follow each other up and get the flow of the game, it’s a far assessment.

The Broncos were outplayed across the park as the Storm ran in seven tries to two in the 40-12 victory.

While the Storm had 12 errors of their own to the Broncos’ 11, Brisbane missed 44 tackles and found it tough to get its attack firing.

Featuring a six different halves combination this season, the Broncos found it difficult to find any kind of rhythm.

Coach Kevin Walters put it down to “execution, silly mistakes and some push passes” cost them dearly.