When Ivan Cleary returned to coach the Panthers in 2019 after being sacked four years prior, many thought the coach wanted his shot at redemption.

Rebecca Cleary, however, believes it was a more a matter of "unfinished business". 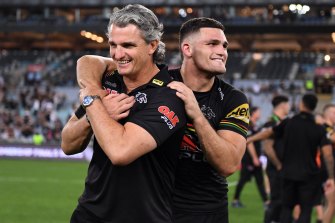 Ahead of Sunday's game, Ms Cleary has opened up about the "rollercoaster" that has led the family to the grand final.

Speaking candidly about last year's disaster season, as well as the infamous TikTok incident that showed her star halfback son breaking restrictions early in the pandemic, Ms Cleary said it's a "dream come true" to see both Ivan and Nathan happy after a dark stretch of time for the family.

"It's so nice to see the success of the boys, especially after what they went through last year and what Ivan went through," she said.

Coaching the Tigers in 2018, Mr Cleary guided the club to ninth-place before cutting his contract two years short, wishing to return to the Panthers to coach his son.

The coach received a lot of flack for cutting his tenure short with Tigers chief executive Justin Pascoe highly critical of the move.

When the 49-year-old went back to the foot of the mountains, the criticism only got louder as the side struggled.

The Panthers started the season with eight losses in their opening ten games. The team finished in 10th place and missed the finals for the first time since 2015.

"It was really difficult for our family," Ms Cleary said. "Ivan made a call and got criticised for it but in the end, it was something he believed in.

"There was a photo I saw the other day of them cuddling each other and smiling, that just brings a tear to my eye because that's what its all about and that's what they wanted to happen."

The Clearys now believe that nine is their lucky number.

Last week, Peter V'landys sung the youngest Cleary's praises over how he bounced back the incident, stating that a "lesser person" would have crumbled under the pressure.

Cleary was suspended for two games and fined $1000 by police after a group of women visited his home amid the height of the pandemic.

The player was found to have lied to the NRL integrity unit about how long the group stayed at his home after one of the visitors uploaded a TikTok dance to social media.

"That's absolutely a lovely thing for him to say and I totally agree," Ms Cleary said about V'landys comments. "As a mum, it still hurts when you see stuff like that.

"At the end of the day, he's only 22 years old … at that age sometimes you do mistakes but as long as you can learn from them and become a better person, that's all a mother could ask for."

In fact, Ms Cleary wholeheartedly believes Nathan growing up and watching his father handle criticism has given him the strength to deal with the outside noise.

"Last year, all the stuff that was going with Ivan, that probably made him get a little bit of resilience," she said. "He probably really toughened up and he's done a lot of self-help this year which I think has helped with his development and the way that he thinks.

"That's helped him develop and to become the person that he is and to be able to go through these hiccups through life."

While Ms Cleary wasn't at the Dally Ms, she certainly heard about it.

At home watching the ceremony with Nathan's three siblings on the television, the suspense was soon spoiled after The Daily Telegraph accidentally published the winners early.

Nathan's parents knew but he was kept in the dark. Jack Wighton was crowned winner, despite Nathan being a stand out favourite.

"We were just thinking is this a joke, when you saw [the result] was all out there," she said. "But well done to Jack, he deserves it, it's just probably a shame … at least it was kept away from the boys."

Ms Cleary says it's been a grand final week like none other thanks to COVID-19.

Ivan coached the New Zealand Warriors to the 2011 NRL grand final against Manly, before the team lost 24-10. The pandemic has completely changed how grand final week usually runs, she says.

With her son living out of home, she has barely been able to spend time with him this at all this season, let alone this week, due to the NRL bubble restrictions.

"It's a completely different look compared to what it has been when we've been there before," she said. "We are living in Newport, Ivan me and the three others kids and my daughter's boyfriend, but we have been spending a lot of time in Penrith this week … it's good to get amongst it."

Ms Cleary says looking back five years ago when Ivan left the club – she could have never imagine where they are now in 2020.

"Until the opportunity rose I don't think we probably thought that it would happen," she said. "But I'm super excited that it did. "For myself, after what we went through last year, football is such a rollercoaster.

"It was pretty low last year and to be so high this year just believing, having the confidence … you think they can't lose."

Live after the grand final

Just to make a chaotic month even more crazy for the family, the pair have recently opened up their own local business in Newport.

Ivan and Rebecca launched last Friday a Pinot and Picasso art studio ahead of the summer months, where people attend a painting workshop while drinking wine. The couple decided to launch the business after attending one of the workshops themselves ahead of COVID-19.

Ivan hung his wife's painting up in his office, but Ms Cleary says Ivan is a "much better" artist than her.

"It was pretty crazy because we only launched on Friday and then the boys won," she said. "There wasn't one around here and I loved the concept and it's fun."

Argentina make touching tribute to Maradona on jersey against Wallabies