Mick Potter will coach the Bulldogs for the rest of the season after officially being announced as caretaker coach.

The former premiership-winning legend will be in charge for Canterbury’s game against the Tigers at Leichhardt Oval on Friday night after the Bulldogs announced his signature on Wednesday morning.

“It is great to have a genuine legend returning to the club,” Bulldogs general manager of football Phil Gould said in a statement. “Michael has extensive experience in the game and will bring a new voice and new ideas to our players.

We really appreciate Michael stepping up to help our club at this time.“

Potter was excited about the opportunity to help the club through an important period.

“I’m very honoured to be back at the Bulldogs,” he said. “I wish it were under different circumstances as I’ve known Trent for a long time and I really feel for him.

“I will do what I can to help the club at this time.”

Sources with knowledge of the situation told the Herald on Tuesday that Potter was expected to be asked to leave his job as coach of feeder club Mounties in the NSW Cup to take over from Trentt Barrett for the remainder of the year.

It came as Bulldogs head of strength and conditioning Dan Ferris also departed the club in the aftermath of Barrett’s demise.

Potter last coached in the NRL at the Wests Tigers for two seasons before the club opted against extending his contract following the 2014 campaign. Potter, who had a 50 per cent win record in his time coaching in the Super League and NRL, is coincidentally expected to begin his Bulldogs coaching stint on Friday against his former team, the Wests Tigers, before seeing out the season. 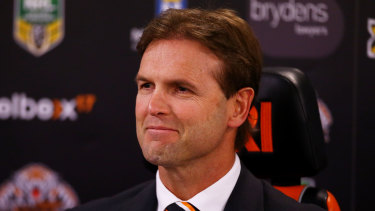 Michael Potter hasn’t coached in the NRL since his time at the Wests Tigers.Credit:Getty

Utility back Brent Naden is also set to come up against his old club after the former Panther was released on Tuesday by the Dogs to join the Tigers until the end of next year.

The Bulldogs will use the time to find a new coach for 2023 and beyond, with general manager Phil Gould saying the club needed an “experienced man” to do the job in the future.

The 58-year-old played 80 games for the Bulldogs over six seasons between 1983 and 1988. He became the first fullback to win a Dally M Medal while at the club, and also featured in Canterbury’s premiership triumphs in 1984 and 1985.

Potter has coached all around the world since his retirement from rugby league in 1996. His first head coaching role was with the Catalans Dragons in 2006. 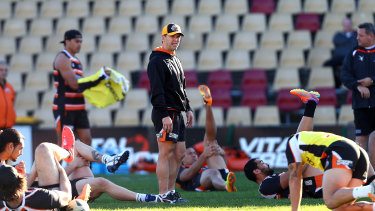 He continued coaching in the Super League with St Helens and Bradford before returning to Australia for his first head role in the NRL with the Wests Tigers in 2013 when he replaced premiership-winning veteran Tim Sheens.

His time at the Tigers was overshadowed by the handling of Benji Marshall, who left the club under Potter’s watch to sign with Super Rugby franchise Auckland Blues.

One of the men mooted as a potential long-term replacement for Barrett, Blues coach Brad Fittler, was keen to distance himself from the debate.

“I will be coaching the NSW State of Origin team,” Fittler said.

Barrett’s departure has upset Steve Hansen, the long-time All Blacks coach who joined the club as a consultant. Hansen and Barrett had become close over the past 18 months and the Rugby World Cup-winning mentor was disappointed about the development.

“Yes, the results haven’t been what they wanted but there’s a lot of reasons for that and I don’t think it’s Trent Barrett’s coaching.

“However there’s a lot of pressure on the club and when it’s like that you need everybody to stay strong and face into the breeze and work through the issues that are there and come up with the right solutions.

“This will end up being their fourth coach in five years so it doesn’t make sense to me. Trent’s a good coach, he’s not the finished product by any stretch of the means but he’s going to be a very good coach.

“I’ve been lucky enough to deal with a lot of young coaches in my time and he’s one of the better ones. It’s not the answer. The answer is about fixing the problems that are a lot greater than just the coaching.”

The bloodletting at Belmore continued on Tuesday after Ferris left the club. The decision was made after Gould and Ferris spoke, leaving another vacancy to be filled. 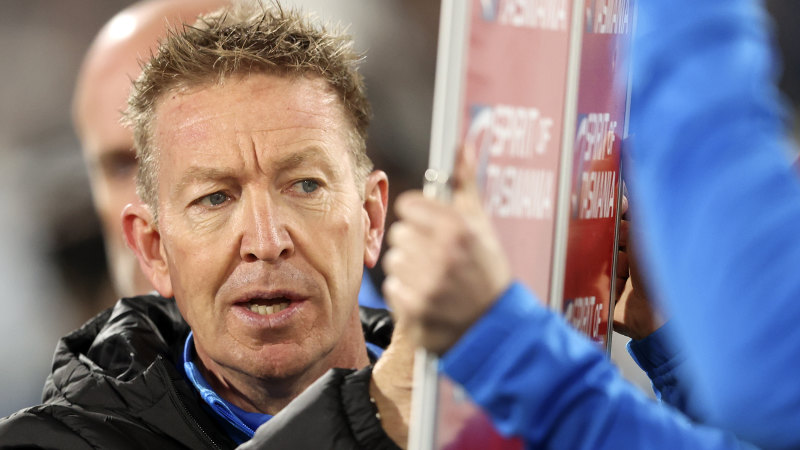 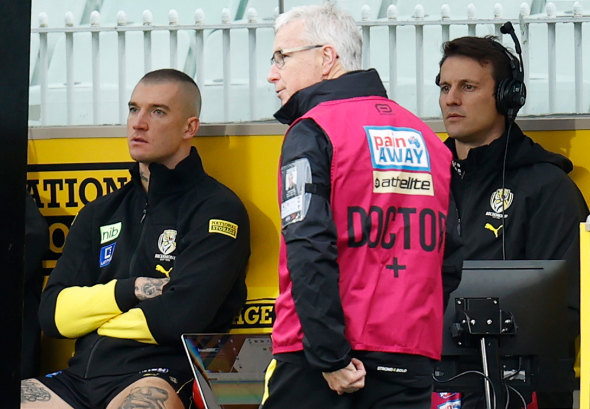