Luke Beveridge insists the Brisbane Lions will have to “pony up” for Josh Dunkley during the AFL trade period after the want-away midfielder claimed the Western Bulldogs’ best-and-fairest award.

Dunkley was as a narrow winner of the Charles Sutton Medal on Wednesday night, just days after making his request for a trade official. 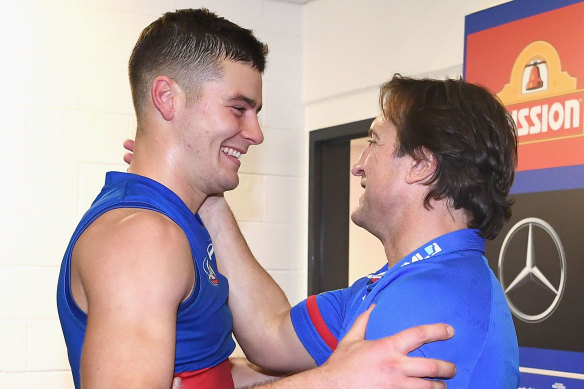 Bulldogs coach Beveridge described the pending move as “the elephant in the room” before presenting Dunkley with the coveted award.

“The obvious thing is that the Lions are going to have to pony up,” Beveridge said.

“Sammy [list manager Sam Power] is going to go to work on that over the next week or two.”

If granted his trade wish, Dunkley will sign a long-term deal with the Brisbane Lions that Beveridge indicated the Bulldogs could not match.

The 25-year-old, who averaged 25.4 disposals and 4.4 clearances a game this season, will leave a big hole in the Dogs’ engine room.

“He’s extremely well respected by everyone within our football club, and obviously, it’s a real shame,” Beveridge said.

“I describe Josh as the glue in our team. He does all the hard team things unconditionally and we’re going to need more of that from his teammates, or former teammates, next year.

“He’s a real diamond that we discovered and pinched from under Sydney’s nose all those years ago.

“It’s difficult to come up and match market value when you’ve got to spread the financial load across your whole group.

“That’s part of it, but Josh has also made a life decision on where he sees his future and where he’s going to live and what it means to him at this point in time, and we respect that.”

Beveridge and Dunkley struck a deal weeks ago that the midfielder would “see it through” with the Bulldogs until their best-and-fairest night, regardless of what decision he made on his future.

The coach said the two parties had invested too much into each other over the years for the relationship to end badly.

“We’ve had a couple of conversations since and the most deflating one was when he called me to let me know what the decision was,” Beveridge said.

“Again we had that chat and I reminded him of his conviction and he promised me he’d be here.”

An emotional Dunkley has described his trade decision as a “lifestyle choice” and lauded Beveridge as a “father figure”.

Dunkley became the 13th Bulldogs player of more than 1000 in the club’s AFL/VFL history to play in a premiership, reach 100 games and win a best-and-fairest award.

Dunkley was part of the Dogs’ drought-breaking flag in his debut season (2016).

Keep up to date with all the AFL trade action this week with our daily newsletter. Sign up here.