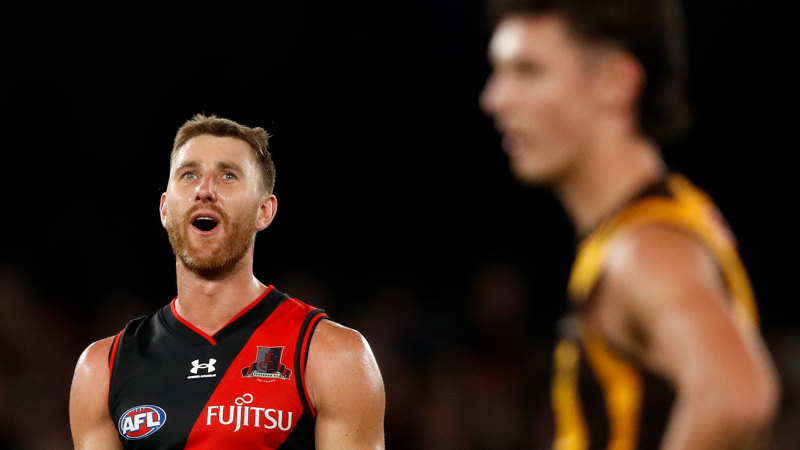 Devon Smith’s short-term availability remains in the air despite answering Essendon’s SOS call on the weekend, as milestone man Dyson Heppell urged the Bombers to maintain their instinct and flair, and insists he will keep smiling at training.

Competition for places at The Hangar will be hot this week as the Dons weigh up whether to reward the 22 who defied the odds against Hawthorn or stay true to the pecking order that existed before a virus swept through the club.

Smith was to undergo a two-week strengthening and conditioning program on his degenerative knee but was drafted into the team at the last minute after five players pulled out due to illness. He performed admirably with six tackles and three goal assists to go with his 10 possessions.

The Bombers will wait until their main training session of the week on Thursday before making a call on what to do next with Smith, the 2018 club champion who has twice been dropped this year. 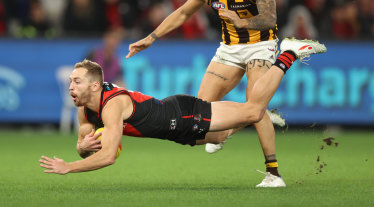 Amid the drama and in a week when the club board grilled coach Ben Rutten over a season gone wrong, the Bombers produced a stunning eight-goals-to-one final term to topple Hawthorn at Marvel Stadium last Saturday.

Having over-used the handball, particularly defensively, in previous weeks, the Bombers returned to a more direct style, while Zach Merrett’s shift to a forward-half role after half-time worked a treat. Overall, there was greater energy and endeavour at stoppages and around the ground.

Although a 2-6 win-loss record makes life difficult, there is still hope of a correction, as the Bombers head to Sydney to face a Swans’ side seething after last weekend’s shock loss to the Gold Coast Suns.

“Not so much an element of simplified, I think it was just an air of freedom for the rest of the playing group, and it seemed to click for us, guys playing on instinct, playing with flair,” Heppell said on Tuesday when questioned about Rutten’s game-plan.

“We seemed to get our real drive and energy back in our ball movement. We felt really connected as a unit throughout the game. Hopefully, we can carry that forward.”

Alec Waterman, Jordan Ridley, Jake Kelly, Matt Guelfi and Sam Durham were all forced late changes against the Hawks because of illness but Heppell expects all to be in contention for selection. Ruckman Sam Draper had also been ill but managed to play, and was one of the more vigorous players.

“I think we’re holding pretty tight at the moment, a few of those boys went down last week but we’ve got them back amongst the club now,” Heppell said.

“They’ll try to blow a bit of steam out in the first couple of sessions early in the week but that should be right to go.”

The Bombers will have added motivation in Sydney, for Heppell, 29, will celebrate his 200th match. The hard-running skipper has endured much throughout his 12 years at the club, including the lost 2016 season when he and 33 other Essendon players were suspended after an appeal by the World Anti-Doping Agency.

“I would rather a journey of going through hard times and different circumstances and having to work through that. Some of my proudest moments are getting through adversity and coming out the other side stronger. I have loved every minute of it,” Heppell said.

Heppell took aim at commentators who had questioned why the Bombers were smiling and appearing to have fun at training despite their woeful start to the season. St Kilda great Nick Riewoldt said having fun “was the worst thing you can do because we know the game is so hard to play”.

“I heard it (the criticism) second-hand, I didn’t see much of it, but people send a couple of things through,” Heppell said.

“Genuine carry-on from a lot of people – are you going to tell your kids or wife to stop smiling because they have a bad day at work? I’m always an optimistic, positive type of bloke and I’m always going to come in as my authentic self and that’s enjoying my time here and celebrating my teammates, whether that’s in a win or a loss.

“You still get around teammates, you celebrate them and try to enjoy this environment and bounce back out of it.”