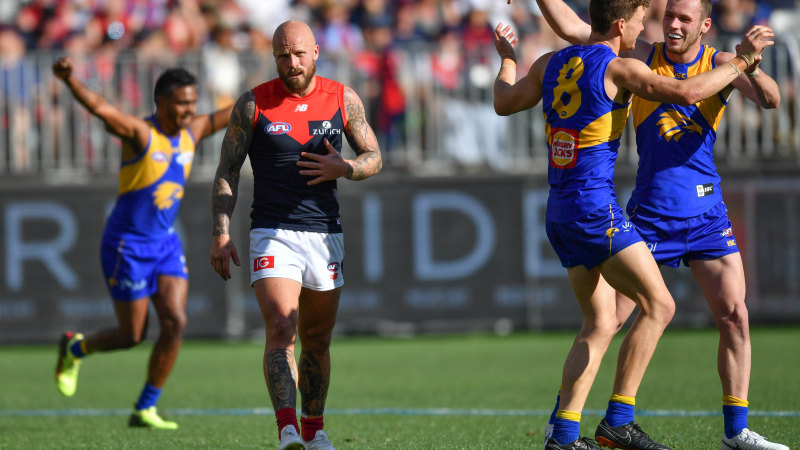 On paper, form and stakes, West Coast versus Melbourne shapes as one of the least appetising games of the 2022 season.

It might well prove to be barely watchable, given the vast disparity in talent and performance between the clubs, one of which has been eviscerated by COVID and injury and seems depleted of spirit. Certainly, we should be thankful that it’s on the late Sunday timeslot.

But if this game offers an opportunity for footy fans – Demon fanatics and ghoulish Freo folk excepted – to finish mowing the lawns or escape to the Spanish film festival, it also represents a new benchmark, or milestone, for football socialism in the reign of Gillon McLachlan.

Melbourne are rated as $1.01 to win the game, which I know because I went to the AFL website and the odds for both teams have pride of place on the match centre page – a reminder that whatever pieties the AFL mouths in favour of social responsibilities, they don’t walk the walk when it comes to gambling.

So, in essence, the bookies and the punters have assessed that Demons can’t lose, and that West Coast has less than Buckley’s hope.

It’s incredible to think that these teams have diverged so sharply, given that Sunday’s West Coast team has the same goal-to-goal line as the 2018 preliminary final: Tom Barrass, Jeremy McGovern, Jack Darling, Josh Kennedy.

Of the current 22, Liam Ryan, Jamie Cripps, Liam Duggan, and Jack Redden also played on that dismal Saturday afternoon, when the Dees didn’t score a goal in the first half and went on to a season of embarrassing under-achievement in 2019, when they finished 17th.

For their sins in 2019, the Demons were able to snare Luke Jackson – whom the Eagles would love to bring home to Perth – at pick no.3 in the draft, adding another weapon to a team that was already locked and loaded with Christian Petracca, Clayton Oliver, Max Gawn, Steven May and Jake Lever. They also traded in Ed Langdon from the Dockers with their second round pick and drafted in Kysaiah Pickett.

So, Melbourne used a terrible season to help themselves to a premiership and a prospective dynasty. They took advantage of the competition’s rules – the draft most of all – that comfort the afflicted and afflict the comfortable.

Unlike some other clubs, the Demons chose wisely with their picks and trades, they improved their game style, coaching panel, shifted their culture from “me” to “we” and the result has been a juggernaut.

Conversely, West Coast topped up with Tim Kelly, misread their list’s trajectory (declining) and have found themselves on the bottom, with further pain ahead as the premiership stars are gradually replaced by draftees; it will turn, the question is how long the recovery takes.

By any measure, West Coast are the most financially powerful club in the competition. They’ve a waiting list for members and sponsors, for heaven’s sake. Melbourne, conversely, have spent much of the past two decades in debt or in fiscal quicksand. The Dees received an estimated $132 million from the AFL in total funding over the past decade (sixth most), compared to West Coast’s $93.5m.

Under McLachlan, the weaker clubs have prospered in relative terms. They’ve been given the funding to pay full salary cap for players, plus enough to have the same football department spending as the monsters like West Coast, Collingwood and Essendon. It’s not by accident that the past decade has seen three droughts broken, including the unthinkable Bulldogs flag of 2016 and the Demons of 2021 (Richmond are different, a dormant power rather than bona fide Cinderella).

If the competition is genuinely meritocratic – a debatable proposition – then the Demons have succeeded, in large part, by dint of excellent list management. This means picking the right players, at the right price.

That said, who among us could have projected a time when the West Coast Eagles would be given virtually no hope – the same or worse odds as the expansion teams in their first seasons (when they had kids and few senior players) – when playing Melbourne at home?

Judged by the odds and prospects of these two teams, one could argue that this potentially gruesome match is a kind of apogee for equalisation in the AFL. The fact that the most financially powerful club could be so weak on the field in comparison to a small club is unusual.

Yes, North Melbourne were a super team in the ’90s, but the advent of bigger football budgets, starting in the 2000s and peaking around 2012 opened up a sizeable gap, which the AFL has closed with the soft cap and by handing television dollars to the weaker clubs.

One can also argue that 2022 – and therefore this particular mismatch – doesn’t reflect the reality of where West Coast and Melbourne sit, or the full expression of the AFL’s equalisation policies because there is one major anomaly: COVID. “It will affect some teams more than others,” observed ex-Bulldogs president Peter Gordon, a champion of the “Any Given Sunday” concept the AFL has adopted.

The virus has hit the Eagles like no other club this season and weakened their team on a weekly basis. That, in concert with injuries and list holes and maybe poor morale has rendered them 1-7 with a percentage of 52.

The irony of this game is that equalisation and McLachlan’s embrace of footy socialism were measures designed to prevent what we have today – a club that’s given no hope, at least on this given Sunday.