Chief executive Andrew Abdo has defended the NRL's decision to axe the national anthem for this year's State of Origin series, explaining that the move is simply about making the game more intense.

Game one on Wednesday at Adelaide Oval will be the first time in the series' history the anthem will not be played. 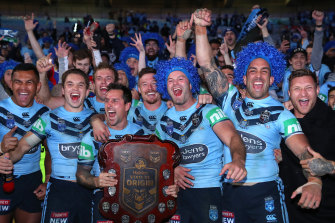 Game one on Wednesday at Adelaide Oval will be the first time in the series’ history the anthem will not be played. Credit:Getty

Earlier this year, the ARL Commission scrapped the national anthem at the All-Stars match following advice from senior Indigenous players including Latrell Mitchell.

The move came after the majority of the Indigenous side did not sing the anthem during the clash in 2019.

At the time, Australian Rugby League Commission chairman Peter V'landys said the scrapping of the anthem was vital in demonstrating one of the important roles of the commission: to consult with players on issues that impact the game.

"The All Stars game was created as a celebration of Indigenous players and their culture," V'landys said. "We have listened to our players' concerns that the words of the anthem do not represent them or their families and does not include an acknowledgement of First Nations people.

"We respect their wishes and have agreed that the anthem will not be played."

Argentina make touching tribute to Maradona on jersey against Wallabies