That kid – yes, I still call him a kid – Stephen Crichton is looming back on the inside after Viliame Kikau swats away Cowboys defenders like annoying summer flies and it's another try for the Panthers. Lock in Crichton, now with 15 tries, as NRL rookie of the year?

Nathan Cleary doesn't make any mistakes with his conversion attempt this time. It's 10-0 and we're only 12 minutes in.

The minor premiership is getting ready to be shipped to the golden west.

It hasn't taken them long and the Panthers are on the board first.

Dylan Edwards, off the back of a fast Isaah Yeo play-the-ball, kicks neatly into the corner for Brian To'o to score. Danger, danger for the Cowboys.

Nathan Cleary misses the conversion, but the visitors have an early 4-0 lead.

Panthers want minor win not to be major problem

Penrith could technically have been presented with the JJ Giltinan Shield tonight, but it wasn’t on their chartered flight to north Queensland.

Instead, if they do finish as the best team at the end of the regular season they will be presented with the trophy at ANZ Stadium next week after their match against Canterbury.

There had been some scuttlebutt they might get the trophy when they host a final in the opening week at Penrith. Coach Ivan Cleary quickly put that one to bed, and he hopes any conjecture about top spot will be the same by 8pm. 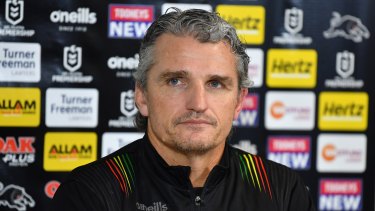 Coach Ivan Cleary has his Panthers purring as the finals approach.Credit:NRL Photos

Our second match won’t have any bearing on top spot, but it will have a big say on who will finish bottom. The Broncos – yes, the Broncos – are now dead last. If they can’t beat Parramatta at Bankwest Stadium tonight or the Cowboys next week it will be the first wooden spoon in the club’s history.

Mind you, there’s also a fair bit at stake for the Eels, who haven’t been themselves of late and need to win to ensure they can stay entrenched in the top four.

And the last time Brisbane visited Bankwest Stadium … they were belted 58-0 in the first week of last year’s finals, the biggest lost in the club’s history (until the Roosters beat them 59-0 this season).

Who knows what will happen tonight. 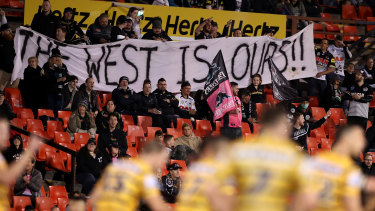